Why Gremlins Is the Scariest Film I’ve Ever Seen 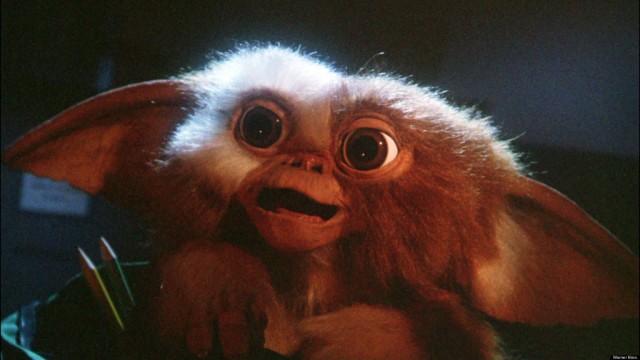 I love Halloween. Like many of you, it’s one my favorite times of year. It provides an excuse for watching horror movies for a month straight and for eating enough candy to make me see sounds. The thing is, though, while I enjoy watching Sam Neill slowly driven mad in the film In the Mouth of Madness or watching Pinhead discuss the virtues of wearing a leather dress in Hellraiser, horror films don’t scare me. Maybe it’s because I’m dead on the inside, but I don’t get frightened by that type of imagery. I enjoy consuming movies like The Texas Chainsaw Massacre and the Nightmare on Elm Street series, and I can appreciate them for their storytelling and the artistic choices of the filmmakers; but, except for the occasional jump, I’m typically not moved to being frightened by any so-called scary movie. Never have been.

With one exception: Gremlins. [your laughter here]

Before you protest while laughing uncontrollably, I know what you’re about to say:

“It’s so funny! They sing along to Snow White!” (Yes, a bunch of reptilian bipeds who’ve just slaughtered many of a town’s residents is hysterical.)

“It’s about the dangers of consumerism!” (Maybe, but my TV and DVDs are murdering me in a slow way, not an overt, run-me-over-with-a-tractor sort of way.)

I saw Gremlins when I was 5-years-old, shortly after the film hit theaters. I am willing to admit that my age, along with my older brothers yelling “Gremlins!” whenever I entered a darkened room, didn’t help my phobia of the green little bastards. However, while I am now a grown man who knows gremlins aren’t real and isn’t actually afraid of the film anymore, there’s a reason I still feel a repulsed chill whenever I stumble across a picture from the film. (Gremlins 2: The New Batch, by the way, never bothered me. It was more cartoon than comedy-horror hybrid that the first fill purported to be.)

Let’s look at the facts and examine why this movie is still the scariest film I’ve ever seen, and why we must prepare ourselves from the slightest hint of a gremlin attack in the future. 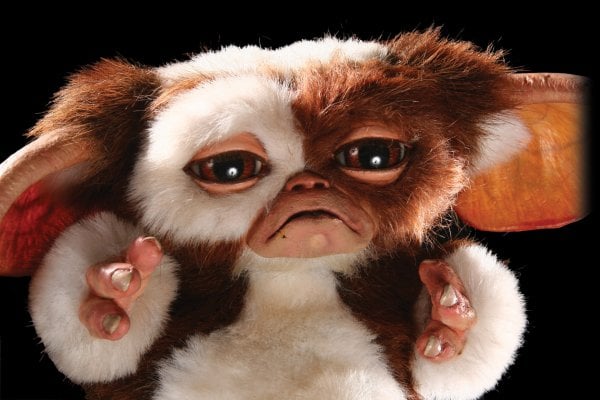 First off, am I the only one mystified by the fact that nobody who comes across Gizmo or the other Mogwai—from Rand Peltzer, to his wife, to his son Billy, to Billy’s girlfriend Kate, to Corey Feldman—aren’t properly in awe of encountering what, as far as they know, is a new species of animal, an animal that can’t get wet (the Hell?), be exposed to bright lights, or feed after midnight? Oh, they give the obligatory oohs and ahhs, but, on the whole, just shrug when being met with what appears to be a type of mammal they have never seen before.

By all accounts, aside from the fact that Gremlins contains mystical creatures that terrorize a town and make even the most vile of humans turn to Jesus, the world in which the characters inhabit seems much like our own. Maybe I’m different than most folks, but if I were to come up against a new species who, not only seems to have an intelligence that rivals most higher level primates AND has rudimentary abilities for speech, I would be turning to all the gods and flying spaghetti monsters I could find and asking for the proper forgiveness, because damn. Am I the only one seeing the disconnect here? And speaking of intelligence… 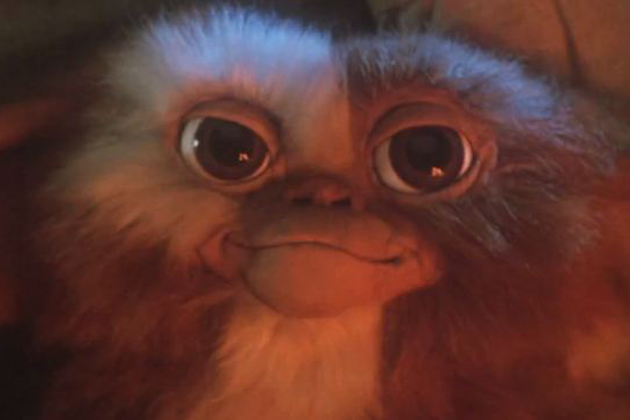 A Little Knowledge Is a Dangerous Thing

I have two bassets and I adore them. They keep me laughing and they cheer me up when the world is grey. However, if they were to somehow make an evolutionary leap overnight and have the ability to, say, open Christmas gifts and play video games, as did Gizmo’s spawn in Gremlins, as much as I love Otto and Igor, I have no doubt that I would be filled with sleepless nights of sheer terror. Not because I fear that the puppies would harm me; they’re sweethearts through and through. Still, I don’t know where their newfound intelligence would end and their natural animal instincts would begin. Using their spark of sentience, they may very well wish to engage in communication heretofore elusive to their abilities, or bite my throat in my sleep for not giving them treats when I know damn well where they’re hiding.

Now, imagine that you encounter a new species that already has that innate intelligence and a clear understanding of how to employ it to get what they want. Why would you not be on guard? Billy and company know-ish that Gizmo is pretty harmless, even though, again, he’s a species with a degree of intelligence not seen in any other animal besides humans. However, as the characters themselves even note, Gizmo’s Mogwai spawn are more aggressive and seem to take joy in low-grade trickery. Why wouldn’t the humans be somewhat concerned about this? To his credit, Billy half-asses an investigation into the nature of the Mogwai by leaving one with his science teacher who, despite the fact that I would call his reaction just a notch above surprised, seems to be the only character in the film who thinks that maybe this shit ain’t copacetic.

And this doesn’t even take into account the stuff that the Mogwai spawn do that the Peltzer family is oblivious to, including terrorizing the family dog and tricking Billy into feeding them after midnight. 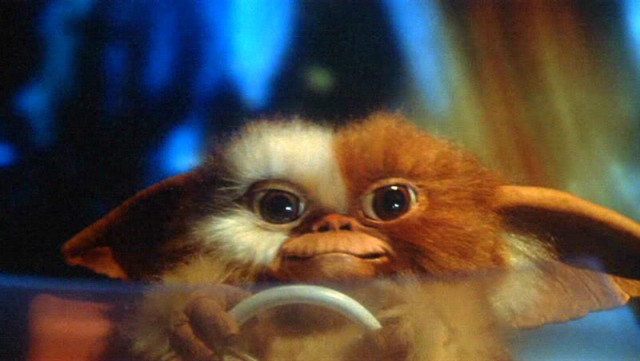 Metamorphosis, Or Why I Have No Sympathy for What Befalls the Characters

Read that last sentence again: “…tricking Billy into feeding them after midnight.” This suggests that the Mogwai spawn not only know the rules, but are actively trying to circumvent them. Why? Either it’s an instinctual mechanism that makes the Mogwai want to advance to the next stage of their evolution—which seems to be absent in Gizmo, curiously—or they know full well what will happen once they have a post-midnight buffet.

Either way, the result is the same: Billy and his mom find the Mogwai in their pupa in the attic, five green cocoons for each of the Mogwai. Look, I’m not advocating killing another creature, even one with the intelligence that the Mogwai have exhibited, but, at this point, I’m out. Done. Asexual reproduction in talking mammals? The heroes shrug. Obvious intelligence? Meh. Something is clearly up with these creatures. However, now that what are, as far as any of us know, mammals (or demonic hellspawn, take your pick) have clearly entered a metamorphic stage of existence in cocoons resembling sinister-looking globs of snot—no. All sorts of no. Billy should have done what was necessary to protect his family: walked to the garage, grabbed the hedge clippers, and gone all stabby-stabby to the cocoons.

Some may protest that Billy had no way of knowing what the Mogwai were transforming into, to which I will say that nothing good is coming out of a cocoon containing something that was once furry. Shit’s sideways, and there’s only one course of action that’s sensible. Instead, Billy did the horror movie equivalent of walking into the dark woods alone. I have no sympathy for that brand of idiocy. 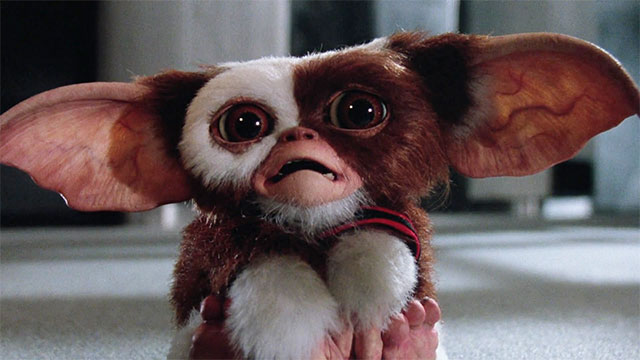 A Multiplication of Gleeful Evil

And because of Billy’s uselessness, the cocoons hatch, producing, as we all know, gremlins, reptilian bipeds resembling demonic hellbeasts. Once they have completed their metamorphosis, what do they do? As anyone in the audience could have told Billy, they immediately commence to wreaking havoc in the Peltzer household and attempt to murder Billy’s mother. Not in a slow, plodding, Jason Voorhees sort of attempted murder, but a “holy Hell, why why why are they so fast?” kind of attempted murder. While most of the gremlins are dispensed with by Mother Peltzer and Billy, doing the first sensible things they’ve done since the film began, the leader, Stripe, gets away, takes a swim at the local YMCA, and reproduces enough gremlin spawn to overrun the city. Spawn who, as I’ve already noted, has eerily advanced intelligence and can make cognitive leaps in a matter of hours.

Finally, this is where we get to the heart of why Gremlins scared me so much as a child. It’s not that they are demonic-looking creatures. It’s not that they act as locusts, devouring whatever is in their wake. It’s not even that they cause chaos and sow discord. It’s all of that, topped with the fact that the gremlins took such glee in torturing the human populace. As despicable as Jason Voorhees and Freddy Krueger were, I could understand their motivations. I didn’t agree with them in the least, but at least there was a reason behind their evil acts. The gremlins, on the other hand, committed vile acts for the sake of committing vile acts. Whether it was disrupting traffic lights to cause car wrecks or running over Mr. Futterman with heavy machinery, not only did they did poke at the fragility of humanity, they reveled in it. And as a kid, and even now, I don’t know if that evil was a result of their base animalistic urges or if they were conscious enough to take glee in the suffering of others. The same creatures who were content enough to drink beer in a bar are the same creatures who had the wherewithal to distract the hateful crone Mrs. Deagle while they rigged her stair-chair to send her to her ultimate doom. She thought that the gremlins were demons when she answered to some of the creatures singing Christmas carols.

That’s the only sensible thing anyone in that town thought during that entire movie.

And before you ask, yes, I will be watching Gremlins during Halloween. Have to work on building a callous over my heart in case I’m wrong and they’re real.