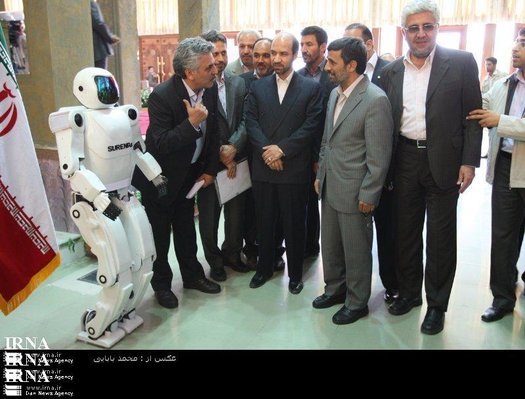 Iranian President Mahmoud Ahmedinejad spent Saturday, Iran’s official Day of Industry and Mine, hanging out with his new best friend Sorina 2 (you don’t want to know what happened to Sorina 1). This humanoid robot is Iran’s second ever, and it’s a little bundle of adorable.

The robot simulates human motion as best it can. Its feet can pull of 12 degrees of movement and its hands can pull off eight. According to a press release, Sorina 2 is prepped for “carrying out sensitive tasks in different situations.” That could either be very handy or very creepy, depending on what situations and sensitive tasks we’re talking about.

But perhaps the most amusing part of this development is the expression and gesture of the man next to Sorina in the above picture. I like to imagine he’s saying “I thought I was a partier, but THIS GUY – don’t even get me started on this guy.”

And yes, Sorina has an obvious resemblance to Honda’s Asimo. So similar in fact, that there’s only room for one of them, I say. Then, it’s agreed! Robots ready? Robots, robattle!