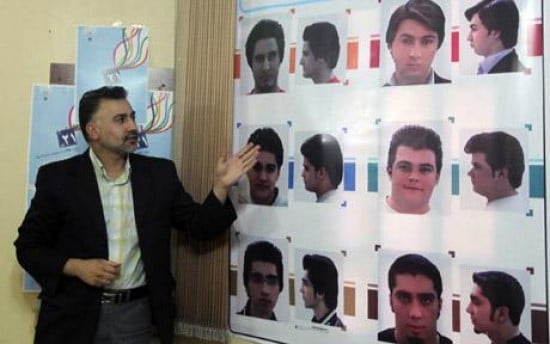 Today in things that will not make the Iranian government seem bizarre and Paleolithic to the outside world: In preparation for the upcoming “Modesty and Veil” festival later this month, Iran’s Ministry of Culture and Islamic Guidance has released an official guide which lays out which haircuts are approved for men.

According to ABC, the primary target for the guide was “spiky, gelled hairdos associated with rebellious youths, corrupted by Western influence.” Mercifully, goatees, which were previously not in high standing with the Iranian government, are now considered OK. But don’t think you can get away with a ponytail or a mullet, corrupt Steven Segal-influenced Westerner:

The list of banned styles includes ponytails, mullets and elaborate spikes. However,quiffs appear to be acceptable, as are fashioning one’s hair in the style of Simon Cowell or cultivating a 1980s-style floppy fringe.

Most of the models are clean-shaven although one picture features a man with a goatee beard, previously frowned upon by Iran’s conservative clerics. Using hair gel is also within the law, albeit in modest quantities.

Back in 2007, the Iranian government inspected more than 700 barber shops in Tehran and shut down over 20, concerned that they were promoting such decadent practices as men’s eyebrow plucking.