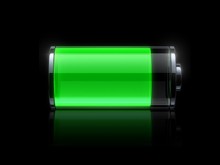 According to Soneira, if owners of the new iPad want a legitimately full charge, they’ll leave their ipad plugged in for at least one full hour after the display says the battery is full of juice. He emailed Ars Technica and told them he discovered this by measuring the power drawn by the AC adapter, and found that power continues to draw an hour after the iPad’s battery display reached full capacity. He notes that other mobile devices also lie about their actual charge capacity, and it is generally good practice to leave your device plugged in for a bit after it says it has reached full charge.

As always, there are other ways to improve a mobile device’s battery life, with turning down the brightness of the screen and shutting off wireless settings when possible being two of the more common tricks, but going by Soneria’s report, actually charging the device to full would probably help. It shouldn’t be too inconvenient, as this blogger has no trouble leaving things plugged in after their battery displays full capacity — it’s not like people are foaming at the mouth to use a device right when it reaches full, and it isn’t like people can’t just respond to that text message or continue browsing the web while the device is plugged in.