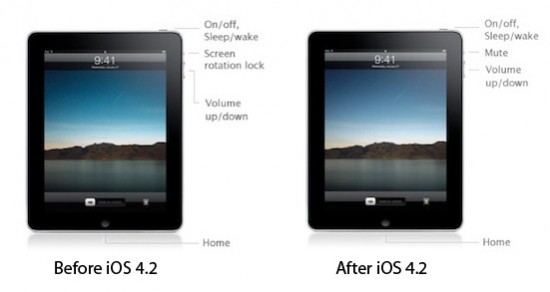 In what’s likely to be a source of much irritation for iPad owners, Steve Jobs has confirmed that once iOS 4.2 kicks in for iPad owners sometime within the next few weeks, the screen rotation lock button, which allows you to lock the screen orientation in either portrait or landscape mode rather than subjecting it to the whims of your accelerometer, will become a mute button. This will apply to everybody, and there will be no configuration option.

Orientation-locking will still be possible, but it’ll be more cumbersome: 9to5mac reports that “As we now know, you can lock the iPad’s screen orientation via a menu to the left of the multitasking dock.” Apple reportedly instituted this switch to make the iPad more consistent with the iPhone and other iOS devices. But by virtue of its size, the iPad really is a different creature, and as someone who’s gotten a chance to play around with an iPad a decent amount, I can attest that screen rotation lock is a useful feature that one could very conceivably want to turn on and off depending on the situation with button-like rapidity.

Three reasons why this is frustrating:

1. They’re getting rid of screen rotation lock for a mute button? As you can see from the diagram above, on the current iOS configuration (left), there’s already a volume up/down button. Just hold down the volume down button for a few seconds, need for a mute button averted.

2. The obvious response here is “well, just don’t install the update when it comes out”: However, iOS 4.2 brings the long-awaited feature of multitasking to the iPad, making it pretty much necessary.

3. While Apple’s decision to streamline iOS devices is somewhat understandable, they couldn’t even nudge users towards mute by default, but include a simple toggle option? This just reeks of aesthetic purism without consideration of the iPad’s unique qualities or recognition that people will use a device with a 9.7-inch screen differently than they’ll use one with a 3.5-inch screen. Apple? Telling customers that it know what they need better than they do?

As TUAW notes, after iOS 4.2 drops, this’ll just become one more reason people use to justify jailbreaking their iPads, and they’ll have a point.