Report: iPad 2 Will Have Front- and Rear-Facing Cameras 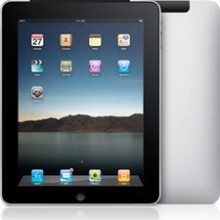 Citing multiple sources, Reuters reports that the iPad 2 — which hilarious-though-sometimes-accurate rumormongers DigiTimes reports will ship in February of 2011 for an April launch — will have both front- and rear-facing cameras, sourced by Genius Electronic Optical Co Ltd and Largan Precision Co Ltd.

You may recall that a teardown of this generation’s iPad revealed that it has a slot in the frame that perfectly fits the camera from a unibody MacBook Pro, which Apple evilly didn’t include in this generation for whatever reason. Cameras would allow videochat applications such as Apple’s FaceTime and augmented reality apps for the iPad.

Reuters’ sources also say, in accordance with other iPad 2 rumors we’ve heard, that the “new model would be slimmer, lighter and have a better resolution display.” Man, if all of these iPad 2 reports are true — they jibe with Apple’s past product release strategy, but we’d still put them in the ‘interesting rumor category’ for now — a bunch of people who got iPads for Christmas or Hanukkah this year are going to be annoyed.