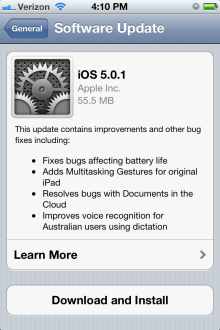 The new update for iOS 5 shipped today, iOS 5.0.1. The seemingly negligible version number doesn’t represent the potential importance of — and collective desire for — this update, as it supposedly fixes the bugs that makes iOS 5 iPhone battery life significantly suffer. Also, this is the first iOS update that is available over-the-air, rather than through iTunes.

As someone who experienced the iOS 5 battery issues firsthand — though, admittedly, not as severely as other anecdotal accounts — this update, if it actually fixes the battery issues, will allow me to turn on all of the cool iOS features that I shut off in order to preserve battery life. Most of these features are notifications and location services, two of the most useful features the operating system has to offer.

The update doesn’t take very long, and if one updates over-the-air, 5.0.1 clocks in at 55.5 megabytes, and took about 3 minutes to download and about 5 to 10 minutes to install, all of which happens automatically once you poke the download button. So, go ahead, give it a poke and pray your battery doesn’t lose half of its fully-charged power after you listen to a podcast and two songs for an hour at the gym after work.