Man Implants Magnets Into His Ears to Use as Invisible Headphones

Listen, this is cool and all, but it's also a little creepy. Mostly cool. 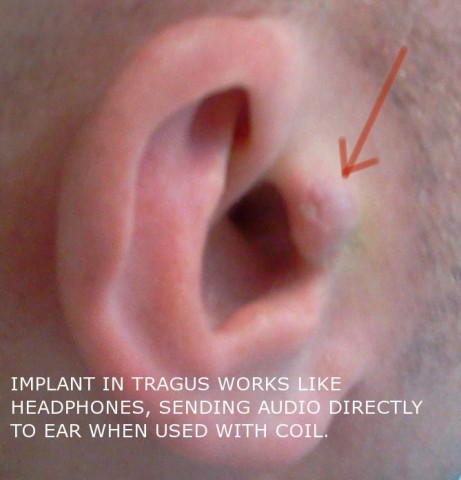 Have you ever seen that Instructables article that teaches you how to make your own invisible headphones using magnets and a coil necklace with attached amplifier? Rich Lee, a self-described “grinder” who dabbles in body modification, decided to take the idea one step further and surgically implant those magnets into both of his ears. Now he wants to see just what he can do with this new set-up, which I guess is pretty awesome. It’s also making the part of me that’s really creeped out by the Borg, Cybermen, and similar biologic robot monsters kind of concerned, but we’re still a long way from that…right? Right.

Lee considers himself to be a transhumanist, which is a movement dedicated to exploring and transforming the human condition by using technological innovation to overcome human limitation. He’s also becoming legally blind and thinks that this kind of technology would be incredibly useful for unobtrusively navigating around via echolocation or audible GPS coordinates. But of course, he’s not going to stop there:

I can see myself using it with the gps on my smartphone to navigate city streets on foot. I plan to hook it up to a directional mic of some sort (possibly disguised as a shirt button or something) so I can hear conversations across a room. Having a mic hooked up to it and routed through my phone would be handy. You could use a simple voice stress analysis app to detect when people might be lying to you. Not to say that is a hard science, but I’m sure it could come in handy at the poker table or to pre-screen business clients. […] Beyond that, I’d love to hook a geiger counter up to it and experience the world or radiation.

He also explained to us via email that he’s got a magnet surgically implanted into his finger as well. When he uses that finger to plug one of his ears, the magnet in his tragus can pick up the sound coming out of his finger. He described this as “kind of cool,” which is the understatement of the century.

When asked about the legality of surreptitiously overhearing conversations with this device, Lee responded, “I live in the US where apparently it is legal for things like PRISM to exist, so I just kind of figured there is probably a loophole in the law for this sort of thing somewhere.” Ouch.

This is all incredibly fascinating and I’m excited to see where Lee’s experimentations go. That being said, it still kinda squicks me out a little bit. Not that I can place a finger on why, but it makes me feel really uneasy in the same way that Google Glass makes me feel uneasy. Oh, and the Borg, of course. I bet transhumanists get that comparison a lot.