“You Don’t Get to Tell Other People What Racism Is!”: Sean Spicer’s April Ryan Comment Has Sparked a Heated Debate 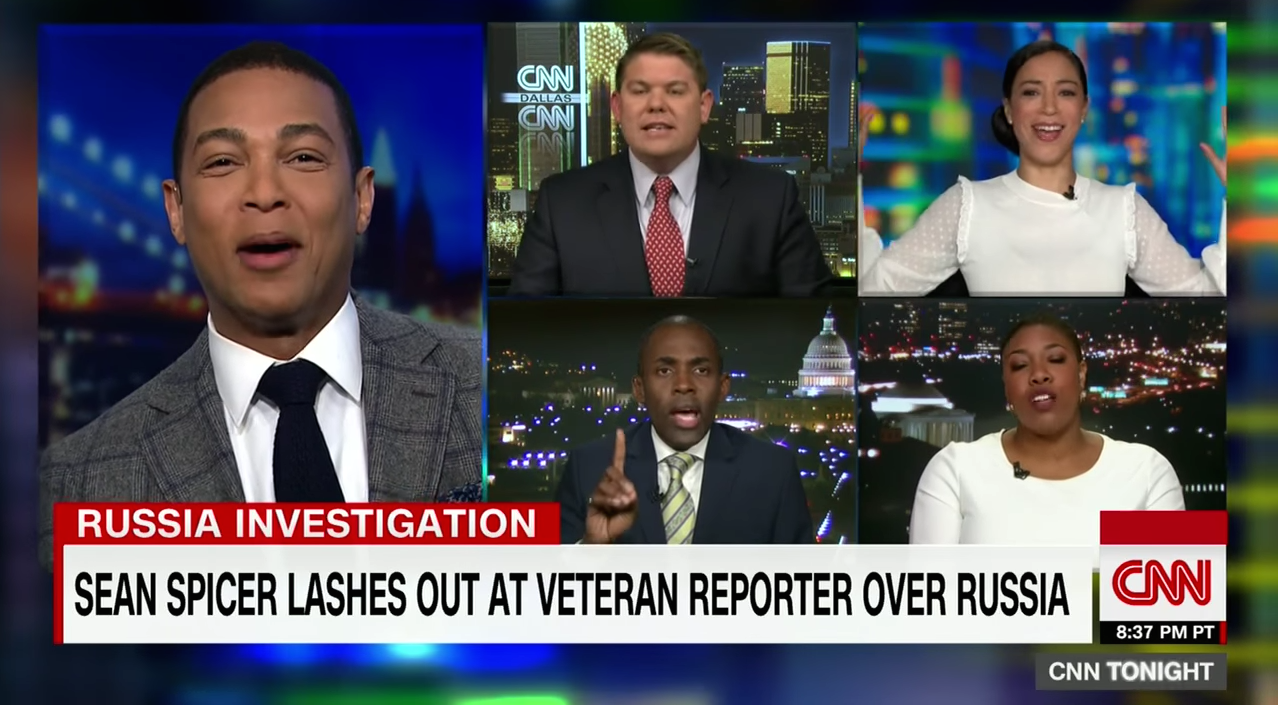 We wrote yesterday about journalistic powerhouse April Ryan and the condescending treatment she received from Sean Spicer during Tuesday’s White House press briefing. She wasn’t the only black woman to come be targeted by a while man’s patronizing bluster yesterday. During Tuesday’s episode of Fox & Friends, Bill O’Reilly said he couldn’t pay attention to Senator Maxine Waters’ speech on the patriotism inherent in taking a critical eye to Trump because he was distracted by her “James Brown wig.”

.@MaxineWaters on Bill O’Reilly comments: “I am a strong black woman and I cannot be intimidated” #inners https://t.co/B1vRE4nelt

As has April Ryan. She also got the first question in today’s briefing, with an exchange that was either hilarious or very uncomfortable, I still can’t decide.

Hillary Clinton also talked about both women in a speech at the Professional BusinessWomen of California Conference.

While O’Reilly’s comment was very clearly based in racism and sexism (he has since called it “dumb,” which is a step in the right direction, I guess), there’s a debate happening over Spicer’s treatment of Ryan.

Spicer himself said that Ryan can “take it,” and that it’s “demeaning” to her to say otherwise.

Man telling woman to “take it” is definitely good optics and would never backfire at all! Good work, Spicey. https://t.co/tgR4kJEoUZ

Says the man who couldn’t take a woman shaking her head https://t.co/s1mXK8AKpq

Similarly, there are plenty of people pointing out that Sean Spicer is a dismissive a-hole to everybody, and treats all members of the press with equal condescension. But for everyone else, it’s hard to look at the way Spicer talked to Ryan as if she were his petulant child and not see something different there.

Oh, and wouldn’t you know it, the people who see their exchange as having nothing to do with race or gender appear to be the people who would never have had the opportunity to experience systematic racism or sexism.

On CNN Tonight, Don Lemon and a group of panelists discussed the idea, with Symone Sanders saying that “April Ryan’s only crime today, if you will, was being a black woman at work and Sean Spicer could not handle that.” The two male panelists rolled their eyes with a dismissive “Oh, please” from one and “Stop” from the other. Angela Rye jumped in to agree, saying “You guys are delusional if you don’t think that’s a problem … They have an issue. Their agenda is with April Ryan, the fact that she is a credible, notable journalist in the black community.”

Conservative gasbag and generally unpleasant person Ben Ferguson interrupted Rye (and then told her he wasn’t finished when she tried to reclaim the conversation) to tell her this has nothing to do with gender and race, and that the press should be glad they “have a White House that is willing to have a back-and-forth with people that disagree with him.” At that point, the laughter was so loud Lemon had to cut to commercial.

Meanwhile, over on MSNBC, Chris Jansing brought on Jason Johnson (who is black) and Matt Schlapp (who is white) to discuss the role of race in Spicer and Ryan’s exchange. Johnson, responding to Spicer’s claim that there was no racial motivation, said “I don’t believe him. I think it was offensive. I think it was inappropriate. I think it was racist. I think it was sexist.”

Schlapp responded that the exchange got “feisty,” but that there’s no difference in how Spicer talked to Ryan and how he talks to any other member of the press. Unequivocally, according to him, “This is not racism.”

Johnson then turned to him and said, “You don’t get to tell other people what racism is.”

Schlapp responded “Neither do you,” with Johnson pointing out, “You don’t experience it.”

At that point, the two began yelling at each other, despite sitting so closely their faces only looked to be about a foot and a half apart. I’m not sure these two would have quieted down for anyone, but the image of watching them scream over the female host is an upsetting one.

Matt Schlapp: “This is not racism”@DrJasonJohnson: “You don’t get to tell other people what racism is…you don’t experience it” pic.twitter.com/WDp8miDtBs

That point of Johnson’s, that “you don’t experience it,” is too often dismissed as irrelevant by those looking to shut down the opinions of those who have experienced whatever issue they’re discussing. To those with the privilege to not have to live as a marginalized human, every moment, every instance of injustice or prejudice, can look like its own individual event, unlinked to any other. Sean Spicer didn’t make a racist or misogynistic comment about April Ryan, but that does not mean that Schlapp or Ferguson or Spicer himself, who probably had no idea the form his unconscious biases were taking, knows what it’s like to live though these moments one after another. Just because Spicer didn’t declare “I’m talking to you like this because of your gender and race” in no way means those factors don’t inform the way he speaks to a black woman.

For most, the drops of prejudice inconsequential, and the sea they make up is completely invisible. The very least these people can do is listen when they’re being told of a different life experience, and not indulge in the audacity of declaring that experience, of which they have no firsthand knowledge, unequivocally untrue.