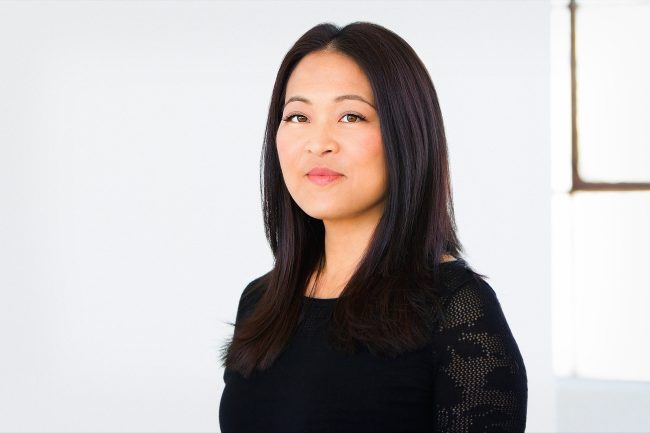 Ken Jeong’s (Community, The Hangover) ABC sitcom, the semi-autobiographical Dr. Ken, is currently in its second season, with viewers loving the humor and the Asian representation (we can’t put it all on Fresh Off the Boat, you guys). Jeong’s co-star, Suzy Nakamura, plays his wife Allison, a doctor in her own right. I had the chance to chat with the seasoned comedic powerhouse about her role, as well as the perks and pitfalls of being an Asian woman in comedy.

Nakamura has had a long, successful career in comedy already, having appeared in over 100 episodes of television on shows like Curb Your Enthusiasm, Veep, and How I Met Your Mother, and in films like Horrible Bosses 2, American Zombie, and Jill Soloway’s Afternoon Delight. After five years as a member of Chicago’s famed Second City improv theater (not to mention several others), Nakamura first had Jeong enter her orbit on a sketch comedy show, back when he was still a practicing doctor.

“And he said, Yeah, I’m still doing medicine, but I’m trying to do this on the side,” she says. “And I remember thinking that sounds crazy…I don’t know how he can make this work. Then we got cast as husband and wife in a Judd Apatow film called Funny People. Ken told me later that, after we shot that day, that he thought I want Suzy Nakamura to play my wife in something. So, when he was developing this pilot, he kept me in mind to play his wife.”

However, Nakamura still had to audition like everyone else. “When your friend or acquaintance has you as a favorite, it doesn’t guarantee you,” she explains. “You still just have to audition for it, and other people need to think you’re right as well. So, I’m really glad it worked out.”

Her role as Allison Park is based loosely on Jeong’s real-life wife, Tran, who is herself a doctor in real life, who worked with Jeong at Kaiser Permanente back when Jeong was still a practicing physician.  So, they made Allison a working mom, a psychiatrist rather than a physician, which is great in theory. However, in Season One of Dr. Ken, it wasn’t as well-executed as it could’ve been in practice.

Nakamura reveals, “The first season I thought For someone who’s a doctor and has a private practice, she sure spends a lot of time in the kitchen preparing meals for the kids! [laughs] And so, I was pleasantly surprised, they had Allison leave her private practice and come work with Ken in the HMO, and you get to see her. She’s a doctor. She’s a professional woman, and you get to see her in a work environment. Comically, that’s great, too, because I get to interact with all of the cast. It’s a wonderful set-up. I love the changes.”

She speaks highly of her “comedy legend” co-stars, like Tisha Campbell-Martin and Dave Foley, and she loves that the show depicts both a home family and a work family, showing the support that is possible in both.

Having heard so many horror stories from female comic friends of mine about what’s it’s like for women in comedy right now, I asked Nakamura about the changes she’s noticed in comedy throughout her career, and whether or not it’s gotten better, or worse.

She cannot say enough good things about Second City, saying that the theater has always been very inclusive, prioritizing inclusivity and being really active about seeking out diverse talent. However, comedy as a whole was definitely a mostly-white, mostly-male environment when she was coming up.

“When I was a part of Second City,” she says. “And it wasn’t just Second City, the Annoyance Theater was big in Chicago, and iO. Back then, in the early to mid 90s, it was an accepted reality that comedy was a boys’ club. And it had been since the beginning of comedy. And you only had small pockets of stand up or…that’s really it. Or you had character actors who ended up on SNL, And I remember constantly fighting against that. But, it’s almost like you have to be a minority to have a unique voice, you know? The problem was that they didn’t consider us comedians. They considered us Female Comedians.”

When she left Second City, and started pursuing acting work, she made sure that her agent submit her for roles written for men, because those were the actually funny roles (whereas the female roles were always the killjoy foils for the male protagonists and their fun). “There’s enough against me as an ethnic minority, and as a female in comedy,” Nakamura says. “But I want to make sure that I’m not limiting myself.”

“Since then, I feel like we’ve come leaps and bounds,” she continues. “But I don’t know that we’ll shake the idea that there are People in Comedy, and then there are Women in Comedy. We’ve even gone backwards in a way. I mean, Carol Burnett. That wasn’t considered a ‘lady version’ of a funny show. It was an unbelievably funny show. I don’t think Gilda Radner was considered she’s funny for a girl. But I think because we shouted so loud to be heard, that we then got labeled the ‘female version’ of something that already existed. You can’t help but look at Broad City and go this is a female version of a funny show. It’s a female Key & Peele.

Where she sees hope is in the numbers. Nakamura believes that once entertainment gets closer to the actual population numbers in the country, only then will we be able to take the descriptive labels off words like “comedian,” or “doctor.”

She also believes that improv theaters need to work toward gender parity for their teams: 50/50, rather than the usual all-female/four dudes and one woman models they usually work with. However, even though all art should be reflective of the world, improv tends to reflect its audience, which is usually male and white, because it’s usually audience members who go to a show, love it, and sign up for improv classes. So, it seems that audience outreach, in addition to talent outreach, is important.

“That’s what happens when you’re a show about a minority,” Nakamura says. “[Dr. Ken isn’t] a show about a doctor who has a family and goes to work. Because there aren’t any Asians on TV, or there aren’t a lot, then it becomes, at least in people’s minds, That’s the show about the Asian Doctor. But I think it’s just a matter of time.”

Thankfully, we have trailblazing talents like Suzy Nakamura leading the way and holding it down until then.