The all-ages friendly comic is in stores today! 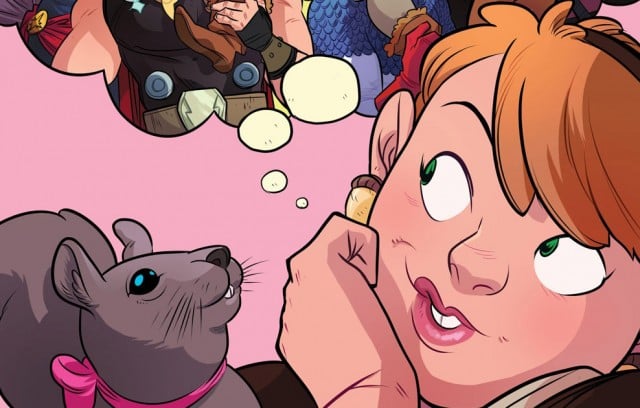 When Squirrel Girl, aka Doreen Green, first appeared it was 1991 and she was a fourteen-year-old mutant living in LA. Donning a squirrel suit she tried to impress Iron Man, her favorite hero, and failed badly. Then Dr. Doom attacked and she ended up saving Iron Man’s life fighting alongside Monkey Joe, her first squirrel sidekick, surprising both Iron Man and Dr. Doom in the process. After appearing again in 1992, Squirrel Girl promptly vanished for about decade but gained a cult following in those lost years. She reappeared again in 2005, this time in New York and alongside the Great Lakes Avengers.

The GLA is a mostly comical group that has changed its name repeatedly, it was formerly known as the Great Lakes X-Men but now they’re the Great Lakes Champions. It was while fighting Leather Boy alongside the GLA that Monkey Joe was killed [Editor’s Note: No!!!]. Squirrel Girl befriended the only surviving squirrel from that battle and named her Tippy-Toe.

Doreen impressed SHIELD so much she was offered a position as an Agent but refused so she could be on superhero team instead. Squirrel Girl later left the GLC as they were letting her do all the fighting and she thought she was holding them back. She went on to defeat some of the heaviest hitters in the Marvel Universe on her own, earning her the new honorific “unbeatable.”

It’s 2015, and at long last, Squirrel Girl has her own comic book dedicated to her adventures with Tippy-Toe. The book, in stores and available digitally today, is being written by Ryan North (Adventure Time, Original Sins) with art by Erica Henderson (Bravest Warriors, Subatomic Party Girls). Just before the launch of the The Unbeatable Squirrel Girl, I email interviewed the dinosaur-loving (purely platonic) North for The Mary Sue.

The Mary Sue (TMS): You have some pretty big bucked teeth to fill taking on The Unbeatable Squirrel Girl, it’s the first comic I’ve digitally subscribed to so far in advance of launch. What made you want to pick this character and series to write for?

Ryan North: It’s funny: I was asked by Wil Moss (my editor) to give him a pitch for a Squirrel Girl book, and it was on a Friday, I think. I spent the weekend reading every comic where Squirrel Girl appeared and thinking about Squirrel Girl all the time, and by Monday I knew two things: that I wanted there to be a Squirrel Girl comic and that I really wanted to be the person writing it. There’s a few things that make her great, but what appealed to me was how she really was this silver-age character in the modern age: she’s down with having super powers, she thinks they’re awesome, and she’s ready to fight crime with them! NO SWEAT. I loved that. And it was great that she’s been around since the early 90s, so lots of people know OF her, even if it is as just the punchline to a joke.

Anyway, I pitched the kind of book I wanted to write, and happily it was also the kind of book they wanted to see written! It’s great when things work out like that: we’re all totally on the same page, and it’s been a terrific process.

TMS: Looking at issue one the art style is modern, nutty, adorable, and over the top, a bit like Ms. Marvel’s can be. Did you get input into the art style or did Erica Henderson run with it?

North: She ran with it! There’s a sketch she did early on – it’s of Squirrel Girl leaping on a green background – that was just supposed to be a “hey, here’s a costume idea we could run with.” I loved it. I kept that image up on one monitor as I wrote the first issue, looking to it and thinking “would THAT character do this, say that?”. So her art actually informed the comic a lot, and I found it really helpful in nailing down who Doreen Green is! 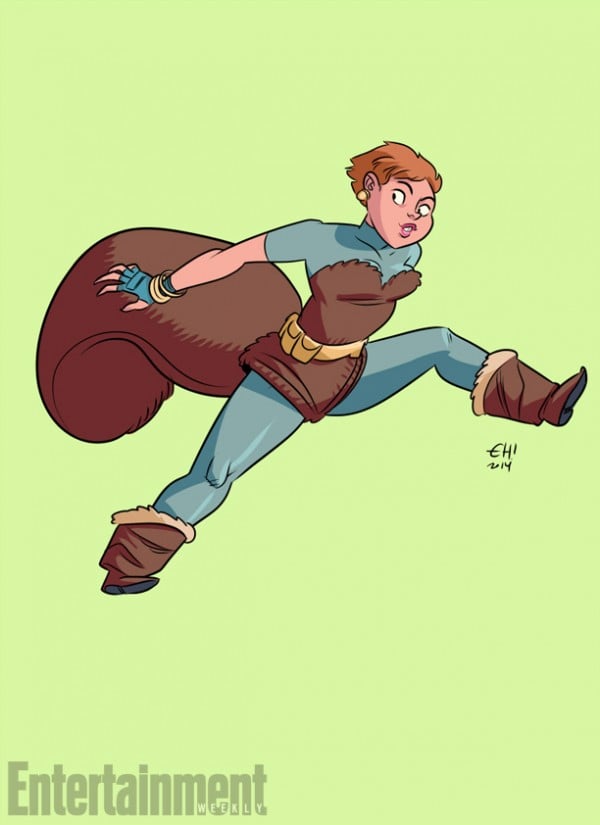 TMS: How much freedom did you and Erica have in developing Squirrel Girl’s first solo run?

North: I don’t know – limitless? Or maybe there really were all these rules and we just didn’t break any of them so I don’t know about them. But nobody’s said “no,” nobody’s said “wait, are you sure you want to do this, maybe it’s TOO awesome.” They’ve basically given us free reign to go – I was going to say “nuts” but let’s say “crazy.” DID YOU KNOW: you really find out how often you use the word “nuts” when you write a book like Unbeatable Squirrel Girl??

[Marcy Note: I found this out when I was writing these questions. I had to keep removing awful squirrel puns as they were sending the article into a tail spin. Couldn’t resist.]

TMS: Who is your target audience for The Unbeatable Squirrel Girl, and if you had to pick a comparable current series which would that be?

North: I’ve said before that I’m writing for “all ages,” and how that DOESN’T mean “writing for kids.” All ages for me is just that: everyone. You don’t write down, you know? So I just write as I’d write for anyone, and make sure everyone keeps their clothes on and nobody swears. That’s it, that’s the only change! So SPOILER ALERT: Squirrel Girl will not get naked and swear at you in this new comic. OH WELL?? [Editor’s Note: You have Deadpool for that, anyway.]

For comparable series, I’d pick comics like Ms. Marvel and the new Batgirl comics: I think we’re all trying to do some new, intriguing, unexpected things there.

TMS: When Doreen Green first donned the Squirrel Girl costume she was just fourteen and a very different fuzzball from today. She seems to be around eighteen now (and over both Speedball and Wolverine) so will we be seeing a new romantic interest for her? After all who could resist lips that taste like hazelnuts!

North: She’s starting up at university, and that’s a time of meeting a lot of new people and maybe kissing some of those, so – maybe! MAYBE.

It’s funny: that “lips taste like hazelnuts” thing is actually the one thing I’m trying to retrocon (sic) in the new series. It just strikes me as such a sexualized thing to attach to the character. Like, do Spider-Man’s lips taste like insects? We don’t know, because nobody cares. I think there’s a lot more really interesting things to talk about when you talk about Squirrel Girl than what this woman’s lips taste like.

TMS: Freed from her duties as nanny, will the college bound Squirrel Girl be more action oriented, taking names and kicking butts? Or will we be seeing more of a coming of age story?

North: Why not both, right? I want to see someone kick butts while also learning more about what it means to be alive. That way, I as a reader can better understand the people around me, while at the same time better understand ways in which a squirrel-powered woman might ALSO kick their butts. 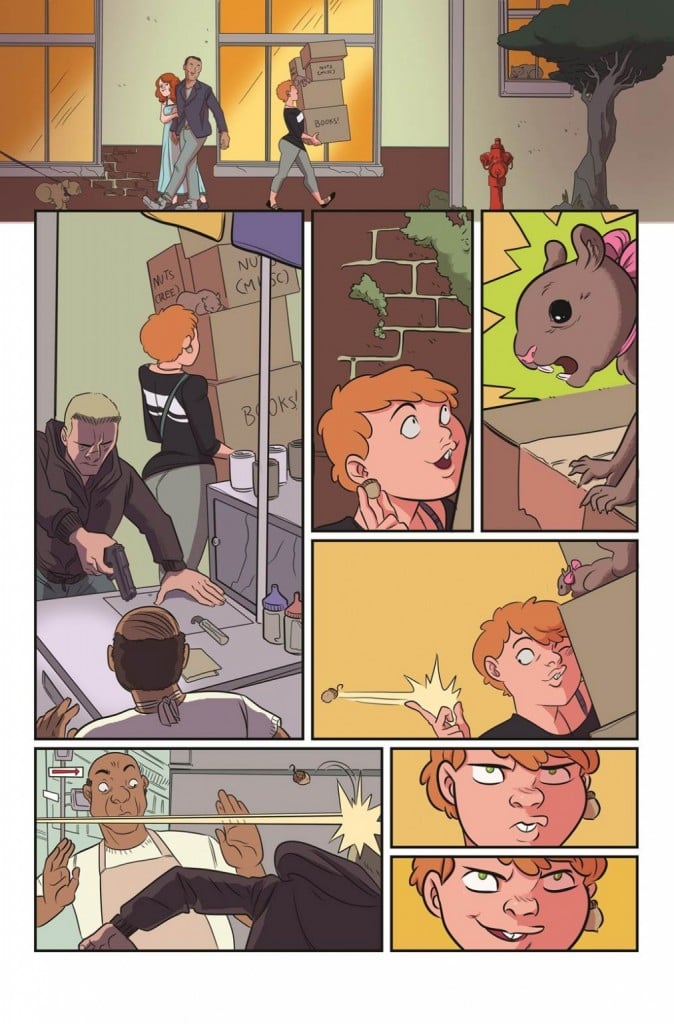 TMS: Having appeared most with The New Avengers and with Iron Man, as her original hero and inspiration, do you think we’ll see some big name crossovers as the comic progresses? And if you could pick an appearance from anyone in the MU who would you go for? Personally I want more Deadpool being utterly terrified of her.

North: Besides my short Young Avengers story for Original Sins, this is my first time writing in a shared space like the Marvel 616 universe, so absolutely I want to exploit that and have as much fun in that sandbox as possible. But it’s also Doreen’s story, so Spider-Man isn’t going to show up for no reason just because I want to see the two of them fight. Besides, I don’t want to see Squirrel Girl fight Spider-Man, I want to see her fight GALACTUS.

Which, incidentally, she is absolutely going to do by issue 4.

TMS: One of the critiques I’ve heard about Doreen Green’s character is that she’s a ‘one trick squirrel’ and only used to defeat seemingly undefeatable foes with her fuzzy army of DOOM. The list includes big hitters like (deep breath) Doctor Doom, Mandarin, Giganto, MODOK, Thanos, Terrax, Bug-Eyed Voice, Bi-Beast, Deadpool, Fin Fang Foom, Baron Mordo, Korvac, Ego the Living Planet and Wolverine. Personally I hope we still see some of that but how do you intend to make Squirrel Girl a more rounded character?

North: Haha, yeah, she’s a super hero! She’s OBVIOUSLY not going to lose all the time. But when people take that and say “oh she’s a one-trick squirrel” (great phrase, by the way!) it sort of makes you think – wait, how so? Spider-Man doesn’t go along losing all the time. We don’t go see Avengers movies to watch them lose again and again and again. Super heroes win because they’re really good (“super,” if you will) heroes, and that’s what Doreen is! So I don’t see the fact that she’s really awesome at beating up bad guys to be any sort of limitation on her character.

That said, yeah, you’ll see her taking down big hitters while also doing lots of other things, and I’m looking forward to exploring her universe a lot more. We’ll meet her new roommate in the first issue, and soon there’ll be some other characters that will have a pretty big influence on her down the road!

The Unbeatable Squirrel Girl harkens back to the yesteryear of comics, it’s all a bit silly and tongue in cheek and good fun. I believe some comics can have a universal appropriate age, like a Pixar movie, not everything has to be gritty and brooding. Both my daughter and I really enjoyed The Unbeatable Squirrel Girl #1 just as we both enjoy Ms. Marvel. From what I’ve seen so far this comic is in the right hands. Oh, and I have my own theory of why anyone in the MU could be defeated by Squirrel Girl – her power is the ability to triumph over evil. Hulk hug fluffy-wuffy squirrels.

I want to thank Ryan, who just agreed to be randomly interviewed by some crazy woman. You are amazing. I also want to thank Marvel’s Ryan Penagos who helped get the ball rolling and Chris D’Lando for working with me to get this finished quickly! You’re all very kind.

Now I just want “one trick squirrel” to appear in the comic because I’d just melt.