"Feeling like a bad ass is the side dish, and fucking shit up is the main course."

I received a text in the middle of the night from my best friend, and the bubble popped up with “Whenever I’m with you, I feel like a bad ass.” I thought about this for a second, and I replied, “Guuurl… same goes for you.” There is no other feeling like a loyal camaraderie that is capable of lifting up a spirit from days that are too wearisome and tedious, or days that flat out suck. I hold onto feeling infinite and indestructible the times I do hang out with my best friend, because who wouldn’t want to feel like a bad ass? 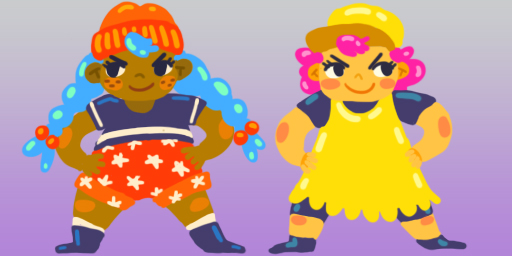 A game by Jane Friedhoff and art by Jenny Jiao Hsia, Slam City Oracles emanates that same vibe, except in this game, feeling like a bad ass is the side dish and fucking shit up is the main course. Slam City Oracles or SCO is a multiplayer cooperative game, where two teen girls join forces together to smash, break, and pound against the gravity that is holding them down.

The game mechanic is frantic, almost similar to middle-school field trips to theme parks, riding rollercoasters along to the shrill of hysterical cries and laughs. Likewise, the physics in SCO unavoidably stirs the heart giddy, and maybe the mind a little woozy. Roger Caillois was a French sociologist interested in games and play, and developer Jane Friedhoff has taken away his idea of ilinx, “which is a kind of play that’s all about disorientation and the pursuit of vertigo.” Remember that feeling of riding a merry-go-round and pleading for it to stop—the stomach squelches and gurgles—that’s ilinx.

It comes as no surprise then that the mechanics of Slam City Oracles may slightly befuddle the player since moving around is limitless. There are times when the player character looks like she’s flying, gliding, or jumping. Once the character hits the air, a sense of panic takes over because for a few seconds the motion is uncontrollable. This frenzied sensation is confined within a digital space and players can ironically control the cause of their disorientation by staying stationary, which I find fascinating because these players could be sitting down or standing up in a fixed position, and they could still experience the same effects of ilinx as they would if they were physically spinning or being moved around. 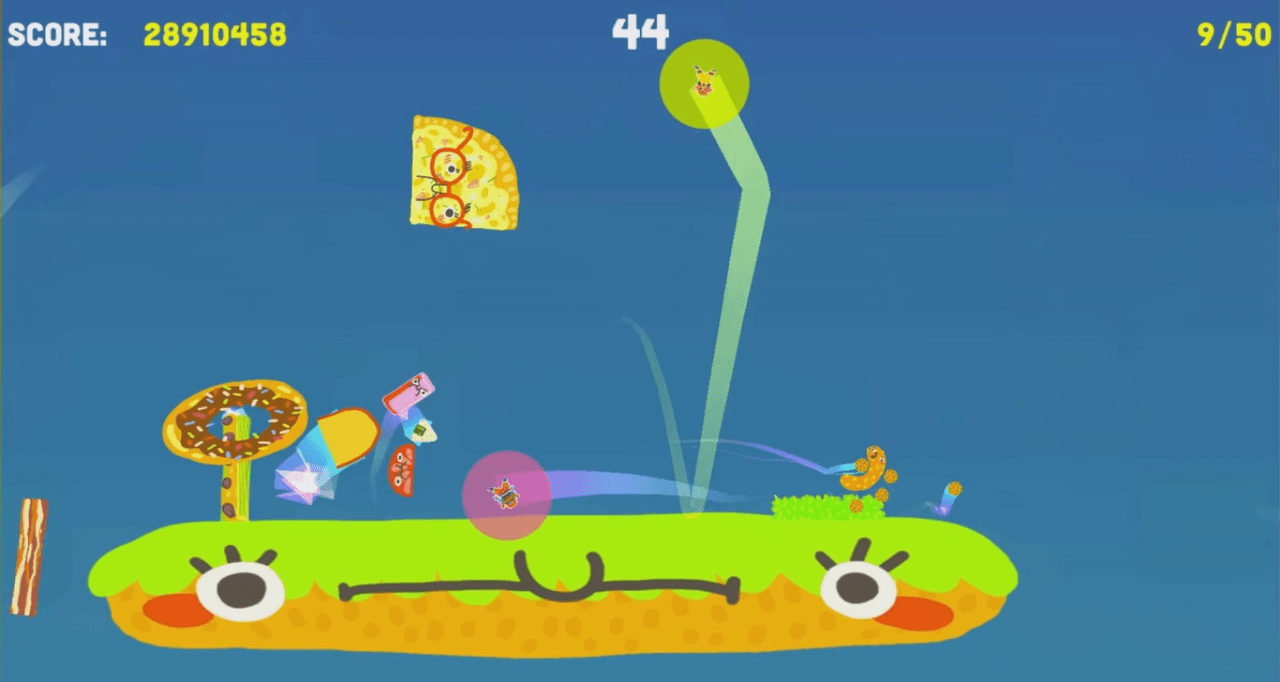 Slam City Oracles also has multiplayer mode. This means double the exhilaration, and I can share the effects of ilinx with someone. I wondered though, why is it cooperative instead of competitive? Wouldn’t competition make it even more electrifying, especially when both players are fighting to accrue the most points during those last seconds? Jane simply puts it this way: “One reason is practical: in a game that’s about creating a domino effect of things toppling each other over, it’s really hard to decide who triggered what!” There’s certainly enough ilinx in the game and making it a one-versus-one style would overkill the game’s mechanic, diluting the effect of its “exploratory, silly, and performative” environment. A party game like Slam City Oracles emphasizes bonding with people, and I’m pretty sure trash talking is not a product Slam City Oracles wants to promote which happens frequently in competitive gaming.

Sources of inspiration for Jane are Luftrausers and ROCKETSROCKETSROCKETS which utilized Caillois’s ilinx as well. Stimulating a “wonderfully dizzying feeling” where Jane herself could feel the blood rushing to her head or her stomach tightening up. The main mechanics of both games became a spur for Slam City Oracle’s wild and reckless bounciness: “I remember walking down a city street and replaying these moments in my head: the acceleration upward, the pause at the top of the arc, and the intensity of zooming all the way back down, over and over again. I couldn’t stop thinking about it, which seemed like a good sign I needed to use it as a game mechanic.” 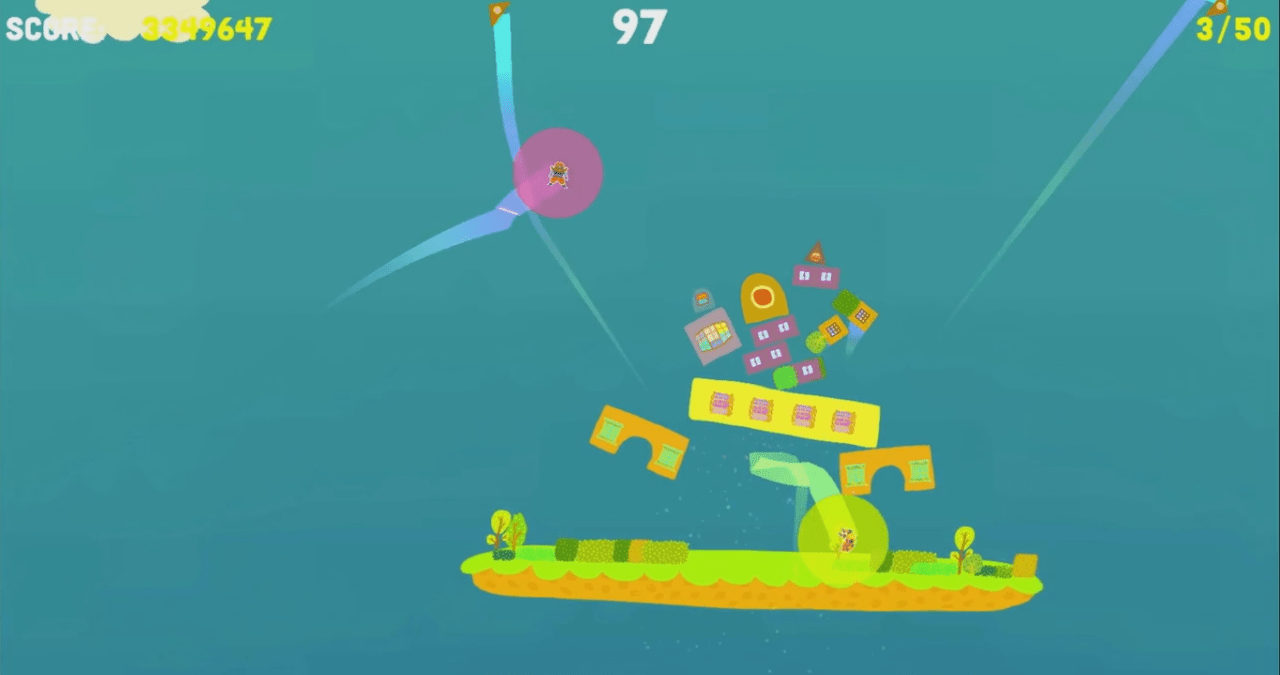 The erratic and clumsy movements contrived from the playable characters also act as a social commentary on women’s’ bodies, especially during the teen years, where obsessing over a zit or the fluctuating numbers displayed on a scale could negatively disturb a girl’s self-assurance and self-identity. The need to be skinny is drawn out, spreading beyond the physical body and into the mind, which consumes the self over all. I agree with Jane that, as women, “we’re socialized to be very self-conscious. We’re told to be less loud, less opinionated, and take up less space.” Slam City Oracles breaks these societal constructs that have endlessly suppressed the space for women to grow and feel comfortable.

During high school, I picked tennis over field hockey. The sight of an open field and hearing the ball crack against the receiving end of the stick was invigorating. I was always designated the position of midfield, and I liked it that way because running back and forth between forward and defense was liberating—I was taking up space. Though we wore skirts, our legs were bruised up and we smelled of sun and dirt. Slam City Oracles reflects this experience of mine, and I hope more games are created with the purpose of freeing women from unhealthy body image and public expectations.

However, there’s still a line-up of games that confine women’s bodies to fit the heteronormative male gaze, along with specifying them as subsidiary company to the male protagonist; and still, some women characters are manufactured to be as disposable as food items or knick-knacks. Even outside of this video game fantasy, women who are involved in developing games are harassed in reality. The games community last year was in shambles, and several women game developers were attacked merely because they had a voice—for being too loud, for taking up space, and for being themselves. Jane Friedhoff herself also had her own struggles when she was developing SCO: “I was developing it during a period of time where I felt lonely: both due to the socialized fears I described above (taking up too much space, being too loud, etc.), as well as due to the stresses of being a woman in game [development], who was at the time helping run a women in games initiative. SCO became a bit of an escape from that. Those feelings definitely influenced the creation of a game where the women are invincible, where the women take up space and shake up the world.”

Slam City Oracles is “a lover letter to other women in games.” To those women who feel out of place because their games challenge the standard, and to women overall who are constantly battling their own fights, this game is for you. 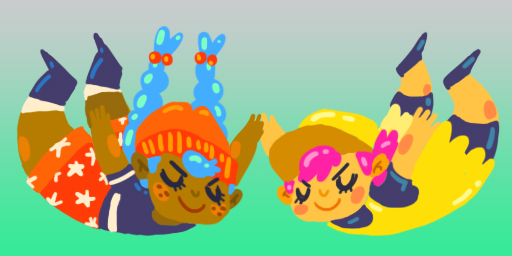 At last, I asked Jane what is the message she wants to resonate with people playing Slam City Oracles. Her response was on point:

There’s still a subversion of the typical messages we get about women’s bodies, done entirely through the game mechanics. You get points for knocking things over, which are all about taking up space. The characters are stocky because that’s critical to their ability to slam things and get the highest score. You work together, rather than trying to compete with each other for no reason. These are subtle things–they’re not didactic, there’s no intro text talking about how important these values are–but these little built-in messages still feel important to me.

Not everyone sees these messages, and that’s okay. I wanted to design a game so that someone totally oblivious to these experiences could enjoy it. But folks with similar experiences have come up to me and told me how much they love and identify with the game’s message–even without me telling them what it is–and we get to share this delightful playful moment of nose-thumbing together.

I really do believe in the power of play and games to reset our perspectives on ourselves and the world around us, and I don’t think we have to be didactic to do so. I try to make games that have players lower their guard, embrace silliness, and behave in unusual ways, because I think that can spark something in them that lives on after the game is over.

I completely hear you Jane, and games are capable of shaping our character the second we start playing them. Our brains rearrange based on the visual information we receive, and this can happen every minute, and I don’t mind my brain rearranging to the content of Slam City Oracles—just keep it smashin’.

Look out for Slam City Oracles this fall.