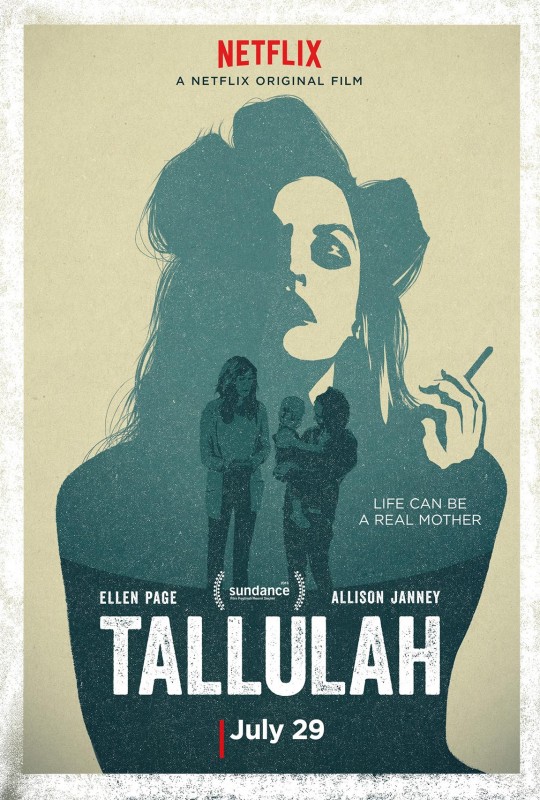 I recently got the chance to interview actress Tammy Blanchard and director Sian Heder about their work on the movie Tallulah, which is out on Netflix today. The film centers around Ellen Page’s Tallulah stealing the baby of a neglectful mother named Carolyn, who’s played by Blanchard. However, Tallulah lives out of a van and seeks out the help of Allison Janney’s Margo, the mother of her ex-boyfriend. You can watch the trailer here.

Heder and I talked about how her film evolved over time, how her own experiences as a mother influenced the story, and portrayals of mothers in Hollywood.

TMS (Charline): So Tallulah started with your short film Mother, which was inspired by an event where you were in Ellen Page’s position of seeing a neglectful mother. That was a while back and now you’re in such a different place—you’re a mother now too. How did the film change over that time?

Sian Heder: I always say I wrote the script from a very judgmental place. When I was in my 20s and working as a nanny, I just looked at a lot of these parents and felt like I could do it better than them, and I felt like some women shouldn’t be mothers at all—especially if they made that decision to have children for the wrong reasons:out of a sense of pressure from society or from their partner—and at the time I was living in a studio apartment. All my furniture was from the trash. I had no reason, but I looked at a lot of the wealthy women especially—they were always taken care of, there was a kind of neglect that I was witnessing that I felt like was just really tragic and wrong.

But then, of course, in the time it took me to put the feature together, I became a mother and it was incredibly challenging—I was always very cocky about having kids, I was always really good with kids, and everyone told me that that was something I should do. My daughter was born colic and the first few months were really hard for both my husband and I, and a lot of that judgement disappeared.

I had a lot more empathy for moms that are struggling and I rewrote the script because suddenly my villain didn’t seems like such a villain anymore. I still think an audience will judge her, but they will also find a place in their hearts to find empathy for her and that was important to me. So the script definitely evolved. It became a much more complicated, nuanced story because I found myself rooting for everyone and I wanted my audience to root for everyone—but when you have your audience rooting for all your characters, there’s no easy outcome because someone’s going to have to get hurt and someone loses when the stakes are so high.

I’m thankful, when you’re in that process as an indie film maker it’s so frustrating—trying to wrangle your money and your cast and it’s taking years. It’s just sad and frustrating, but looking back I’m so grateful that it happened when it did because of my life experience, which I think made for a more interesting story and also because I found the perfect cast and they were available at the right time. You sort of look at it and you think, “It’s exactly right the way it happened.” If I made this movie 8 years ago, it wouldn’t have been as interesting a film. 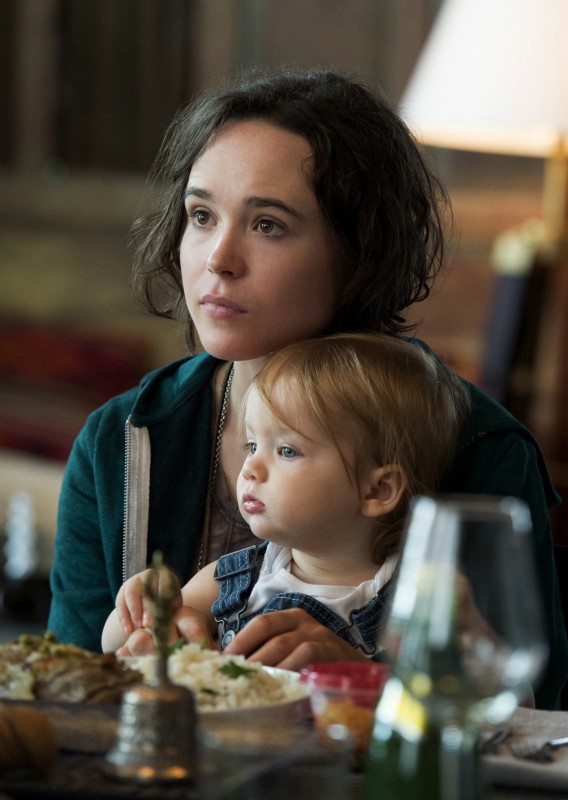 TMS: It’s definitely hard to picture anyone else inhabiting those roles. Tammy and I were talking about how much we love Carolyn as this honest and brutal single mom.

Heder: Honestly, after doing it—I have two kids because I was six months pregnant when we shot the movie, and with a 16 month old I can’t imagine how single moms do it. That was one of the things when I met Tammy, is that is I knew that her part would be the hardest to cast because on the page she can be very over-the-top, and almost a parody of a person some New Housewife of New Jersey.

Heder: Totally, she’s a Blanche Dubois. But really, I knew the key to that character was finding the vulnerability, the deep broken sadness that was underneath her and if the audience felt those two things at the same time that was going to make for a much more interesting journey. And the thing that I really related to Tammy is that when she auditioned she brought in all those qualities—she was dangerous, but I also wanted to put my arms around her and wrap her in a hug.

She felt like a toddler herself, like this very naive person who’s kind of grasping at straws. Tammy had had the experience in her life with her own child and struggling, that she connected to Carolyn and loved her. That was very important because it’s an easy character to judge and she didn’t judge her.

TMS: Another really strong part of the film is the supporting cast. There’s oftentimes a voice of reason, like, Uzo Aduba’s character really felt like the audience’s voice. It’s somewhat cathartic but also conflicted.

Heder: I think there’s moments of truth-telling in movies where, you know, the scene with Margo’s husband where he finally says all of these things that I think the audience has been thinking—I mean, Tallulah is so sketchy! And Margo on one hand is this incredibly intelligent person but she had this blind spot in her life where she wants love so badly—she did it with her husband and ignored his sexuality for years and years and she’s doing it again with Tallulah. There’s so many red flags in this situation and she’s refusing to see them.

I wanted every character to feel justified in the film, even the small characters. The husband and his boyfriend are only in there for one scene but what John Hickey and Zachary Quinto brought to it was they felt like they had a whole history together. They felt like they’re—it was complicated, there was so much love in that relationship between Margo and her ex-husband. It was such a nasty scene on one level, but it was on this bed of deep brooding history and love.

I think your supporting cast is so important because it’s almost like—the weakest link pulls the story apart. So even if you have someone who has one line and they’re a check-out person you want to believe that’s their job. Casting is just so important to me, I read everybody. I’m lucky I had relations both with Zachary Quinto and Uzo that she could come in and play that part because it’s not a huge part, but she is the voice of reason in the film. She is the audience, the grounded voice of empathy.

TMS: I was curious about the ending and what you said about a how the stakes are tough to resolve when you’re rooting for everyone. I felt like there was a purposeful ambiguity since we get the sense everyone’s changed—but we don’t see explicitly what happens.

Heder: It was important to me to start a conversation with the audience and to leave people with not resolution, but hope. You’ve seen deep-gut transformations happen for each of these three characters and you’re left feeling like that transformation is going to send them on a path that’s going to help them move forward with love and relationships and all these things they’re lacking at the beginning of this film.

So, you know, the ending changed a lot. I have a lot of drafts on my computer. At one pointI felt that especially for the character of Tallulah she’s someone who’s always run away and that’s always been her default coping mechanism.

TMS: The first time we see her, she’s running away from people.

Heder: She keeps moving and Nico says at the beginning of the movie, “There’s always something else. You want to go to India, but there’s going to be the next place and you’re never going to stop.” Ellen and I talked a lot about this person, who has a lot of pain in her past and her mechanism for dealing with that is to be on the run and her wounds are never going to catch up with her because she’s going to be moving onto the next adventure.

TMS: Yeah, Tammy and I were talking about the different turning points for the characters. 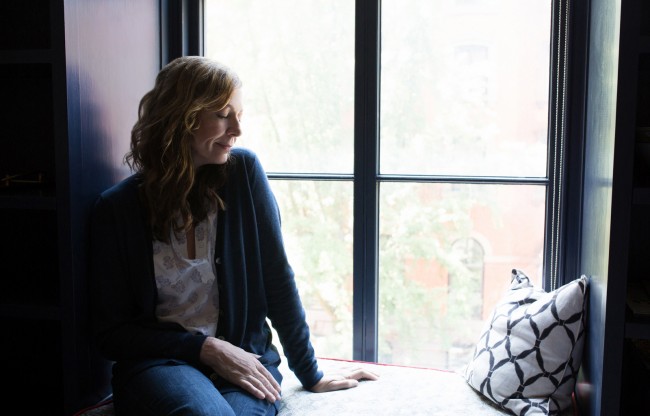 TMS: There aren’t that many movies out there that portray “bad” moms empathetically. I mean, maybe that new movie Bad Moms will be a counterpart.

Heder: I’m very curious to see it because it came from men, it’s all by men.

TMS: I think it’d be really interesting to put that next to Tallulah see how that works. Do you feel like that’s something that’s changing?

Heder: I think it’s just a deeper question about three-dimensional flawed women and the movie mom or television mom trope—a lot of it is projection. I think a lot of the shame women feel when they become mothers is that it doesn’t feel the way it looks on TV. I certainly have dealt with that as “the woman who has it all”—I made a feature and had a baby in the same year and it’s so challenging, like, going to Sundance with a 3-month-old and pumping my boobs in weird bathrooms in between press interviews.

The whole thing feels so out of control and I think when women see themselves reflected in a real way there’s such a profound feeling of relief—because so often I think there’s a disconnect between what it feels like to be a woman and what we see in movies and on TV and all that stuff.

So I hope our culture is shifting towards a more honest portrayal of women, because parenting is complicated. There’s a lot of conflicting emotions, and any parent who starts to admit to you that it doesn’t always feel good has to always preface it with this “but I love my kids and i’d never wish for anything in the world other than my kids but.” There’s this huge grief and sadness for who you used to be, and the freedom you used to have, and the fact that it’s never about you anymore—so I think there’s a kind of dishonesty in those conversations and what I hope is this film opens a more honest conversation for both men and women about what parenthood actually is.