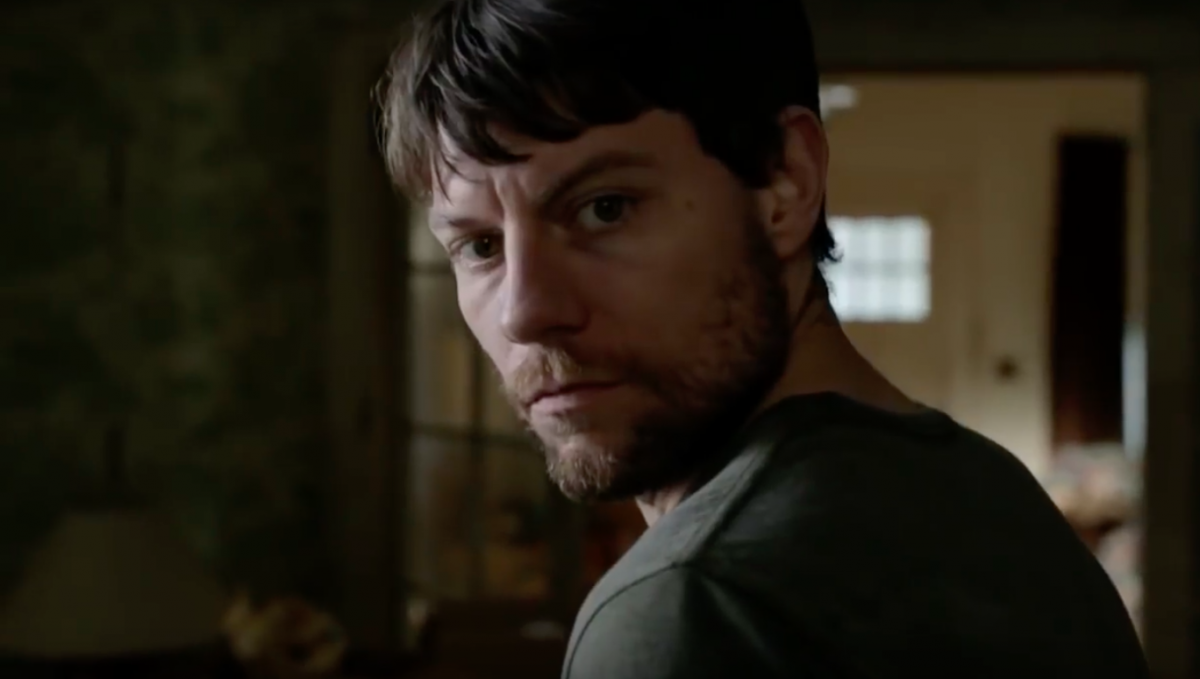 The Walking Dead isn’t the only Robert Kirkman comic with a TV show. Outcast was adapted into a ten-episode first season that aired on Cinemax back in 2016. A second season was filmed and aired in the UK in 2017, and that second season will finally be airing in the United States this summer. I had a chance at a recent Cinemax press junket to talk to the show’s star, Patrick Fugit.

Fugit plays Kyle Barnes, a man who’s been dealing with the effects of demonic possession his whole life, and is rejected by the people in his hometown of Rome, West Virginia, for allegedly hurting his wife and daughter. He teams up with the local reverend, John Anderson, to help others in Rome who are suffering possession.

“I think at the beginning of Season One, we see Kyle at sort of a self-loathing and pitying place,” Fugit says, when asked about Kyle’s state of mind going into Season Two. “He’s on what he believes is a noble mission. He’s taking on this burden of this darkness, the stigma of the wife-beater and the child-beater and that sort of thing…to protect his wife and his daughter. It’s the wrong way to do it, he finds out. He’s actively protecting his family at the end of Season One. Or, at least he’s trying to.

“In Season Two, he…Kyle is not the brightest bulb on the tree? So, it’s gonna take him a while to figure out that he’s going to be required to take on a much larger role in the scope of this war that’s going on in order to protect his family. The mission does not stop with his family. It’s going to include this much larger scope. Season Two is a lot about finding out how far that goes, and what his role is gonna be, and why.” 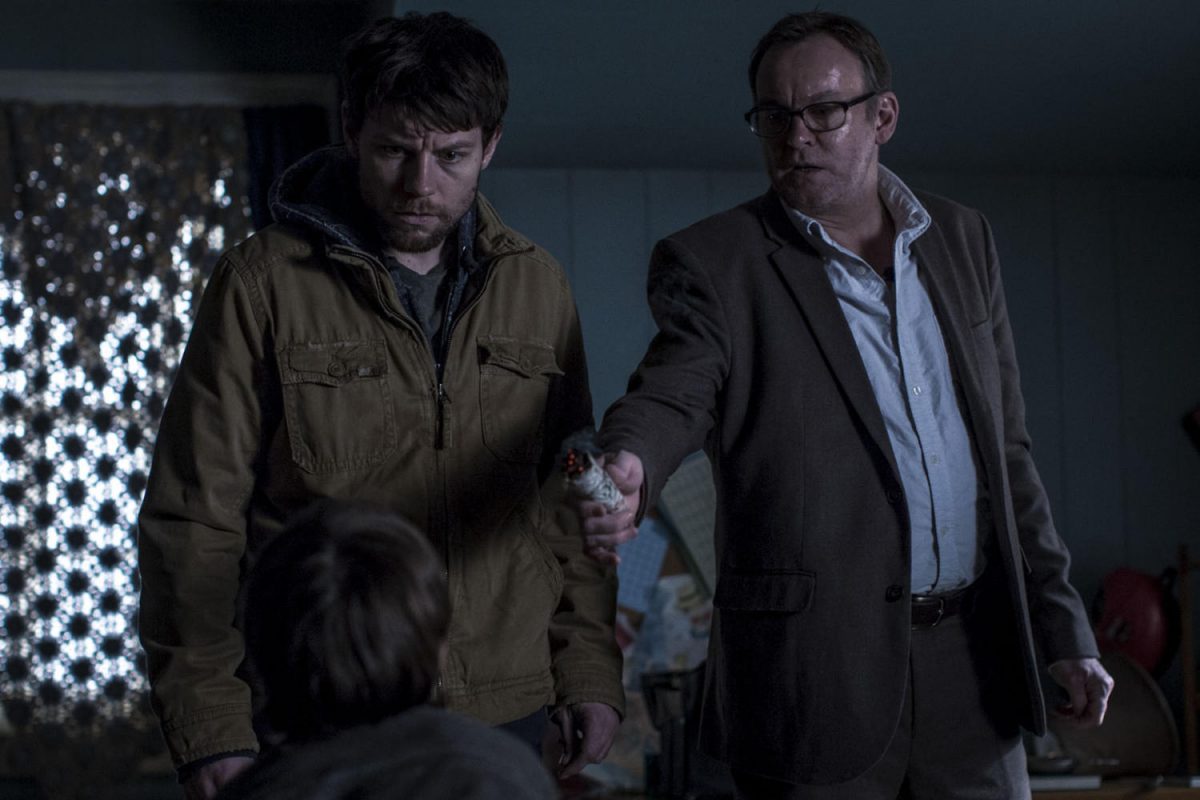 Since there’s such huge gap between seasons here in the States, I asked Fugit about the fan response in the UK, and whether or not any of that has filtered into the U.S. considering spoilers on the internet and…ahem…content traveling via less-than-legal means.

While he says he doesn’t know much about how one would go about getting a show that wasn’t available here, he does receive the UK fan response via is one concession to social media, his Instagram account. It’s been mostly positive. Then again, as he says, “If someone’s going to stop on your Instagram to say something, it’s usually gonna be something nice. So, I read it and I’m like Dang! Outcast is killin’ it! Yeah!”

Sometimes that means they’re talking excitedly about spoilers, and when he sees that, he tends to remind them that people in other parts of the world haven’t seen it yet. Fugit sees the fact that Outcast flies under the radar in the U.S. as a positive thing. “It’s like, if a spoiler comes out for Westworld or Game of Thrones,” he explains. “It obviously circulates very quickly. And Outcast—and I think of this positively—it has the pleasure of sliding around a little more low-key. So, spoilers might not affect people who are stoked to see it.”

There’s a lot of possession-related violence on Outcast, but when asked if the violence took its toll on him as an actor, Fugit seemed very philosophical about it, having trained in martial arts and “really enjoyed warrior ethos for a long time.” He says:

“Violence itself is something that I understand and am familiar enough with that scenes like that don’t bother me. In fact, I’m a bit more strict that the actual outburst of violence has to have a correct approach.

Violence for the sake of it is gratuitous and really doesn’t have a place. But understanding the story and the character and the escalation to the violence is what makes it resonate for me, and what makes it so intense. And hopefully, each time Kyle goes into one of those moments, not that we can excuse his behavior, but we can understand how he got there. And an important part of that is setting up the ability to change, the ability to refrain from that escalation. Hopefully, if he evolves enough…he learns a better method.”

What originally drew him to Outcast in the first place was “finding out that Robert was actually shifting the perspective on [the possession] genre. He’s actually using our familiarity with the genre to sort of subvert our expectations and provide a new dynamic. A new type of story. With that, you start with all the preconceptions about exorcism, and he opens it up and creates a whole new mythology.” 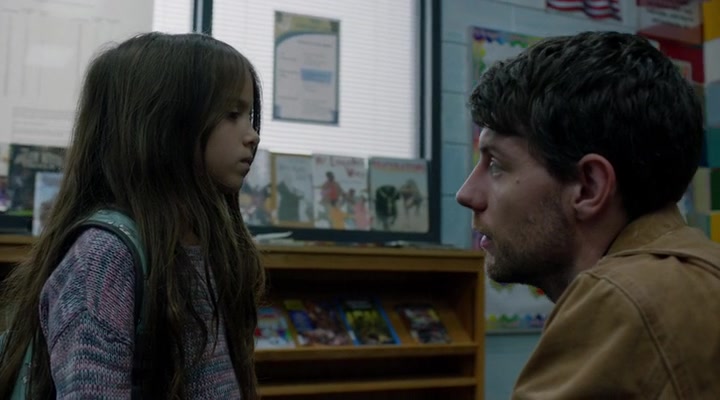 To Fugit, it’s Kyle’s dynamic with his six-year-old daughter Amber that is the most exciting one of the show. He laughs about the beginning of his work relationship with Madeleine McGraw, the young actress who plays Amber.

“On the one hand I was like, I’m her daddy,” he says. “But it’s also like a six year old girl, so I’m like, I don’t want to handle her in a funny way. Dads…it’s like smokers watching smokers and they’re like Bullshit! You don’t smoke! I didn’t want parents watching this and be like What the fuck is he doing? You don’t pat a kid on the head like that.” They have since built a really great rapport, and Fugit is friends with her and her whole family.

He continues, “At the end of Season One when I discovered as a reader that [Amber] has this power and there’ll be a change in this dynamic, I wanted the opposite of what Kyle wants. He wants to protect her. It’s his worst nightmare. I’m like She’s a fucking superhero! You can pick her up and throw her like a spear into a group of possessed people, and she can wreak havoc! I want team tactics!”

Brent Spiner also co-stars on Outcast as Sydney, a mysterious preacher. It’s in talking about him that Fugit totally lets his geek flag fly, revealing himself to be a Trekkie going way back. He speaks effervescently about getting to work with one of his childhood idols.

“I grew up watching Star Trek. It’s not the greatest thing to identify an actor with a role that they played 20 years ago…but Data. So, I grew up watching him, and he was a huge inspiration when I was young, because the other characters in Star Trek are pretty straightforward. They’re varied, but they usually make the same good decisions and that sort of thing. Data was a blank slate. They give him all these great acting challenges throughout the seasons. He has to be human enough to be relatable, but machine-like enough that you believe he’s an android. That’s a really crazy acting challenge to bring soul to a machine. I appreciated that as a kid. But also, they gave Brent so many different challenges. He got to play Noonian Soong, the guy who created Data and Lore. He got to play Lore, who was the antithesis of Data. I saw that, and I thought, that’s what you have to be able to do! So getting to work with him and play scenes with him…I tried not to nerd out on him.”

At the end of the interview, he pulls out a Data pin that Spiner brought back for him after attending a Star Trek convention, and as hardcore as Kyle might seem on Outcast, this moment of geeky pride was just too damn adorable.