Interview: Paige O'Hara on Beauty & the Beast | The Mary Sue

Interview: Paige O’Hara Talks the Role of a Lifetime and 25 Years of Beauty and the Beast

It’s hard to believe that Disney’s Beauty and the Beast is in its 25th Anniversary year. To celebrate, TMS has already given away a copy of the special edition 25th Anniversary Blu-ray of the 1991 animated classic. But the celebrating didn’t stop there. Disney not only invited TMS into the Disney Archives to check out some pieces of Beauty and the Beast history, but they also gave us the opportunity to speak with the voice of Belle herself, the multi-talented Paige O’Hara!

The images in the above gallery were either taken by me as I toured the Disney Archive, or were provided by Disney directly. In them, you’ll get a glimpse of some early character sketches and how Belle and the Beast visually evolved into the characters we know and love. 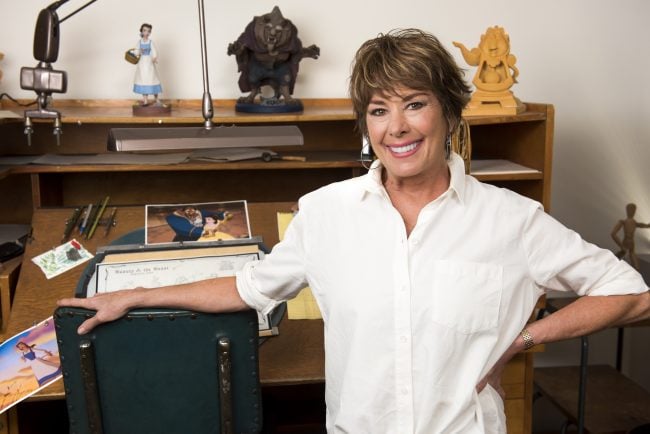 Paige O’Hara is one of the hardest-working women in entertainment. In addition to extensive voiceover work in film, she’s also a Broadway veteran, a singer, and a visual artist! I had the chance to speak with O’Hara when I attended Disney’s Beauty and the Beast 25th Anniversary press day, and she had a lot to say about playing Belle and what this role of a lifetime meant to her.

Teresa Jusino (TMS): What were you expecting from the film when you first took the job, and how did that differ from what ended up happening?

Paige O’Hara: (laughs) I just expected it to be a really good film! I had no idea until we got really into it…I recorded off and on for two years. I recorded the entire script the first day. And then they go back, and then Robbie [Benson, who played The Beast] was hired, and then they animate, and then they change the script… I knew from the script that Belle was a special character, because she was the first in so many ways.

She was the first that wasn’t looking for a man, she was looking for adventure. She was an older princess, in her twenties instead of a teenager. She was just very liberated, and very intelligent. And I just love the fact that she was the bookworm…there were all these firsts with her. I knew that Belle would be popular, I just had no concept of how popular and how big this film would be 25 years later!

TMS: Obviously, with Beauty and the Beast being the first time that an animated film was nominated for a Best Picture Oscar, it seems as though animated work has become not just more popular, but more well-respected in the film industry…

O’Hara: Oh, it’s definitely more respected! Absolutely. Because when we came out at the Academy, there were a lot of famous actors who were like, Well, that’s not really acting. Why is this up for Best Picture? And after the success of this…now you have some of the biggest stars dying to do them! Because they realize how much fun and how wonderful it is, and what a great art form it is. It’s a true art form, and it’s finally getting the respect that it should’ve gotten when Snow White came out.

TMS: And does that go for being received as a voice actor as well?

O’Hara: Oh, we’re totally more well-received now. It’s very interesting. I really think that the fact that it was nominated for the best film…the critics really, the way they reviewed this film put us at another level. And then it winning the Golden Globe, you know? Then Lion King surpassed it in terms of numbers. But I think over the period of time, partly because of the score, very much because of the score, I think it’s timeless. I think they’re the Rogers and Hammerstein of this era, and I think they’re going to be like Rogers and Hammerstein fifty years, a hundred years [from now], this music will live on. And the story will certainly live on. It’s a timeless message.

O’Hara: Well, they’ll identify with different ones…Belle was the first to get a lot, certainly according to the mail I got, a lot of kids that were feeling odd and out of place like she was. Bookworms, or if they aren’t the ‘typical looking’ person, or different in some way. And they felt that they had someone that they could finally identify with. It was very smart. Initially, in the drawings of Belle, she looked like Angelina Jolie perfect. But I think for this character, it was smart to make her…she’s very, very pretty. She’s beautiful. But she’s quirky, and she’s more identifiable. They matched the look to go with the soul of the character. And she’s not the normal person, or a normal princess. She lives in a small town, her father’s an inventor. She becomes a princess, she’s not born from royalty.

TMS: I love that, not only is she quirky herself, but she’s drawn to the strangeness in others. She finds beauty in the beast…

O’Hara: And she’s smart enough to see right through Gaston. She sees right through him from Day One. And being much older now, I’ve said this to people recently, I appreciate more now the sacrifice she made for her father. I didn’t appreciate it then, but now it means more to me after my mom has passed on, and my stepdad, and my sister, what that means. And then look what Frozen did! They really did it, that sisterly connection! But I think Beauty and the Beast was the start of all that.

TMS: It’s interesting that you bring up her father, because a lot of the time in these types of films, either you have an Evil Stepmother, or a father who’s kind of inconsequential. Like, Ariel and her father fought, and and the story didn’t have much to do with him. But Belle loves her dad, and ends up making this huge choice because of that love.

O’Hara: Oh totally. And a lot of people reacted to that, too. I’ve been told by Disney that Belle has the largest amount of male fans of all the Disney Princesses, which is really cool.

TMS: Because there’s something to her.

TMS: Now you have a career full of film, recordings, work on stage…but I didn’t know that you’re also an artist, and that you’ve been working with Disney in that capacity! I’d love to hear more about what the plans are for your artwork!

O’Hara: They signed me with Disney Fine Art Collectors Editions about six or seven years ago, and it’s just built up! They asked me to do a painting for the digital version–that’s the only way you can get it. And it was fun how they did it, just asked me to create a conceptual piece.

I’ve always painted. I would sell my watercolors in New York on the street to pay my rent (laughs).

TMS: Are you still painting actively?

O’Hara: It’s really my main job now! I did Menopause: The Musical for nine years, and I left the show a year ago, and Disney keeps me busy between the artwork and the galleries, and now [Beauty and the Beast] coming out again, I’m pretty much just working for Disney right now. Semi-retired in a way.

TMS: Well, more like transitioning into a new field…

To check out more about O’Hara’s career and artwork, you can visit her website. And if you’d like to see some of her art in person, she’ll be having some work showing at the Disney gallery Magical Memories in Las Vegas. The 25th Anniversary Special Edition of Beauty and the Beast on Blu-ray is available TODAY!

(images via the Walt Disney Company)