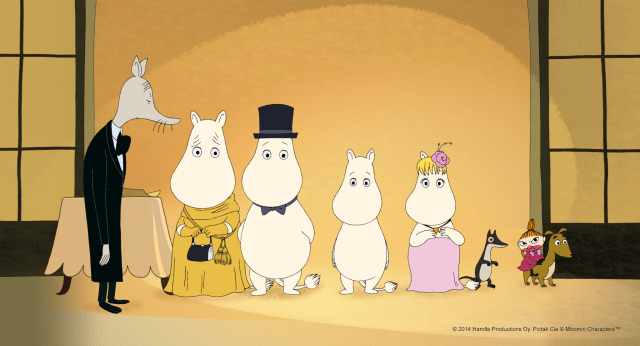 Before I had the chance to see the new animated feature film, Moomins on the Riviera, I not only had no idea what the Moomins were, but that they are such a national treasure in Finland and all over the world! I was happy to get to know them, as they are not only adorable, but have a socially-conscious bent that is the brainchild of their awesomely progressive creator, Tove Jansson.

The Moomins first appeared in Jansson’s comic strip, Moomintroll, in the London Evening News in 1954. Despite looking like hippos, the Moomins are actually trolls – friendly, close-to-nature bohemian trolls who have all sorts of adventures together. Eventually, the comic strips were collected in book form, and the characters started appearing on merchandise and went on to star in adventures in illustrated books for children, animated series and films, and now this new English-language feature film from Finland.

Moomins on the Riviera tells the story of the Moomins (Moominpappa, Moominmama, Moomin, and Snorkmaiden, Moomin’s long-time girlfriend) and their friends as they decide to follow Snorkmaiden’s fascination with the ritzy, celebrity lifestyle of the Riviera and decide to take a sea voyage to see the famed coastal city for themselves. They soon discover that the posh life of the Riviera doesn’t quite line up with their usual simple existence, and each of the Moomins has a very different relationship to that posh life. It is an original story written for the screen, but the writers hoped to emulate the spirit of the original comic strips, rather than the more modern versions of the characters.

I had the chance to speak with one of the writers of Moomins on the Riviera, Beata Harju, about her start in film, what it was like to bring her childhood favorites to life, and why she thinks the Moomins are so special and so important. 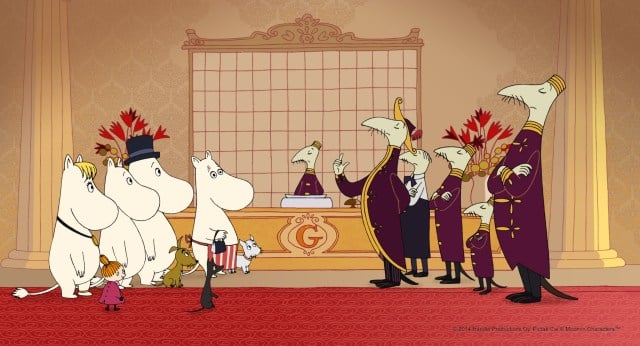 Teresa Jusino (TMS): First, tell me a little about your background: how did you get involved in film and in animation?

Beata Harju: I have always wanted to work in film. If I had to pinpoint one moment, it would be the time in my early teens when I discovered all the making-of footage and director’s commentaries on the Lord of the Rings DVD. Watching Peter Jackson and his cast and crew discussing filmmaking really made me understand the amount of work that goes into creating the illusion – and also that it truly is a craft that you can learn.

I was born in Helsinki, Finland, and moved to New York City at sixteen to study musical theatre when I was accepted to the Professional Performing Arts High School in Manhattan. A year later I began my studies at Sarah Lawrence College, concentrating on filmmaking, theatre and social sciences. Post Sarah Lawrence, I’ve studied improv comedy at the UCB and the Magnet theaters in New York, and at the Groundlings in Los Angeles. After graduating college, the first years I worked on any and every set that I could work on, doing tasks ranging from PA-ing odd hours on a set in Long Island and filming a cheese festival in Times Square, to working at a live streaming office filming concerts in Los Angeles at 3am and assisting with writing treatments and synopses for production companies to learn as much as I could about filmmaking in addition to our own projects.

Today I work with live-action and animation. As an actress, I’ve played Honey in Who’s Afraid of Virginia Woolf and Jean in August: Osage County at the Swedish National Theatre. I’ve played a zombie in a music video for Big Tree, and last summer I played a 14-year-old teen heart throb in a comedy feature film, and a comedic nurse in a drama short film about an alcoholic mother titled “Puuttuminen.” With my own writing, I tend to gravitate more towards stories that are comedic. I enjoy exploring the inherent humor in everyday life and human interactions, and breaking existing stereotypes. To this day, I love being on set, but it was also incredible to see our jokes and plot moments come alive in the story reel stage of the animated film. 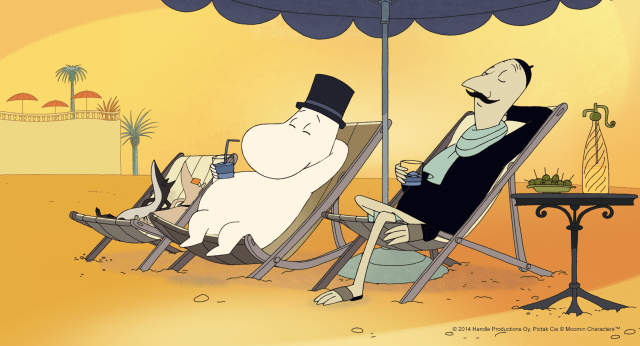 Harju: I’ve fallen in love with the Moomins on three different occasions; as a child, tuning into the children’s animated TV series every Saturday morning; as a pre-teen, discovering the comic strips that were originally meant for grown-ups in my grandparents bookshelf that featured storylines of the “IRS man” scaring everyone when he comes to town to collect taxes; as a grown-up, I have really appreciated the boldness and forward thinking mindset Tove Jansson had when she wrote the stories. They Moomins truly stand time today with their themes of universal acceptance and open-minded curiosity. The Moomins speak to such vast audiences because they are very multi-layered. As a child it is easy to understand the physical humor of the Moomins, and to follow along their emotional journey because they express it so honestly. Sometimes the audience knows Moominpappa is upset before he understands it himself. It is also a world that lots of children would enjoy playing in; it is inherently safe, accepting to all kinds of creatures, and full of adventure. We know that ultimately the Moomins will be okay. Whatever mishaps they are unable to fix, usually pure luck does the job. And everyone is welcome to join.

TMS: What surprised me most about this Moomins film is that, even though it was a movie that was appropriate for children, it was also making a lot of very mature social commentary about class. Is that always what Tove Jansson strove to do in her work? Is this same level of commentary found in the original comics? What other issues did she explore through these characters?

Harju: Tove Jansson’s mature social satire is the reason we wanted to make this film based on her original comic strips. All of the humor pertaining to social class, romanticizing poverty, and the absurdity of Snorkmaiden’s infatuations exists in Tove Jansson’s original comic strips. There have been many Moomin interpretations in the form of TV series and feature films earlier, but we wanted to make a movie that would truly be an homage to Tove Jansson’s bold and poignant humor. The original idea to make the film stemmed from conversations between Hanna Hemila, our producer and co-director, and Sophia Jansson, the niece of Tove Jansson, who is the artistic director of the Moomin Characters. 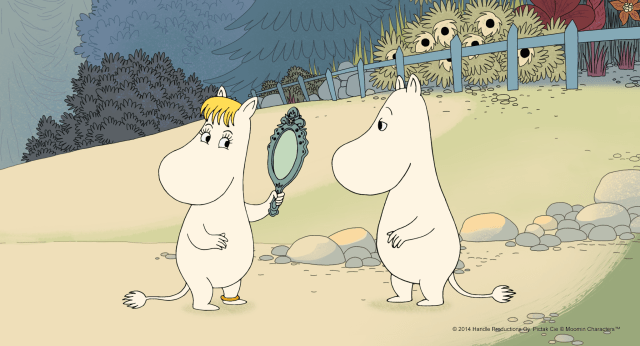 TMS: Something else I loved is that the most interesting characters in this film were female! Moominmama, Snorkmaiden, and even Little My (the brattiest, but most badass little girl ever!) were the characters I found the most fascinating, and in this film, Snorkmaiden in particular has a very large emotional journey. Have the Moomin ladies always been this much at the forefront and this interesting, or is this a more modern take?

Harju: It is wonderful to hear that! Moominmamma, Snorkmaiden and Little My are all very prominent characters in Tove Jansson’s Moomin world. To this particular story, we added Little My. She is such a fascinating and beloved character, that watching the Moomins venture to the Riviera without her would have felt like something was missing. Her wit and social awareness provide a great balance to the Moomins’ naivete. Otherwise the ladies of Moominvalley are as essential to the Moomin world as the boys are.

TMS: Something I noticed about this film is that, even with characters like Little My who are trouble makers, the tone of the film is very earnest and genuine, whereas much of American animation – even wonderful films like those coming out of Pixar that seem to live to make you cry! – rely on sarcasm and snark for their humor more often than not. Do you think that this earnest sensibility is unique to the Moomins, or is that something generally true about Finnish animated work?

Harju: There is a kindness in the Moomins that is rare in fictional characters across the board. The Moomins demonstrate that even kind and earnest characters have issues, conflicts and adventures. We don’t need life-threatening villains to demonstrate relatable emotions. We all know what jealousy feels like, and it can be as simple as my older brother picking a better ice cream flavor right after I’ve licked my own, now seemingly-subpar pick.

TMS: Was the film written to be in English, or was this dubbed? Why was that decision made? Do you think that anything will get lost in the cultural translation for an American audience?

Harju: We wrote the original screenplay in English. Our writing team is international, and the comic strips were originally published in English in the London Evening News, so it felt natural to write the screenplay in English. Our Finnish writing team wrote the Swedish and Finnish translations of the film, and our French team wrote the French translation. Of the languages that we translated, sometimes the jokes did change a bit, and some jokes work better in Finnish than they do English, and vice versa. But, as we had the same writing team write the translations into Finnish, Swedish and English, those versions of the film will be as close to the original as possible. We also referred to Tove Jansson’s own translation of her comic strips to compare how she had translated certain moments and jokes. In terms of larger cultural symbols getting lost in translation, it is hard to tell as I am very biased with my Scandinavian-American viewpoint.

Moomins on the Riviera is currently screening at the Laemmle Royal Cinema in Los Angeles through this Thursday, December 10th. Keep your eye on the film’s website for information on this and other screenings!