The Mary Sue Interview: Liana Brooks on Her New Sci-Fi Thriller: The Day Before 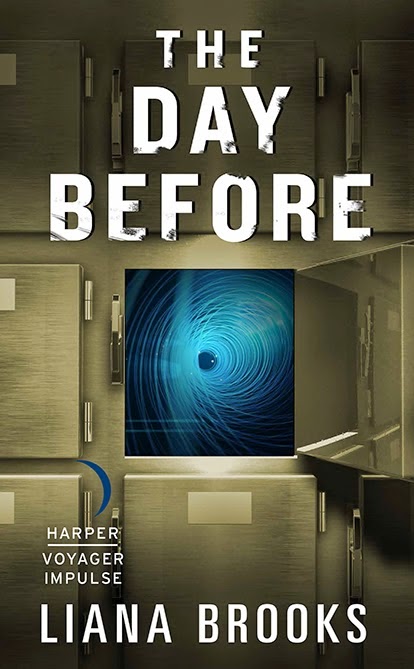 Liana Brooks’ The Day Before follows ambitious detective Samantha Rose as she investigates a homicide in rural Alabama in the near future. But in an Orphan Black-esque turn of events, the murder victim turns out to be a clone—complicating the homicide and in fact reducing it to nothing more than littering. But Sam is not to be deterred. We spoke with Brooks about her sci-fi/thriller crossover, lady protagonists, and cloning.

Sam Maggs (TMS): Tell us a little bit about The Day Before.

Liana Brooks: It starts with a dead body in an empty field, and a young investigator who is trying to prove to everyone (including herself) that she isn’t a failure. The Day Before is a thriller. The main character, Agent Sam Rose, is racing to find the killer and with every clue she finds she unburies something deeper, darker, and far more sinister.

TMS: What inspired you to set the book in rural Alabama?

Brooks: I was living in rural Alabama when I started writing the book, and it’s a part of the country that doesn’t get enough love. People are lyrical about their love for New England autumns or spring in the Rockies but when you have great black storm clouds rolling in, a piercing beam of pure sunlight, and a sudden dazzling of golden leaves… that’s Alabama and it’s breath-taking.

I travel quite a bit, usually by car, and I’ve come to love rural America. It’s a forgotten world. There are little towns and historic sites strung out across the country that no one knows about but the few people who live in that area. I think that’s why rural Alabama was such a perfect backdrop for a story that focuses on marginalized people.

In the book the clones are the ones fighting for rights. They’re human, but not human enough. How many groups of people feel that same way? How many groups are written out of history, out of law, and out of our cultural narrative?

Stop someone on the street and ask them to name an influential female scientist of the enlightenment. Ask them to name the top five businesswomen of the 1800’s. Ask them to name a single black inventor who isn’t George Washington Carver. These people existed, they had fascinating lives, they had tragedies and triumphs, and they’ve vanished from our cultural memory like a western ghost town.

We lose so much by ignoring the small things that make up the fabric of our society. Whether it’s small towns, or small tragedies, or small people humbly doing the day-to-day work that keeps everything running, they matter. In a culture of celebrity I think it’s important to remember the rural roots and all the small things.

TMS: Have you always been fascinated by cloning?

Brooks: Ever since I since I started reading science fiction when I was nine or so. I was fascinated by AI – artificial intelligence – first. Issac Asimov’s I, Robot has Dr. Susan Calvin being interviewed about her work in the field of robotics and that was a gateway for me that led to really asking What Makes Us Human? Is it genetic? Is it intelligence? Is it some mystical soul, or is it something we can dissect in the lab?

Louis McMaster Bujold explores cloning in her Vorkosigan Saga with multiple cultures who all view clones differently. The people of Jackson’s Whole view clones as things to be used and discarded the way they are at the beginning of my book. The Betans view clones as people. If you haven’t taken an opportunity to read her books you need to. They’re amazing.

Cloning is already happening in the real world. It’s moved out of fiction and I’m so excited. We’re starting to clone organs, which means we can stop putting people on a waiting list for a donor for years and just clone them a new replacement. Without the messy bit of cloning a whole person and chopping them up, I might add.

If we ever reach a point where we clone an entire person they need to be recognized as individuals. Not an off-shot of their genetic donor, but as a unique individual and a human being. I’ll get that debate out of the way right now: I’m pro-clone rights. I’m pro-people. Everyone should be treated with respect and with gratitude for what they offer the rest of the world.

TMS: Tell me a little about creating a strong, complex female protagonist in Sam.

Brooks: First, start with the assumption that everyone is strong and talented if you put them in the right situation. Second, understand that all people are complex regardless of gender. Once you have those two factors in play the work is mostly done. All that’s left is to discover the character’s strengths and weaknesses so you can exploit their weaknesses and let the resolution of plot rest on them finding their true strength.

Anyone can be a hero.

It’s all a matter of choice. That too is part of The Day Before. As the Jane Doe series continues the readers will get to see what would have happened if Sam had made different choices. What if she hadn’t helped Mac? What if she did what Emir asked?

All of us are in Sam’s shoes, I think. We’re all faced with choices every day that reshape our lives moment by moment. How you treat a single person matters. A single word in a job interview can change your entire future. That’s what life is. At the heart of every great story you’ll find a choice. And in the tale of any great hero you’ll find the one choice that only they were willing to make.

TMS: What do you love about science fiction? Do you find that genre fiction has more awesome ladies than other kinds of fiction?

Brooks: It would be a lot easier to list what I don’t love about science fiction (not enough people read it and we don’t get enough SF movies!). Really, what’s not to love about sci-fi?

Science fiction is the genre that creates the future. Every major innovation of the past century was written about in sci-fi and fantasy before it became reality. You can find memes all over the internet showing how some “futuristic” Star Trek gizmo is now something we use every day.

As for having more awesome ladies than other kinds of fiction… You know what? I’m not going to wade into the genre wars.

Sci-fi and fantasy don’t have better female characters than other genres, they have different types of women. Sci-fi often highlights women who are physically active: fighter pilots, assassins, sword-wielding powerhouses of personality. These are great characters and I love seeing them. But you’ll just as often see SF/F women in leadership roles.  Sharia Munshara-Metzger (Munchkin) in the Jason Wander series. Captain Tanya Desjani in the Lost Fleet series. Beka Rosselin-Metadi from the Mageworlds series. Ky Vatta, Cordelia Naismith-Vorkosigan, the list goes one. These are all multi-faceted women. They’re great thinkers, strategists who adapt fast to every situation. They’re fighters, lovers, mothers, and leaders.

They get to be multi-faceted, complete human beings because the genre looks at the whole human condition. All of these characters are in large series that span years, sometimes decades, and so you get to see them grow from being young women learning to become comfortable in their own skin, to these great leaders who have shaped human history. You see the same in epic fantasy, of course, but I think in some other genres the women seem to do less simply because you’re looking a shorter span of time.

Romance focuses on a few moments of a relationship, usually the Getting-To-Know-You phase. UF novels sometimes cover only a few days, or a few hours. The same with crime fiction. The characters there aren’t weaker, or less compelling, or somehow inferior, it’s just that the reader spends so much less time with them than they might get in a larger sci-fi setting.

I try not to be biased, but I think sometimes SF is better because it has the biggest stage. Authors have the whole universe to play with. With that much room to move, no one can write small characters. No one can be insignificant when the stars are your spotlight.

TMS: Samantha Rose is also my name. Is it or is it not the best name?

Brooks: Sam, how can you even ask such a question? OF COURSE IT’S THE BEST NAME EVER!!!!

It’s your name and it’s the name of one of my very best friends! Which means we’re going to be best friends! You have to come to my house and eat cookies and talk about books with me. It’s destiny.

Fun fact, I stole my best friend’s name (and yours!) for the book with her permission. She was very amenable, as long as I promised her a hot love interest. So, if I go missing, it’s because she hasn’t seen any of the book since an early draft and the ending was not up to her standards. (I’m sorry, Sam! I tried!)

The real Sam is much better with guns than the fictional one. And in the interest of maintaining plausible deniability for any future incidents of interest, I’m not going to let you dwell on why a sharpshooter and a crime writer are best friends. Let’s go eat cookies!

The Day Before is available through Harper Voyager now.