Interview: Jena Friedman on the Power of Political Comedy | The Mary Sue

Interview: Jena Friedman on the Power of Political Comedy and Trying to Find Humor in This Mess 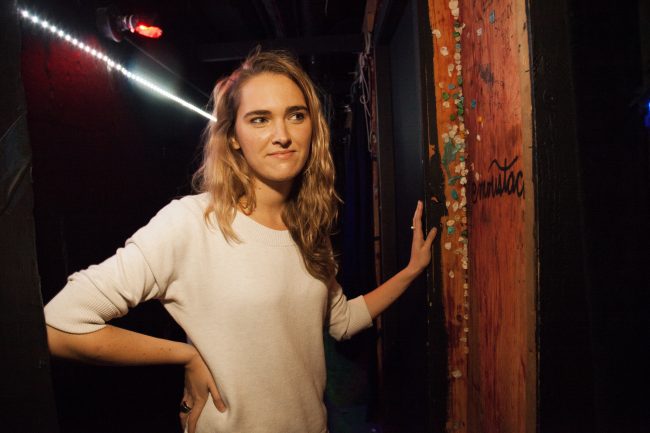 The last time we spoke to Jena Friedman it was October 21st–leaves were turning yellow, optimism was in the air, and we were all still capable of feeling joy.

I’m half-joking, but as I listened to her hour-long special “American Cunt,” a hilarious take on the election and the U.S. body politic (one track is titled “The Abortion Portion”), I thought about how hard it is to be funny right now. How do you find comedy in this moment, and what can comedy do for us right now that other media can’t? In an email interview, Friedman told me about how she sees her special post-election and how political comedians are fighting against the current administration. You can find her special on iTunes now.

TMS (Charline): “American Cunt” is pre-Trump–do you feel like you see it differently now months later?

Jena Friedman: I see everything differently now, post-apocalypse. If anything, “American Cunt” is just a time capsule of an era before the fall of America, when women still had hope.

TMS: With reality being almost like a bad punchline itself these days, what is it like to be a comedian that addresses a lot of these things at risk? Is it challenging to try and find the humor in these infuriating and scary moments?

Friedman: It’s definitely tricky trying to mine comedy out of the current mess that is our political landscape. It was hard enough when he was just a joke, but now that he’s in the White House and making real and disastrous decisions that are hurting people’s lives, it’s very hard to find humor in it. On the bright side, parody and satire seem to be his one vulnerability, as evidenced by his response to SNL week after week, so I do think it’s important for us “comedians” (in quotes just because I was a comedian prior to the election, but lately I have felt more like a talking think piece) to continue to find creative ways to lampoon him and his enablers (I’m calling the current administration “enablers”) and get under their already thin skin.

TMS: Why do you think comedy is such a effective medium for talking politics? Is it just because men won’t listen otherwise, or do you think it does something that other platforms can’t?

Friedman: I don’t think it’s a gender thing as much as a human thing. Comedy is disarming. If people can laugh about something, it makes it easier for them to be receptive to the ideas behind jokes.

I also think comedy is a great medium for political discourse. My generation grew up on The Daily Show as our primary news source, and we see political comedians as more honest than politicians and news anchors, if for no other reason than that they aren’t beholden to special interests or ratings in the same way. So for that reason alone, we’re more receptive to comedic news shows than all the other noise that’s out there.

Also, we’re currently in a moment where the internet has provided so much transparency that people who haven’t historically followed politics now are, and are now seeing how disingenuous so many politicians are and how corrupt/broken the system is. So I think if political comedians are able to distill the madness of our times into coherent jokes, or just say what people are thinking but are may be afraid to say, political comedy can be very powerful.

TMS: How do you hope people respond to “American Cunt”?

Friedman: I wrote the show prior to the election, with the specific intention to talk about what it is to be female in America in 2016 and with the hope of maybe activating people to support Hillary. At the moment, I just hope people who feel sad or frustrated by the election can watch “American Cunt” and maybe feel less alone.

TMS: What is your approach to jokes about something like gender identity or race, with intersectionality being so crucial? I was curious about this, especially in relation to the Jenner and Fox jokes you make in the album.

Friedman: I think you can joke about anything as long as it comes from a place of empathy and humanity. The trans portion of the show was always the touchiest for me, especially as our cultural literacy around gender has evolved so much, even since I began writing the show. I wanted to include trans women into the discussion because I felt it was important in a show about women. Some of my jokes in that section may be less sensitive than others but I articulated those concerns of mine as well. Plus, as a supporter of both Ted Cruz and Donald Trump, Caitlyn Jenner is fair game.

TMS: What can fans of yours look forward to–what are you working on now?

Friedman: I am directing my first feature about a woman who falls in love with a serial murderer. The cast is killer and we’re planning to shoot it this summer in New York. I’m also working on a second stand up album and developing two TV projects as well.