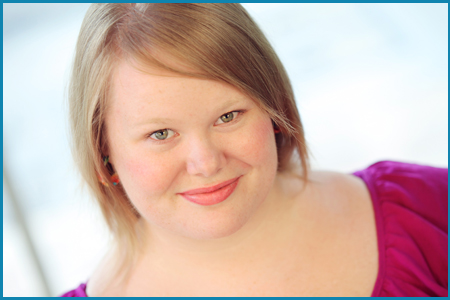 Tomorrow brings the return of one of our favorite rays of sunshine! Season Two of Unbreakable Kimmy Schmidt premieres tomorrow on Netflix, and Kimmy isn’t the only ray of sunshine that will be on display. Comedy powerhouse Jen Ponton will be guest starring in an episode of Kimmy Schmidt in the role of “Baby Debbie,” and she apparently gets to work with Jeff Goldblum! Already this sounds weird…but like, in a good way.

Ponton has started to make quite a name for herself in comedy, having worked on a Tina Fey show once before on 30 Rock, as well as shows like Adult Swim’s The Heart, She Holler. She’s also exercised her dramatic chops on shows like The Good Wife, Law and Order: SVU, and The Slap. But probably the most important thing to her about her career is being able to use her platform as a way to advocate for body positivity and a more diverse representation of body types in Hollywood.

In an email interview with Ponton, I asked her about Kimmy Schmidt, how she approaches comedy, and what being a body positivity activist means to her. Here’s how the convo went down…

Teresa Jusino (TMS): Why comedy? Aside from you probably, you know, just being funny, what is it about comedy that draws you and makes you want to live there?

Jen Ponton: Being funny, yes, definitely! Because funny feels good, right? Life already throws so many curveballs, and we all have our ‘stuff.’ Comedy shines a light on the dark, it shows you that the bad stuff doesn’t have to always feel so bad. ‘Check your baggage at the door,’ basically. Having it as an outlet and a touchstone really helps you keep things in perspective and cope more easily with the tough times.

TMS: You’ve worked with Tina Fey before on 30 Rock. What’s it like going back to a Tina Fey set for Unbreakable Kimmy Schmidt? What’s similar, and what’s different?

Ponton: If you guessed THE BEST THING EVER, that is correct! The crew and production team were all 30 Rock family as well; these people adore each other and work so well together. Everyone does their best and has such a good time. No one’s grumbling or moping–which is important and challenging for 16-hour work days, you know? So that feel-good set was definitely the same for both.

I also got to work with incredibly funny people on both–Kelsey Grammer on 30 Rock, and now Jeff Goldblum on UKS. The biggest difference for me was that my plotline on UKS is a media circus! So as opposed to a few scenes with Jack McBrayer, I spent several days with hundreds of extras and a large team of guest stars and co-stars. It was a much more social experience and environment.

TMS: How did the gig on UKS come about, and what can you tell us about “Baby Debbie” without spoilers (obviously!)?

Ponton: Okay, so I got the best phone call of all time when I was on vacation after Thanksgiving. It’s maybe 8pm, and I see that my agent has both left me a voicemail and texted me: “Call me ASAP!” I knew I was starting work on Deadbeat when I came back, but I was also then attached to a project in Arkansas that hadn’t yet been finalized. I called her back and she said, “I don’t think you can go to Arkansas.” “Why?” “Because Tina Fey’s team just called. She wrote a role for you on UKS and she really wants you to play it.”

My character, Baby Debbie, gets to know the Mole Women when Jeff Goldblum (‘Dr. Dave’) has them all as guests on his talk show, digging into their childhood traumas and the awful things that have happened to them. I had a blast playing her, and I was so honored that Tina wanted to bring me back! Working with her for life is basically my dream career.

TMS: I know that you’re a body positivity activist, which I think is awesome! I’m a size 22/24, myself, and it’s something that I struggle with for various reasons. One thing I struggle with is the fact that, in my writing (and my acting in a past life), I tend to write/want to be in dramatic stuff, but people always expect me to do comedy or “be funny” because of certain preconceived notions. (I mean, I AM funny, but that’s not the point!) Now, you do comedy (and do it well!) for a living. How do you subvert body stereotypes in your work, especially in a genre that tends to not treat fat people particularly well?

Ponton: A. YAAAAAS SOLIDARITY B. I totally hear you. One of the biggest aims in my work–as I’m sure you can relate to–is to tell stories that don’t negate my body, but that aren’t centered around it. It’s been a real gift that virtually every role I’ve worked on could be for a person of any size–and the roles that I have played that are size-specific are of women who are empowered and don’t let the opinions of others dictate their self-worth. My representation and I have always been on the same page, and I am not submitted on projects where the character hates their body, full-stop.

In fact, earlier this year I was signing contracts before screen testing for a series, and the character seemed to have an arc that eventually came around to self-love. I cared about playing her because she was deeply relatable for so many people, and her inner transformation was something unlike we’ve seen on most network TV. The contract that was sent to me added verbiage about mandated weight loss through the duration of the show, and after a very tough conversation with my team, we declined. The wait for their response was agony–it was entirely possible, if not likely, that I had blown my chance to star on a series because important feminist hooey. But about 48 hours later, I got the call that the network felt so strongly about me that they were nixing the addendum altogether. I cried all the way home in the car. The fact that they chose me, BoPo agenda and all, over huge corporate sponsors–that was huge.

There has to be that hope there, that people of size can see a character who looks like them treating themselves with love and respect and worth. Remember when we were kids and no one did that, with the sole exception of Tracy Turnblad? People of size need that mirror held up, and I am deeply committed to doing that in my career and life.

TMS: Recently, Amy Schumer spoke out against the label “plus-size.” I was curious as to what your take on that term was. Is it a helpful way to get the fashion industry to focus on the needs of an underserved market? Or is it an unrealistic, unnecessary descriptor? Or both?

Ponton: I am not particularly irked by the term ‘plus-size.’ In terms of usefulness, it is really helpful if I can expect a retailer or designer to have cool things that I can comfortably wear, so I’m not all gung-ho against the label. In my heart of hearts, does everyone just carry all sizes, and are they just numbers? Totally! (PS- Are you into EShakti? Because they are my heartbeat and I want to throw my money at them.) In the meantime, all I care about is that more labels and retailers acknowledge that we exist.

I don’t really see ‘plus-size’ as a necessary evil label, but I think that’s also because I don’t see it as a bummer. I identify as fat without the crappy stigma against the word. The problem is the judgment that people–straight sized people, but especially people of size–then project onto ‘plus size’ and how they feel that affects their self-worth.

You can catch Ponton when she appears on Episode 11 of Unbreakable Kimmy Schmidt, Season Two, which you’ll be able to stream starting tomorrow! If you crave more Ponton after that, she’s also guest-starring in Episode 8 of the third season of Hulu’s hit comedy Deadbeat!