Come on down to Harmontown... 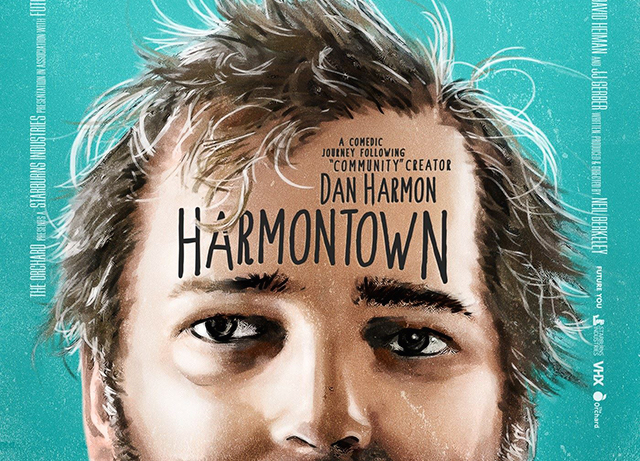 We’ve already told you about the doc Harmontown, out now in limited theatrical release and on VOD. In it, we follow Community creator Dan Harmon as he takes his Harmontown podcast on the road after being unceremoniously fired from the show he created post-season three. We interviewed Harmon himself about the flick—and about how things are going with Community‘s sixth season at Yahoo!, because I couldn’t not ask—and now it’s time to hear from director Neil Berkeley.

Rebecca Pahle (TMS): To what extent were you familiar with Community and Harmon’s other works before you started doing this doc?

Neil Berkeley: Not very much at all, really. I knew who he was and had seen Community a handful of times. I had never heard the podcast, so I had a lot of catching up to do. Although, I knew enough about him to know that he’d make a great doc subject… and after I listened to the podcast, I knew there was something interesting there.

TMS: Was there any awkwardness with Dan at first, considering you’d only met him once? “Hi, I’ve had a few conversations with you, and now I’ll be filming what has to be one of the most emotionally and psychologically painful periods in your life. Here’s your mic.” Establishing a rapport with a subject is an important thing for a documentarian, and the dynamic with Harmontown seems like it had the potential to be… weird.

Berkeley: Probably more weird for him than me, to be honest. Dan is very open about the idea that we’d all be more honest if our lives were constantly being recorded. Also, he’s built to be in front of the camera… he’s baring it all in everything he does, so for a stranger to come into his house with a camera wasn’t weird at all. In fact, the bathtub scene we shot in the beginning of the movie [where Dan shares his doubts about the upcoming tour while taking a bubble bath] is the first thing I shot. It didn’t take long, but I had to quickly acclimate to not having to acclimate, if that makes sense. But after a few shoots we had a rapport, and I realized that nothing was off limits. And that was really freeing. It felt good heading into the tour knowing that Dan would answer any questions and would allow us to shoot anything. I know he had private moments off-camera, but for the most part it was anything goes.

TMS: Near the end of Harmontown, it almost felt like I was attending a therapy session. There’s some heavy self-examination there from Harmon, and I’d be lying if I said some of it didn’t hit home. Did you just kind of cross your fingers and hope you’d get that level of emotional candor? How much was you prompting certain conversations and revelations, and how much was you being a fly on the wall and letting your cameras roll?

Berkeley: It’s my style to be as fly on the wall as possible, but looking back I’m sure there were questions I asked that caused certain things to happen. Before one show I asked Dan if there was anything he could do to make his audience not like him, and he ran with that. He went on stage and revealed a lot about himself and had a conversation with [his fiancée] Erin that I think caused some people to take a step back from their fandom… it certainly has that effect in the movie. But that’s really what Harmontown is all about. If the movie were a silly romp around the country and didn’t ever get emotional I think it would have been a dishonest story. That was one of the tougher things about editing the movie. The best parts of the show (to me) are the moments when it gets quiet and Dan has an honest conversation with the audience. However, for a comedy tour doc that isn’t what you’d usually expect, so trying to serve both those masters was a difficult task. I think we did a good job, and from what I can tell audiences are responding to the the darker parts as much as they are to the funny parts.

TMS: When did Dan getting re-hired for season five happen during the process? Were you pretty much done at that point? It made for a perfect post-script.

Berkeley: It was a few months after we got back. It did serve as a great post-script, and it was a story that I would have loved to dig deeper into, but it was impossible. Anyone wearing a tie to work wouldn’t talk to me, so I was really only able to tell one side of the story. Also, most of the people involved were counting on a paycheck, so I think they were somewhat guarded in their answers to some questions. In ten years there’ll be a great doc about the whole Community drama, but people are too close to it right now. When that person makes it, they should call me. I have great shots of Dan looking wistful in the study room.

TMS: Was there anything you were surprised by when filming Harmontown, either about Dan or his fanbase? Do you have a moment that stands out for you as a favorite?

Berkeley: There were lots of moments. I was surprised at how much I would love shooting on the road. I was surprised by how Dan would stand in line for hours after shows signing autographs. Dan’s fans are amazing, and I think I was certainly surprised at how much of a fan I became of them and how much they would drive the narrative. They were really the reason I wanted to dig into this and show the world what happens in the back of that comic book store.

There were lots of great moments, but I’d have to say the entire Brooklyn night was magical. It was the perfect night of shooting, performing, and an amazing audience. We were all up ’til four in the morning because we were so charged by the whole thing. When I see the crew or cast, we still talk about how amazing Brooklyn was. But everyone says that about Brooklyn, don’t they?

Find out more about Harmontown on its official website.