We Talked to Dan Harmon About Community, Harmontown, and the Epic Broship of Troy and Abed

All aboard the train to Harmontown 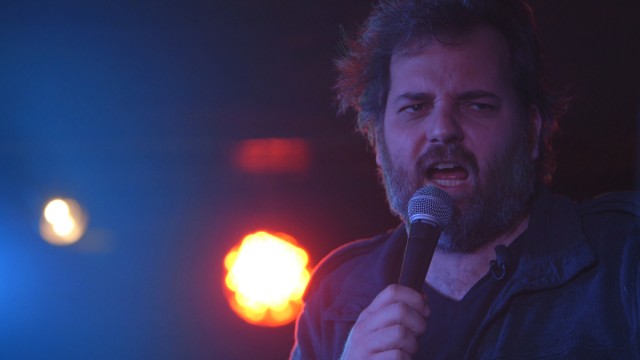 Reasons I loved this year’s New York Comic Con: I got to see great cosplay. I was able to buy five amazing posters in ten minutes. (My bank account’s not happy, but I am.) I had the chance to meet some of you guys at Geek Girl Headquarters. Oh, and I got to interview Community and Rick & Morty creator Dan Harmon. That’s kind of a big one.

The subject of the interview is Neil Berkeley’s documentary Harmontown, which has as its subject the tour Harmon took his podcast on after NBC fired him from Community post-season three. More than your standard tour doc, though, Harmontown is a meditation on creativity and being an artist, and how sometimes external pressures and internal things like insecurity and self-destructive tendencies can really do a number on one’s head.

But I’m a fan of Community, after all, so I wasn’t not going to ask him about it. Like how things are going with season six at Yahoo! and how the friendship between Troy and Abed, AKA the world’s most perfect Jaeger pilots, evolved. It was cool. Cool cool cool.

Rebecca Pahle (TMS): Coming out of Harmontown, it almost felt like I was getting out of a therapy session. It caught some really intense, dark moments for you. Was there ever a point when you were like “No, I don’t want this to be filmed. Turn the camera off.”?

Dan Harmon: No, I gave Neil that footage of me drunkenly rambling at the mirror with my ear-cam on because I felt from watching some cuts that he might need it. You know? I recorded it in case he would need it! I feel like, as a fan of documentaries, if I don’t feel like I’m intruding as a viewer—if I don’t feel like I’m stealing something, getting away with something by watching—then I feel cheated. I feel like I watched some kind of commercial or stunt. I don’t like the voiceover-driven…”Let me tell you something about myself. I always loved chairs! So I asked myself: Where do chairs come from?” It’s like, I don’t know if this should be called a documentary. I don’t feel that really crucial sense of being a voyeur. If the cameras were around and something uncomfortable is happening, I compartmentalized the part of my brain that was the subject, saying “This is inconvenient that the cameras are here,” from the part of me as a producer, saying “Cha-ching!”

TMS: Was it weird for you getting back into Community for season 5, having not written the characters for a while?

Harmon: It felt natural enough to come back. Season four didn’t redefine so much that that any kind of juggling act needed to happen creatively. Canonically speaking, Jeff graduated, which was a good thing, and Pierce left the show. So those were the only things we had to figure out. Writing the first episode was kind of difficult narratively, to figure out what the story would be and how to structure it. But in general, those actors are in charge of themselves, and those characters are already alive. You can’t really do much about them. You just kind of come up with stories and jokes for them.

TMS: Related to the issue of the characters evolving naturally, was the friendship between Troy and Abed initially going to be such a big part of the heart of the show? Or did you see the chemistry between Donald [Glover] and Danny [Pudi] and say, “I’m going to do more of that.”

Harmon: Absolutely the latter. Hardcore fans might be interested to go back and watch the first six or so episodes of season one. You can very clearly see a very conscious effort to pair Troy with Pierce. We thought that Chevy [Chase] and Donald would be like the new Beavis and Butthead on the show. That was going to be the idea, that they both shared a kind of juvenile energy. So you can see that in actual episodes.

And, furthermore, the really interesting thing is that the tags you’re watching on those episodes, the parts that come during the credits, those are shot later. If you’re watching the first six episodes of Community, season one, you’re seeing Pierce and Troy forced into this Beavis and Butthead kind of arrangement, while in the tags you’re actually seeing a lot of Troy and Abed. [Even] offscreen, Donald and Danny were just amazing together. We saw them on a red carpet, and one of them started beatboxing and the other started rapping. I was like, holy crap, these guys are great together! And they were best friends within a couple days of meeting each other, they were helping each other move and wearing little shorts to help each other move, and people were just giggling about how childish and cute the whole thing was.

TMS: No shirts with hashtags on them, though?

TMS: How’s it been working with Yahoo! so far? Where are you with season six?

Harmon: We’re at about our fifth idea. We’re breaking stories right now, and we’re at about the fifth one. Within the next couple of weeks production will slowly start pre-producing things based on the ideas that we have. We had a meeting with Yahoo! that was really refreshing and splendid. They’ve got a big staff full of very eager, honest, hardworking people that are all really excited about Community. Comparing Yahoo! to NBC would be like apples to oranges, but if you regard Yahoo! as occupying the same space that NBC was occupying in the mythology of the show, it’s an awful lot like Annie leaving the orphanage and getting in Daddy Warbucks’ limo. There are times when I get into the elevator after a meeting with a Yahoo! person and I’m like, “I’m going to let these people down.”

TMS: People get so attached to Community, and to you as a creator, like we saw in Harmontown. How do you feel about the level of almost-worship that you get from people?

Harmon: I feel fine with it. I don’t feel like it gives me a distorted view of my value as a person. I think it’s just a thing. It’s like if people are giving you a bunch of food, you could be like, “Well, this food doesn’t make me different, but it does make me very lucky!” So people lavishing me with attention and telling me that I saved their marriage or that their family loves my show or that I make them feel like a better person, that’s all great, especially when it’s focused on the work. Because I put a lot of energy into Community and Rick and Morty, so if somebody says, “I got energy out of it,” I’m like good! This is working. It gets a little more uncomfortable for me, as a Midwesterner, when it’s like “You’re a god! You’re a great person!” I’m like, no, I’m not, I’m definitely a piece of shit, that’s why I work really hard. But I don’t punish people for that. Most of my fans are very practical people. You know you’re not off the hook with a Harmontown fan [laughing], because they’re very scientific. Good judges of character. So if they detected that it was going to my head, I’d be toast.

TMS: Is thinking of the fans, of what they will like and won’t like, part of your creative process?

Harmon: It’s kind of unavoidable. It’s so unavoidable that the process actually involves trying to forget about that. I try to imagine that the characters are real, and I try to imagine myself watching something on television and reacting by saying, “Holy shit, I can’t believe this is on television. This is so good, this is making me so happy.” Then I reverse engineer what would make me react that way. I cast myself as a viewer and try to blow that guy’s mind.

TMS: It kind of felt like season four of Community was the opposite, coming at it from a perspective of “What can we do that fans of the show will want to see?”

Harmon: Yeah, I was very flattered and confused by their decision to do what ultimately felt like fan service. [At San Diego Comic-Com 2012, showrunners Moses Port and David Guarascio] stepped out in front of 3,000 people, and I think that energy that hit me a long time ago hit them. And they’re like, “Holy crap, we have to make a certain kind of show for these people. We have to make it personal for them.” That’s the positive spin… And they could’ve easily done a show that’s set in a community college that was a decent sitcom, and it would have blown my show out of the water [in terms of ratings]. My life would have gone very differently. And they didn’t do that! And I think they didn’t do it because of altruism, because of the viewers.

Go to the official Harmontown website for information on upcoming special screenings. The film is currently out in theater and on VOD.