Interview: Director Gabriela Cowperthwaite on Megan Leavey and Owning Being a Storyteller

I’d already had the pleasure of speaking briefly with director Gabriela Cowperthwaite and the star of her new film Megan Leavey, actress Kate Mara, in a recent video interview. However, I wanted to speak in a little more depth with Cowperthwaite, as we love us some accomplished female directors around here. So, once you’ve bought your tickets for a showing of Megan Leavey this weekend, check out more on Cowperthwaite below!

Cowperthwaite came to directing in a roundabout way. After she graduated from college, she ended up moving to “a podunk town” in Colorado, where she and a friend started “not a very good newspaper.” However, she was curious and engaged and loved telling stories. Through that experience, she thought she’d end up a journalist. That is, until she went to grad school at USC.

She was studying poli-sci there, but when a friend at USC’s film school asked Cowperthwaite to produce a documentary she was directing, everything changed. She fell in love with the world of independent documentaries.

“I realized I was [storytelling] in every other aspect of my life. In reporting and journalism, I was loving stories and doing deep-dives into them. So, I feel like I almost stumbled into directing and just fell in love with film.” Looking back, she also realizes that her love of storytelling goes back even further than the newspaper she started, reminiscing about playing around with her father’s Super 8 camera with her brother when she was a kid.

She stopped pursuing her PhD to work in documentaries full time. “I felt like, not only that I had something to say, because everyone has something to say,” she says. “But I had a way I wanted to say things. I think that’s the difference between wanting to be a director and enjoying watching films.”

Eventually, she did documentaries on topics as diverse as the war in Afghanistan and sports, until finally she directed the documentary that really put her on the map: Blackfish, which tells the story of a killer whale named Tilikum in order to underscore the problems in the sea-park industry (I’m lookin’ at you, Sea World!)

What’s interesting is that, other than one film producing class that she took at USC in order to work on her friend’s documentary, she never studied film. Everything she’s learned and all the work she’s done has purely been the product of on-the-job training, “begging to be on shoots” and “bringing coffee to documentary directors.” 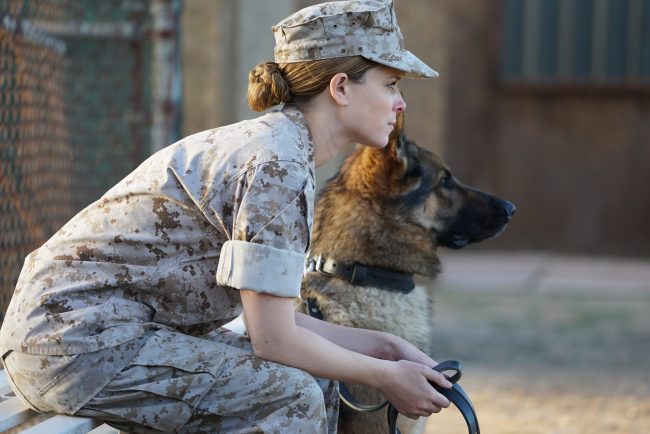 Being based on a true story, Megan Leavey seems like the perfect bridge between documentary filmmaking and narrative, but Cowperthwaite hadn’t really given thought to narrative until she was asked.

“I was approached by managers and agents,” she replies when asked how Megan Leavey came about. “Blackfish started striking a mainstream nerve, and I was approached by agents and managers who asked if I was interested in doing narrative. And I actually hadn’t given it much thought. Again, it was never presented to me as an option. To even have a hat in that ring.

“You don’t ask permission to make a documentary. You scramble together a crew and then start filming and then scrounge up money. With directing a feature, I just imagined insurmountable hoops to jump through to get there. So, it wasn’t even on my radar. When I was asked, I’m a story-driven person, so the concept of reading scripts was really exciting for me. You mean I get to just read stories and imagine how I would depict them? That sounds too good to be true. So, I went for it.”

So going in, Cowperthwaite had a preconceived notion of what narrative filmmaking was like. How did that pan out in reality? She marveled at what she now had at her disposal, and says that “the toys were much bigger.” And she really loved working with actors, calling directing them “magical.” She says, “In documentary, you can only shape performance in edit. One of the most beautiful tools you have [in narrative] is being able to work with an actor and craft a performance.”

She and Kate Mara became friends around the time of Blackfish, and Cowperthwaite seems to have adored getting to engage with her in a professional capacity. “Working with Kate was just a wonderful experience,” she says. “A very special experience. We have very similar creative sensibilities. We like the same types of movies, certain performances resonate with us. So, I think we just had a shorthand on set. We both didn’t want a saccharine movie. We both didn’t want cheesy stuff to come out. We wanted a very authentic, honest piece. I think that was very special, to be able to connect with your lead actress that way.”

She does, however, miss the spontaneity and the “adrenaline rush” of documentary film. Thankfully, working with a dog as one of her lead performers in this film allowed her to flex her doc muscles, as she required her crew to be light on their feet to ensure to be ready for the dog. Cowperthwaite remembers, “When that dog delivers gold, we better be rolling, because they’re not going to do second and third takes.”

“Honestly, I feel he was so good, and he’s got this emotive face and this big wolf body, and he’s so many things,” she remembers. “When he looks at you, it jars you. There’s something so deep…like he’s staring right through your soul. So, the responsibility was on us to be rolling, and to be able to capture that properly, because he was delivering left and right.”

Cowperthwaite delivers with Megan Leavey as well, giving us a war film from an askew angle that might change the way you think of our military and the women in it.

Megan Leavey is in theaters now.