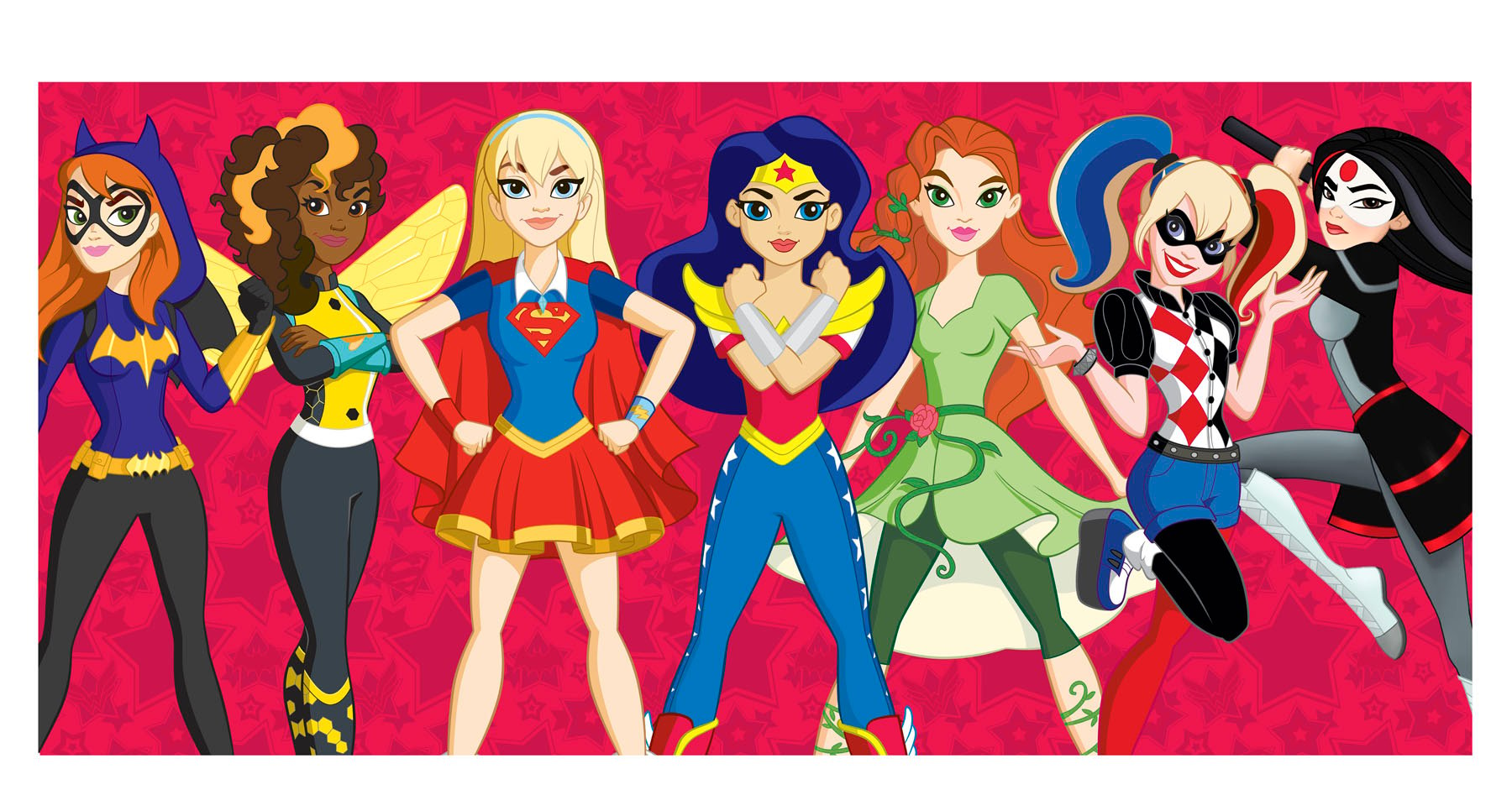 At New York Comic Con, I had the pleasure of interviewing several of the minds behind DC Super Hero Girls, which is: a TV show, a series of graphic novels, a book series, and a line of toys, all of which we’ve made no secret of feeling excited about here at The Mary Sue. Specifically, I spoke to Aria Moffly, DCE Creative Director, Shea Fontana, the DC Super Hero Girls graphic novel author, Lisa Yee, author of the Random House DC Super Hero Girls novel series, and Tania Missad, Mattel’s Director of Consumer Insights. They each had fascinating insights to share about the characters featured in this new alternate universe, from page to screen to action figure.

Maddy Myers (TMS): Since the show’s aimed at ages 6-12, how did that change the narrative direction of the show, in comparison to something like Teen Titans or Young Justice? There’s more violence and more dangerous stuff happening to the kids on those shows, but this show — well, I defer to you about whether that’s changed!

Aria Moffly: There will definitely be danger! [laughs] But there will also be comedy, and there will also be — we really wanted to take an optimistic look at these girls. So it is slightly tonally different than anything else out there. But it’s probably a big combination of a lot of things that you’ve seen before.

TMS: Can you give an example of an influence?

Moffly: If you mashed up Batman: The Animated Series with Teen Titans Go — or maybe Supergirl the TV show? That’s kind of tonally what we’re talking about. It really is a new territory.

TMS: So there are still life-threatening situations —

Moffly: The storyline for [Shea Fontana’s] graphic novel is a good example. I mean, Lex Luthor —

Shea Fontana: Yeah, there’s definitely a lot of action. I think because this is an umbrella brand for a lot of different outlets, and some of the animated shorts get much more comedy, whereas the direct-to-DVD movie is much more action-driven — and the graphic novel also has been very very action-focused and much more serious than a lot of our comedy shorts.

TMS: So, would the graphic novel skew a little older in terms of who might be reading it? Not 6-year-olds?

Fontana: [laughs] Yes. I think within the brand, there’s something for every age range. I’ve only written for kids, really — I’ve only written animation, and I always feel like it’s also for me, so I don’t — I’m not thinking, “Oh, I’m writing for a 6-year-old here.” I’m just writing something fun that I’d like to watch.

TMS: So, speaking of age groups, obviously the main thing any DC fan will notice about this show is that you have characters who we know are teenagers canonically like Beast Boy, and Supergirl sometimes, and then we have these characters who are adults like Catwoman and Poison Ivy. And all of a sudden they’re teenagers as well!

TMS: It seems like you picked the best female characters from each age and then just put them all in high school.

Lisa Yee: Yeah! They are from different ages. And they are all together. The wonderful thing about it is, we now get to create these stories that didn’t exist before. What if? So much of this is, what if? You put them in high school — which is a painful place sometimes. So, these characters, these girls — they don’t have their full powers yet. They’re still figuring it out. They don’t know if they’re going to be good or bad or what’s going to happen to them. We kind of know. But this is the reason why. With the books, I get to flesh it out, get into character development, maybe see that — if you know this is going to happen to a person, maybe this is why it happened. The opportunity that we have with this world of DC is amazing. And we get to play!

TMS: Since we already know that some of the characters will turn out to be villains later —

Yee: [gasps] You’ve just ruined it for me!

TMS: But taken in contrast with the show like Gotham, where they’re really trying to stay within a particular canon on that show — you really know that the villains are going to turn out to be villains. But since you’re starting over with this alternate reality, is it perhaps possible that some of these characters will not turn out to be villains, within this world?

Fontana: Absolutely. Within the animation that we’re doing, characters that classically villainous like Harley and Poison Ivy are doing heroic things. It’s a high school world where people still haven’t totally gotten their identities that they may have ten years from now, and it’s where they’re exploring maybe their good side — and with someone like Harley, maybe you get glimpses of their little mischievous side as well. 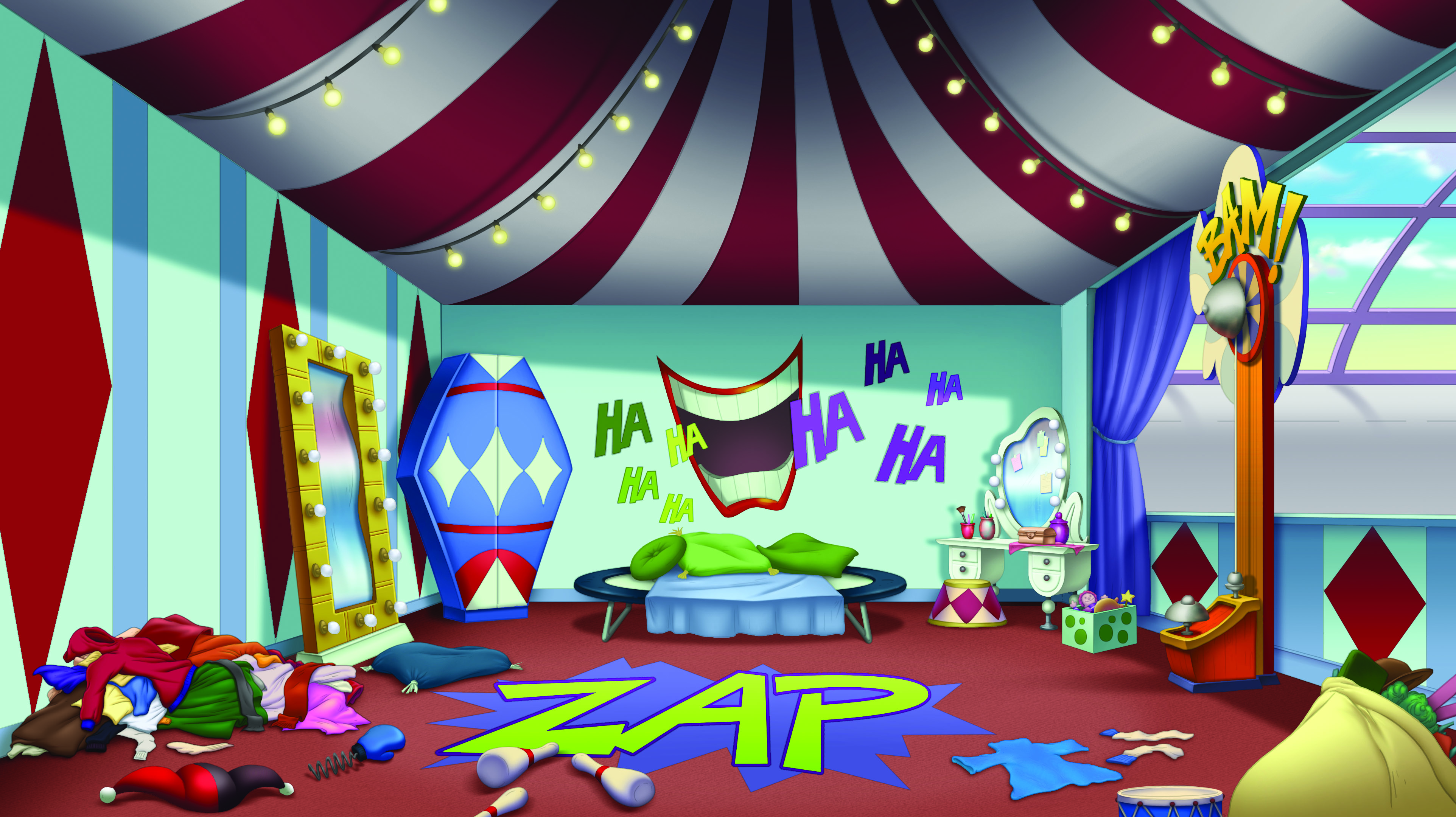 Moffly: One of the tenants of the campaign is, “Heroes are made, not born.” So, that’s why we wanted to take a look at our characters, who all have the potential to be good or bad — it’s the choices that you make that are going to determine your fate.

TMS: Right. So, still in this same vein — one of the hints we have is that Lex Luthor is a teenage villain on the show. Whereas in Young Justice, and shows like Powerpuff Girls, a lot of times the girls will fight adult villains, and it’s played for comedy that these young characters will be fighting adults who are serious villains. What was your thinking there, to have a teenage boy who is already villainous? That’s pretty dark!

Moffly: We definitely have both things going on. The Lex Luthor story is one story that we’ve done, but there are definitely a lot of adult villains, and then there are teenage villains as well.

TMS: So there’s teenagers who are really villainous —

Moffly: Well, they’re fairly villainous. Also, [Lex Luthor] is out of high school — I don’t know if that’s a spoiler?

Yee: If you think about it, high school is a microcosm of the wider world. And there is — all of this kind of stuff is going on right now, with the intrigue and the mystery and the back-stabbing —

TMS: There are real villainous high-schoolers!

Yee: Yeah! I mean, totally! So, we’re taking that world, and we’re adding to it with these superheroes. We’re enriching it. Everything is ratcheted up.

TMS: The stakes are higher.

Yee: Because people could die!

TMS: I only have time for a couple more questions, so I’d like to talk about the toy design a little bit. I noticed in the marketing, there’s some use of the word “action figure” and some use of the word “doll.” I had action figures growing up, and I had dolls, and I just — obviously I knew that action figures were “for boys,” and we all know that’s crap — [Everyone laughs] But I wondered how you navigated that space, in terms of marketing and designing the dolls?

Tania Missad: We actually talked to parents a bit — moms and girls — about what they wanted. We actually started by calling them “action dolls,” and a lot of the parents said, “why call them dolls? They’re really just figures.” They’re just a little bit more relevant for a 6-12 year old girl. But they’re figures, like my boy would play with — and hopefully boys and girls will play with the figures together. So, these were just created, looking at little girls — 6-9 and 6-12 year old girls — what they really wanted out of an action figure, versus potentially some of the stuff that’s created for boys 6-12.

TMS: So you are hoping that boys will be interested in the toys as well?

Missad: Absolutely. The way that we’ve designed it is so that boys will be as interested in it as girls. The way that boys and girls play with figures — we did a lot of research on this — was very similar. They wanted similar types of powers, similar types of play patterns. Girls just wanted to identify with it and relate to it in a more specific way. Those are the tweaks that we made to make it more relatable to a girl.

TMS: That’s really cool. I’ll just end with a broader question about the idea of making a DC superhero show that has “Girls” in the title, and is explicitly about girl characters — did you face any resistance to that?

Moffly: We actually did not face any resistance at all!

Moffly: I think everybody really embraced the idea and was really excited about the opportunity, because it hasn’t really been done before on this scale. Everybody was excited!

Yee: The time is right.

TMS: Absolutely. I mean, it’s been right before now … [Everyone laughs]

Yee: But it’s really right now. And if we don’t do it now, it’s overdue!