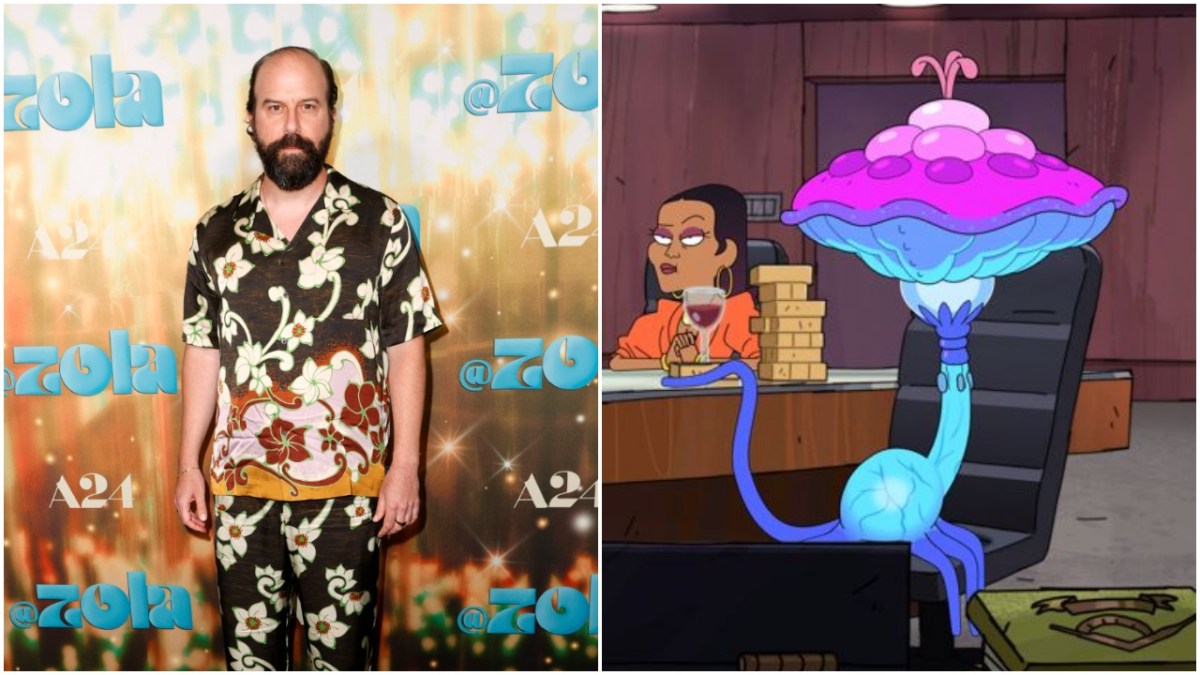 Netflix’s latest foray into adult animation, Inside Job, premieres this week with an all-star comedy cast. The series, which hails from the mind of Shion Takeuchi (Gravity Falls), is an adult animated workplace comedy that takes place at Cognito, Inc., a shadow government organization that creates and manages global conspiracies: everything from Illuminati-style secret societies to Bigfoot to lizard people to chemtrails gets namechecked in the trailer.

The team is led by “anti-social tech genius” Reagan Ridley (Lizzy Caplan) who tries to manage her misfit team which includes psychic sentient mushroom Magic Myc, voiced by actor and comedian Brett Gelman. Gelman has made a name for himself playing intense, acerbic characters like Claire’s (Sian Clifford) toxic husband Martin in Fleabag and a conspiracy theorist/private investigator Murray Bauman in Stranger Things.

We sat down with Gelman to discuss his new series, favorite conspiracy theories, and why women of color should do whatever the hell they want.

THE MARY SUE: Growing up, conspiracy theories were often a source of humor, met with tin foil hat jokes and all that. But nowadays, we’re confronted with the more insidious aspects of them, such as their proliferation on social media and the mainstreaming of dangerous theories like QAnon. Do you think its harder to find humor in the subject in our current climate?

BRETT GELMAN: You know, I don’t think so, … I’m somebody who believes it’s very healing to laugh at like, horrible things that are going on, as long as you’re not disrespecting the people who are being affected by them. But I’ve even found that, yeah, I didn’t think anything [on the series] was really exploitive. Plus you know, Shion [Takeuchi] is a very sensitive and intelligent person, so that when she really goes for the edgy joke, it is backed up with so much good intention and intelligence that it works, you know?

Also, she’s a woman of color – she gets to do what she wants, and she should! I mean really, I think that’s a lot of the answer too, who is running these shows. And when you have a woman of color running the show, it’s like, you’re given more of a leeway to do that, because she has been affected by the dark side of the United States you know, so being a voice-piece for her vision is really great.

TMS: It’s a perspective that punches up, that isn’t bullying. I like that there’s a supportive vibe at the core of the show. Do you have a favorite conspiracy theory?

BG: I’m pretty basic, I mean, when I was a teenager and Oliver Stone’s JFK came out, I was just so into everything surrounding that, it was just so fascinating to me. I loved that movie and I loved how paranoid it was, … you felt like the people behind it were right outside your door. But then Area 51 and all of the alien theory stuff really freaked me out too.

Conspiracy theories, if I think that they’re true, and those two I do, they’re really scary, so I’m pretty emotionally connected less in terms of like ‘that’s awesome’, more like, ‘hope that doesn’t kill me!’ They freak me out, and what’s so amazing is to be thinking about these people reading these fake conspiracy theories and believing them to be true, they’re really having some bad days! As bad as they’re making our days, their days are pretty bad if they’re believing some of that crazy shit. Because conspiracy theories are stressful, and I think one of the great things about the show is that it takes the stress out of it by laughing at how ridiculous it is.

TMS: What would you like to see happen with Myc in season 2?

BG: I’d love to see Myc in a romantic relationship, that would be fantastic. It’d be amazing if like, he became the central part of some sort of actual QAnon conspiracy, just to have Myc be at the center of that would be really fun.

TMS: You also play a conspiracy theorist in Stranger Things, can you tell us anything about season 4?</strong

BG: I can’t! I can’t say more than what has already been revealed.

Inside Job premieres on October 22 on Netflix.