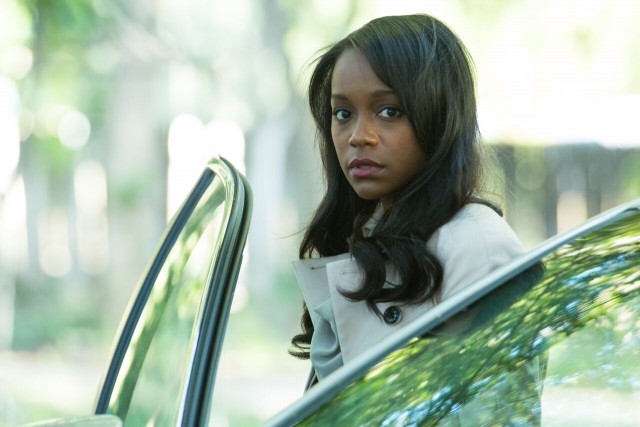 You may know her as overachieving law student (and accessory to murder!) Michaela on the Shonda Rhimes hit, How to Get Away With Murder, on ABC, but Aja Naomi King should now also be on your geek radar thanks to her new sci-fi film, Reversion, which opens today in select theaters.

REVERSION centers on Sophie Clé (Aja Naomi King), a delighted user of the Oubli, a wisp of high tech jewelry that wraps behind the ear and uses neuroscience to help its users experience their most joyful memories as if they were happening for the first time. In addition to being the head of marketing for the company that makes this revolutionary memory enhancing wearable device, she is also the daughter of its inventor, Jack Clé (Colm Feore). Sophie’s most joyful memory is the last day she saw her mother alive, fifteen years earlier. But on the eve of the Oubli’s worldwide launch, a stranger named Isa (Jeanette Samano)kidnaps Sophie, setting off a chain of events that remind us all, you can’t escape what you can’t forget.

The film is worthwhile not only as an intriguing piece of sci-fi, but because of its diverse cast and crew telling a female-centric story. In an exclusive interview with The Mary Sue, Reversion star, Aja Naomi King, talks about the film, her phone addiction, and what it means to her to bring diversity to storytelling. 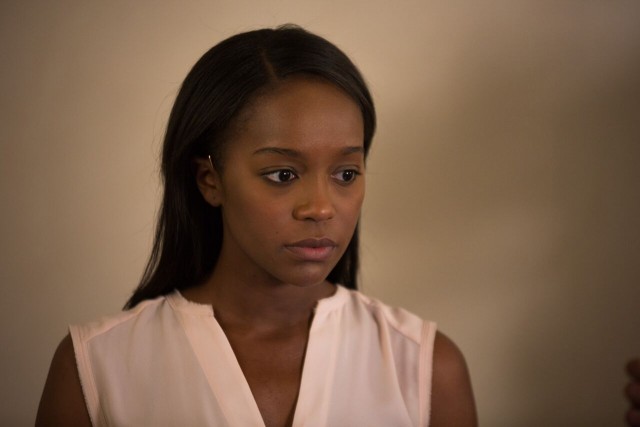 Teresa Jusino (TMS): How did you come to be involved with this film, and what drew you to this role?

Aja Naomi King: When I read the script, what I loved about it actually is that I thought to myself that the choice my character makes at the end…I would make that exact same choice. Because I think we have this innate desire to protect ourselves from guilt, or blame. Do you ever think back to an incident with someone and you’re like, Hmmm, no—I didn’t do that. [laughs] We always wanna make ourselves our own heroes, really. so, I was very intrigued by that idea of someone who can’t exactly remember, and it’s her own mind protecting her from the truth, because innately, she knows she wouldn’t be able to handle it.

TMS: What purpose do you think bad memories serve?

King: Well, a very important purpose, really. I think of it like this: if everything we ever remembered were only happy thoughts, that would be our baseline. Happiness would be our baseline, which eradicates happiness, because without the bad, we don’t know what good feels like. We need joy, and fear, and all these uncomfortable, complicated emotions so that we can distinguish them from the next. I think that’s what’s so interesting about [Sophie]. Here’s this very privileged woman who is on the brink of launching this really great technology with her father, but there’s something missing.

She’s not complete. She’s addicted to her own technology, because the only thing that gives her any semblance of wholeness is being able to relive her last memory of her mother, which is really great, but the other things—the bad memories—those are the memories that shape us as human beings, and teach us what not to do, and how to really protect ourselves from bad relationships, or instances where we put ourselves in danger, or others in danger, or acted in a way we didn’t like—the times when we are guilty of doing something not incredibly kind helps us, I think, to be kinder in the future—to be able to remember that. So, when you take that away, what kind of person do you become, and can you really experience happiness anyway? 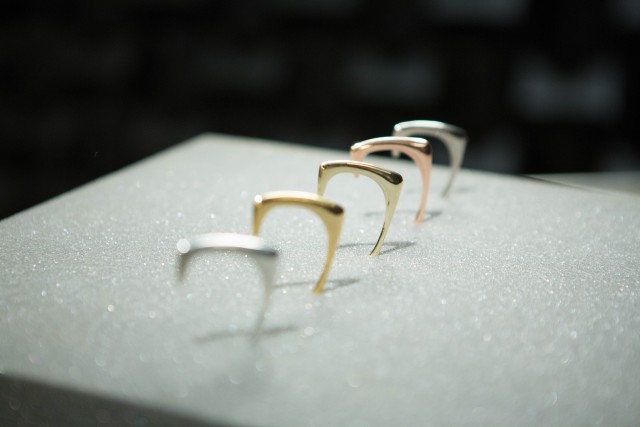 TMS: And Sophie’s like a drug addict. She’s addicted to her own happiness…

King: Aren’t we all addicted to technology already… [indicates her smartphone and my smartphone, which is recording the interview—laughs] Funny enough, when we were shooting one day, we were on location. Now, my character wears a lot of heels, so I popped over to The Grove before going to the shoot. I just wanted to get some Uggs, to have something comfortable to change into, right? So, I get back in my car and start driving, and I realize…I don’t have my phone. I left it somewhere at The Grove. And if I go back…I’m going to be late. I’m gonna be late to work, there’s no way around it. And I thought, Do I go to work, or do I get my phone?

Now, we don’t memorize phone numbers anymore, because they’re all in our phone. [laughs] We are so reliant on this technology. And that’s what I loved about this script. That this was something so tangible that I could relate to. The way I’m addicted to my phone, she’s addicted to [the Oubli]. 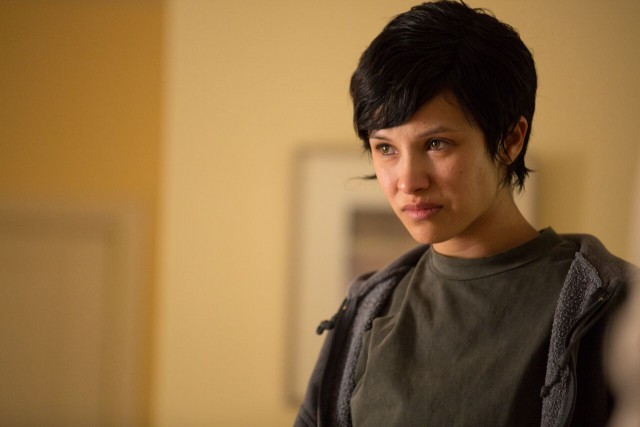 TMS: What’s the takeaway from Reversion? What do you hope people go away with after seeing this film? Because I’m still not sure how I feel about the ending!

King: It’s very complicated, and that’s what I like about it. Like I said, when I read the ending, I said that I would make that same choice. I think there is a part of that that’s like, How do we move our lives forward after a traumatic event? Is it better to remember? Is it better to forget? How important are our memories? Maybe what makes our memories feel so special now is that we don’t remember them exactly how they happened in the first place. And so, for me, the takeaway is really a bunch of questions: to question our addiction to technology. To question nostalgia. Nostalgia’s kind of a dangerous thing, in a way.

TMS: What kind of pop culture are you into?

King: I love watching TV. I feel like I’m one of those people that watches just about everything. I was obsessed with Mr. Robot this summer…

TMS: Everybody’s been recommending that to me.

King: Oh! WATCH. IT. WATCH. IT. I mean, the actors are so good, but the way it’s shot… Sam Esmail, he’s the creator of the show, and the camera work, the music….ugh! It’s just. It’s so good. Check it out. Episode Six is my favorite. “Brave Traveller.” [laughs]

TMS: One of the reasons why we were excited about this film is that there are so many people of color involved. A Latino writer/director, you’re in it, other characters of color all over the place. And what struck me is that the first twenty minutes, I’m enjoying it and getting into it, and then it dawns on me: I’m watching a black woman be the lead in a sci-fi film! And why am I noticing this? And why is this such a novelty to me? It should be normal, but it’s not.

King: There are so many things that should be normal, but they’re not—yet. But we’re getting there. Slowly—but we’re getting there. It was very exciting for me to lead a film. And I love it when I see film and television where they really hold up a mirror to reality, and it’s like Yeah, I recognize this world, because this is what I see every day. A bunch of different people, different colors…I live for that. It gives me life. 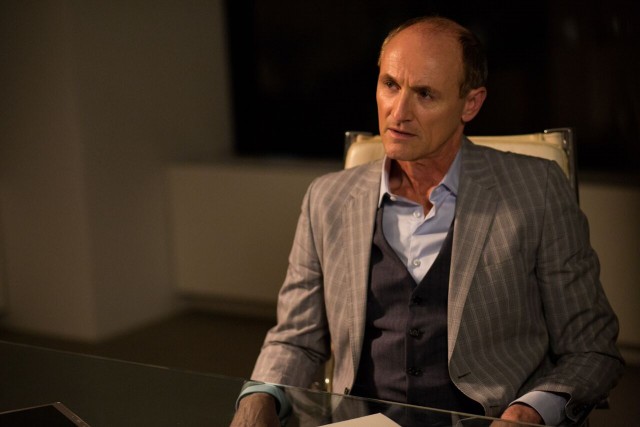 TMS: And Colm Feore, who’s an amazing actor, played your dad—and I was sitting there going, OK, well then clearly her mom must be black, which she was…and that’s a thing that happens. You don’t have to have a family that’s perfectly one color or the other…

King: Exactly! It’s unnecessary. Especially in today’s world. Even if both my parents in this film were Asian or something, that is entirely plausible!

TMS: Yes! There are a million possible explanations for that.

King: So, when I look at it, I don’t even question it. I see a father and a daughter…with a very strained relationship.

TMS: Seriously. Their races and ethnicities are the least of their problems.

King: Yeah, it’s not at all what you focus on. And also, for me, it’s great to be a black woman leading a film where the story has nothing to do with my race. 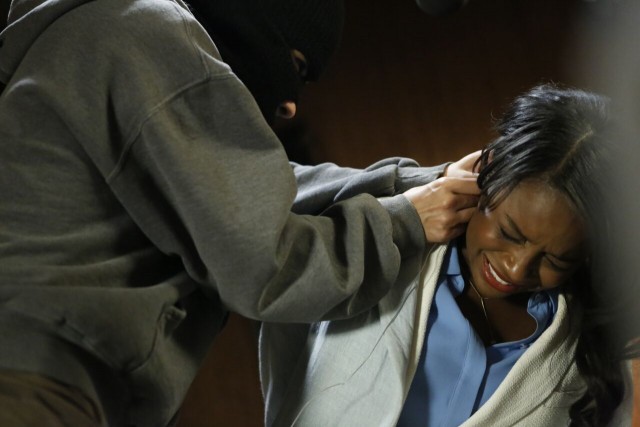 TMS: So, this movie was a revelation to me because of the way it handles race and gender, and you’re also on How to Get Away with Murder—along with Viola Davis who just made history—which is also a really diverse show. What does it mean to you to bring these different perspectives—the female perspective, the perspectives of different people of color—to storytelling?

King: For me personally…you don’t believe it’s possible until you see it. Seeing Viola play this character. Seeing her win the Emmy. And then myself being cast alongside her; another dark-skinned black woman. That in itself is a bit of a novelty in television. Normally you get the “one of each” thing. But on our show, you look around and it’s like, There are a lot of dark-skinned black people on this show. [laughs] It’s amazing, because it makes you feel like there’s a place for you, that you belong somewhere. I belong somewhere. I fit in here.

And the character I play [on HTGAWM], I love her because she’s this intelligent, confident woman. The only difference between her and Sophie is that Sophie is someone who was born with all the privilege and conveniences of life, while Michaela had to fight to get to where she is, so she knows she deserves to be there, and she’ll knock you out if you try to tell her that she doesn’t! But it’s so great to play women who are so confident, who really believe in themselves, who know that they are capable. And I love having that as an example out there for other young women in the world. I can’t tell you the number of tweets I get saying I wanna go to law school. And I’m like great. Go! Don’t kill anyone. [laughs]

TMS: Yeah! ‘Cause Annalise [Davis’ character on HTGAWM] is great…but she’s not the best role model.

King: But that’s what’s great about Annalise. She can not be a great role model. She’s a complicated character. She’s not one-dimensional. She’s so many things rolled into one. She’s human.

TMS: That really is great. Because what often happens when some writers create female protagonists, or protagonists of color, there’s a tendency to make them Perfect. Meanwhile, Walter White on Breaking Bad can be Jerkface McGee the whole show, and it’s fine.

King: Yeah, this whole idea of being a “likable character…” no! In life, we can’t always be likable, because people don’t always respond to likability. Sometimes you have to be forceful, and put your foot down, and get what you need. We should be telling all people—men and women alike—to live that way. Your life can’t be about pleasing others.

Check out the trailer for Reversion below, then check out the film in New York, Los Angeles, and Chicago in select theaters starting today! You can also check out last year’s prequel film, Isa, which follows the Jeanette Samano character from Reversion and aired on Syfy!