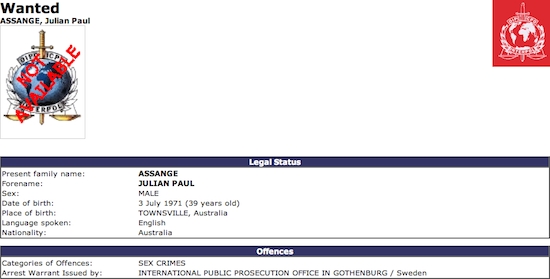 Just days after Julian Assange-led whistleblower organization WikiLeaks released an unprecedented number of confidential US embassy cables, causing a geopolitical dustup and charges of treason from the American right, international police group Interpol has issued a so-called “red notice” on Assange in connection with the rape charges brought against him in Sweden, closed, and later reopened earlier this year.

A red notice is not an international arrest warrant, but rather an order allowing national warrants like those issued by Sweden “to be circulated worldwide with the request that the wanted person be arrested with a view to extradition,” in Interpol’s words.

Assange’s lawyer alleges that the timing of this seems mighty suspicious:

Media lawyer Mark Stephens says Assange and his attorneys have not been provided with any information beyond what has been reported in the press about the sexual misconduct case against him in Sweden.

He says Assange has repeatedly sought meetings with Swedish prosecutor Marianne Ny. Stephens said Wednesday that it was bizarre that Ny sought an arrest warrant after having ignored or rejected Assange’s offers of voluntary cooperation.

Stephens said that this appears to be “a persecution and not a prosecution.”

“Despite his right to silence, my client has repeatedly offered to be interviewed, first in Sweden, and then in the U.K. (including at the Swedish Embassy), either in person or by telephone, video conferencing or e-mail and he has also offered to make a sworn statement on affidavit,” according to Stephens.

“All of these offers have been flatly refused by a prosecutor who is abusing her powers by insisting that he return to Sweden at his own expense to be subjected to another media circus that she will orchestrate,” Stephens wrote.