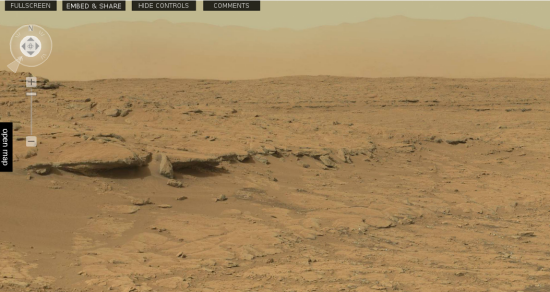 You’re not on the surface of Mars right now, but that doesn’t mean you can’t feel like you are. Try playing around inside this interactive 360-degree panorama image of the surface of Mars. You’ll feel like the Curiosity rover is your special little Mars buddy and the two of you are on an adventure.

The panorama was put together by photographer Andrew Bodrov, and we found out about it from the Curiosity rover itself on the lovable robot’s Twitter account:

Take some time to explore the Martian landscape, and don’t forget to look down for some amazing high-resolution looks at the rover itself. The rover images are chopped together in a weird Picasso kind of way, but they’re still very much worth giving a look — so is Picasso’s work for that matter.

Enjoy playing Martian spaceman (or spacewoman). I’m going to play Doctor Who, and I’m making Curiosity be my K-9. Affirmative!