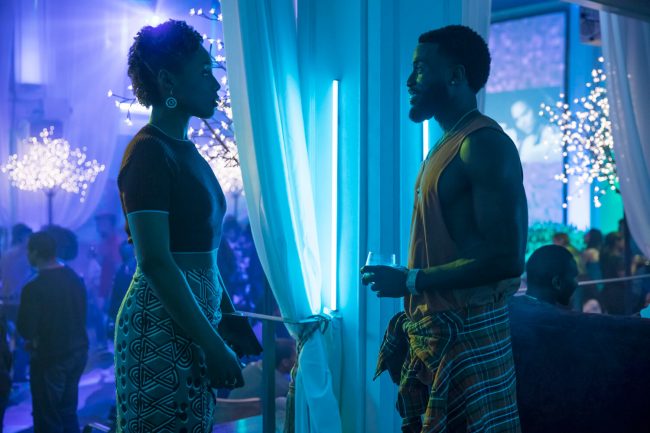 This season of Insecure has been diving head-on into exploring the many ways in which sex fits into the lives of single people. With every main character on the show now being single, their relationships with sex are varied, unapologetic, and messy. In the most recent episode (spoilers), we saw Issa dealing with the self-esteem whiplash that can come from confidence-boosting one night stands and truly despicable Tinder dudes; Molly tries to wrap her mind around the existence of open marriages; and Lawrence, fresh off a rebound, finds himself being objectified and fetishized by a white woman and Asian woman who treat sex with black men as some sort of sport.

In a season that in large part revolves around the emotional sides of casual sex, more than a few viewers have been feeling that the show has been irresponsible in its silence on issues of keeping that sex safe. Showrunner Prentice Penny (who also directed this week’s stellar episode) doesn’t seem to get the concern.

I really hope people can watch #InsecureHBO without asking if they use condoms. In the writers room we always assume they do.

Or assume the actors are responsible like most people are in real life.

Fair. But honestly I'm amazed at people thinking the opposite. We are just editing to get to emotional beats not to be misleading

We are not a PSA, documentary, non profit organization. I'm done discussing this.

On the one hand, I totally understand why Penny might be surprised by this criticism. Especially considering how few other shows have ever been made to explain the precautions their characters take.

I've never heard anyone mention condoms on screen on any show.

It works like this for every single show. As someone pointed out, fans of Girls weren’t playing the moral police on them. So why on you? https://t.co/TOCjnOhM0C

It’s completely unreasonable to make one show, where the burden of race is undeniable, accountable for this entire conversation. But in an episode specifically about, among other things, casual sex, it seems obvious that sexual safety would be a concern. Especially when the threesome depicted in the episode seemed to contain some seriously unsafe practices. Studies have indicated that black Americans use condoms more often than whites, but condom use in general, among all demographics, is still upsettingly low and STIs still rampage through all communities. Television shows don’t have to be a “PSA” or “documentary,” but it seems naive to think that what they put on screen doesn’t get noticed or internalized by viewers.

You don’t need to have a whole scene dedicated to condoms/Plan B/googling the science of pre-cum a la Master of None, but is it really that hard to show a condom being ripped open or clearly displaying them next to those beers Lawrence was buying at Bristol Farms? Surely that can be done without disrupting the “emotional beats.” This episode did such incredible work exploring all the messy emotional nuances of the sex lives of single people. Shouldn’t the physical precautions at least be mentioned?

For her part, Issa Rae pointed out that they are mentioned, if silently. But it sounds like she hears a good number of fans saying that they’d like a little more than that, and she addressed those concerns directly and graciously.

We tend to place condoms in the backgrounds of scenes or imply them. But we hear you guys and will do better next season. #InsecureHBO pic.twitter.com/q9quKK3ZB8

Whatever side you come down on here–whether you think the viewers demanding more acknowledgement of safe sex practices are valid or unreasonable–conversations about responsible sex are always welcome.