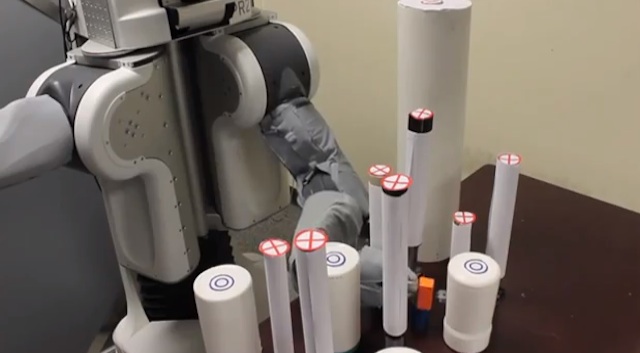 Georgia Tech researchers have taken one big step towards building a robot will be able to get that jar of mustard from the back of the refrigerator without making an ungodly mess of the place. They’ve developed a “skin” that gives tactile sensitivity to a robot’s whole arm, allowing it to snake its way through obstacles and pick up objects that in the midst of a cluttered environment without disturbing the items surrounding it.

The “skin” is a fabric that can be stretched along the arm of the robot and contains a number of tactile sensors that let the robot know where its arm is. That allows the robot to keep moving towards its goal without the rest of its arm sending debris scattering.

Though it might seem like a small thing, giving robots the ability to reach through clutter to grab an item is a pretty key one. A robot working with nursing home patients, for example, may find it needs to navigate a cluttered desk to acquire a pill bottle. The new technology could even make it possible for robots to take over menial tasks like pruning bushes and shrubs, though the day we bring in robots to do our gardening on the regular probably remains rather far off.

The science behind Georgia Tech’s robot arm is published in this month’s issue of the International Journal of Robotics Research. On the off chance that you’re not a subscriber, you can get a look at the arm in action as it navigates obstacles in the video below