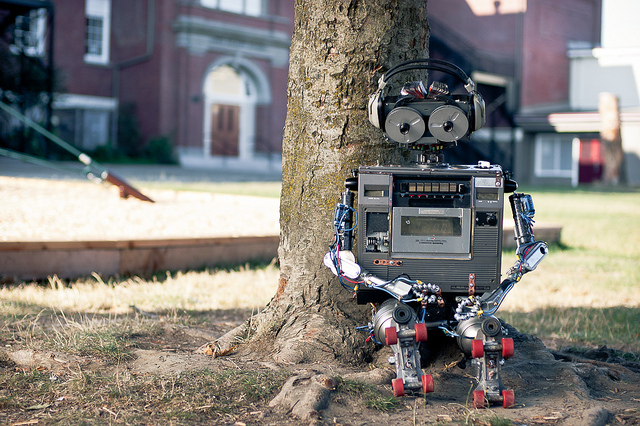 Robots may not have the capacity to care about us  yet, but that won’t stop humans from feeling unrequited love for their android buddies. While it may seem obvious to those of us who have harbored a mad Data crush at one point or another, a new study seems to confirm that humans harbor a great deal of empathy for their robotic brethren, reacting to affection towards — or violence against — them in the same way they react to these things in humans.

The paper, scheduled to be presented this summer at the 63rd Annual International Communication Association Conference, combines the results of two small studies. In one, participants were shown video of a small, dinosaur-inspired robot being either shown affection or abused, and given a survey about their emotional frame of mind immediately afterwards. In the next, participants were monitored with an fMRI machine that took stock of their brain activity while watching videos of humans, robots, and inanimate objects being treated affectionately, as well as abused.

The results suggest that most of us react similarly to someone hugging a robot as we do when we see someone hugging a baby — that is to say, it gives us a case of the warm fuzzies. Again, that result seems pretty standard to this reporter, because let’s face it, folks: on average, robots are waaaaay cuter than babies. Significantly less messy, too.

The study also shows that humans feel negatively when they see robots being hurt, though the fMRI results suggest that their empathetic reaction to the robot abuse is not as strong as it is when we see a human being hassled. That dovetails with earlier research, including a 2008 reproduction of the infamous Milgram experiment, in which humans were put to work torturing a robot with electric shocks, and every person involved followed researchers instructions to administer a “lethal” shock to the robot, which was programmed to beg for mercy.

So while we may empathize with robots, we don’t fully consider them worthy of not being tortured to death. Making a robot that does inspire our empathy is one of the current goals of many robotic engineers, as more relatable robots will be more useful in places like hospitals, where robots could start seeing a lot of use in the not-too-distant future.