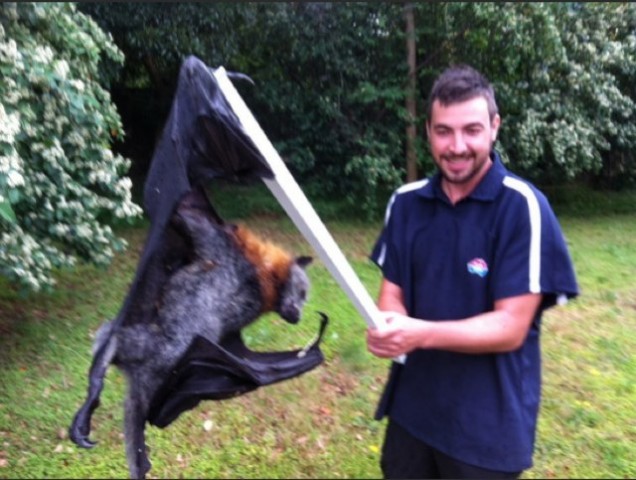 Look, we know the whole “nature-you-scary” angle is played out, but you guys: Look. At. This. Australian. Bat. He is the size of Batkid. He could be a bat on which Batkid rides to the scene of crimes. He could be a Batkidmobile, but he will never be, because this freaking enormous bat is now dead.

Redditor treemonkey18 posted this lovely image yesterday with the caption “My friend woke up to this thing fighting his dogs (Yes I’m from Australia).” Points, Mr.treemonkey, for acknowledging that your homeland is populated by creatures non-Australians see in their nightmares, not their backyards.

Reddit commenters not insinuating that the specimen is a winged goblin and/or Batman himself have wisely pointed out that the size of the bat may have been enhanced using photoshop or a forced perspective angle.

Several commenters have also suggested that the specimen could be a Flying Fox fruit bat—a “megabat” that can grow to a wingspan of almost 5 feet.

Oh, okay. I’m just going to sit here and quietly process how that can be real.

If the picture isn’t fake, it’s unclear whether the bat was killed in battle with the dogs or by a protective human. If it is a giant fruit bat, it seems unlikely to me (though I’m not an Australian bat expert) that the bat was the aggressor.

If that’s the case, I’m sure the megabat’s brethren are darkening the skies of Australia as we blog, using sonar to seek revenge for their fallen comrade.

I’ve never been so happy I’m not a fruit salad.