*Knock knock.* Do you want to build an ansible? 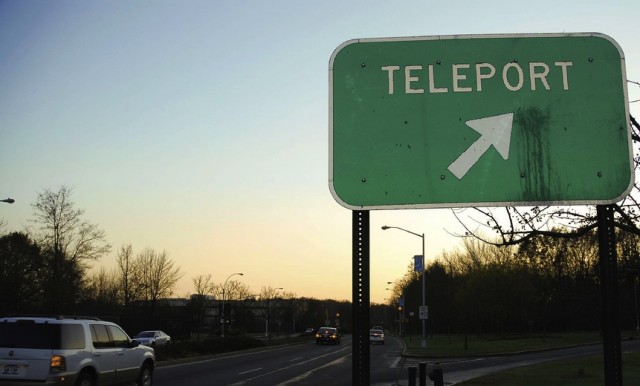 Even if we may never be able to teleport a human being, teleporting information using particles affected by quantum entanglement is a very real possibility with a huge amount of practical applications. That’s why it’s so exciting that a research team has finally found a way to use entanglement to transmit data with full accuracy.

According to their paper published in Science, a research team at Delft University in the Netherlands has solved the problem of extremely fickle quantum bits (qubits). Data can be teleported using qubits due to the fact that, when they’re created so that their quantum states depend on each other, they react to state changes as though they’re part of one system—no matter how far apart they are.

So, the data isn’t actually moving from one place to another, but its effect can be observed simultaneously in two places, which makes the instantaneous exchange of data possible.

Think of it like 1990’s They Came From Outer Space, which is on Hulu and just as bad as you (probably don’t) remember. Whatever happened to one affected the other, no matter how far apart they were. The show isn’t exactly how entanglement works—in quantum entanglement, both qubits react to the change to balance their little quantum system, while in They Came From Outer Space, only one felt the change, and there was a lot more gross sexism and bad `90s everything involved, but you get the idea.

However, until now, the entanglement information exchange has been as inherently flawed as Abe and Bo. So, the Delft team used diamonds chilled to very low temperatures as molecular prisons for electrons, and then shot the electrons with lasers to create qubits that could reliably transmit information back and forth. Their paper states that the information exchange worked with complete accuracy at a distance of 3 meters, but they should be able to scale it up easily, and their next round of tests will send information instantly over a distance of 1,300 meters.

This could pave the way for a lot of great things, like quantum computers, networks, or a way to instantaneously send information to other planets instead of waiting for signals that only travel at the speed of light like it’s the dark ages. Then when we’re old, we can talk about how instant gratification was a lot less instant in our day.

(via Phys.org, image via mercurialn)