The Super Bowl gave us eagles fighting patriots like a dystopian vision of the America we’re headed towards, but it also gave us so much more: actual new glimpses of Infinity War—life-giving trickles of superhero-infused water in our vast desert of what we actually know about Infinity War.

Listen, I am just a humble Infinity War farmer, trying to grow my crops and stay alive until May 4th. It’s not easy. The first and so far last full trailer came out on November 29th, which was in another year entirely, and in Trump years several centuries ago. Since then, I’ve been subsisting on a diet of wild plot speculation from toy leaks, tidbits tossed from actors who seem thrilled that their contracts are up while I cry about their characters in an attempt to irrigate my fallow Infinity War fields, and Twitter emojis. It’s been a rough winter.

Many of us had hoped for another full trailer to drop during the eagles raking their mighty claws across the patriots event, but alas, it was not to be, likely because Disney wanted to focus attention on Solo: Ranger Solo Is Really a Much Cooler Title. But in order to tide us over, we were given some delicious scraps in the form of an Infinity War TV spot that actually showed our characters making different expressions than in the trailer, and sometimes in new places! This is like Christmas, if you got 1/8 of a present.

Anywho, now that I’ve watched this over and over again on a loop that stretches on actually past infinity, let’s talk about some of that new stuff:

Iron Man, Spider-Man, and Doctor Strange are not in Kansas anymore. It looks like they might be in outer space! Peter is about to totally freak out and I can’t say I blame him. It’s not every day that you’re in a Sherlock Holmes sandwich.

Wanda—recovering from an injury?—is working her magic on Vision in his human form, and I want to care but I do not. Their romance has seemed unearned and shoehorned in just because it’s comics canon, and Paul Bettany continues to be 46 years old and Elizabeth Olsen, 28.

Everything in this trailer is really darkly lit. What are the Guardians looking at? Maybe a light switch?

The Science Bros.—or Science Boyfriends, depending on your corner of fandom—are back together!!! Let’s hope they don’t build any more evil robots bent on destroying the earth through mind-bogglingly bad plots like lifting an entire capital city into the air.

My husband Thor has become a Starfleet captain and I’m so proud of him. His first officer looks like he might be a handful, though.

Marvel continues to try and sell us a bill of “Loki will be evil again” with this convincing villainous squint from accomplished stage actor Tom Hiddleston, but I’m not buying it, Marvel. 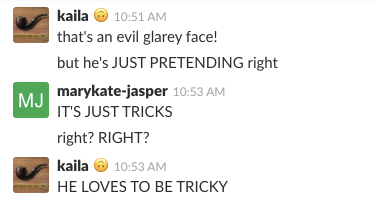 Fed up with the broken, always-delayed New York City subway system like the rest of us, Peter finds a faster way to travel.

Vision is just like “dammit, I didn’t get the roguish dark clothes and new coif memo, why am I always left out of memos, I know I am uncool, but just because I’m dating someone young enough to be my daughter doesn’t make me a dad”

My husband, Thor, calls out “Ready?” and he does it so well! Still proud of you, baby.

Have you ever seen two men and a vibranium gauntlet-shield so beautiful that you cried?

I’m calling it now: Thanos is ultimately destroyed when he barges into teenage Groot’s room without knocking.

James Buchanan Barnes has a new arm sans Soviet propaganda and like 70 years of major issues to work out so I’d definitely pick him first for my team in gym class.

To Sherlock Holmes they were always the aliens menacing the West Village.

We’ve already seen this a billion times, but isn’t it cool how Falcon kinda looks like a pterodactyl here? You can have that idea for free, Marvel.

That’s all I’ve got. What did you see here that I missed in my award-winning analysis?