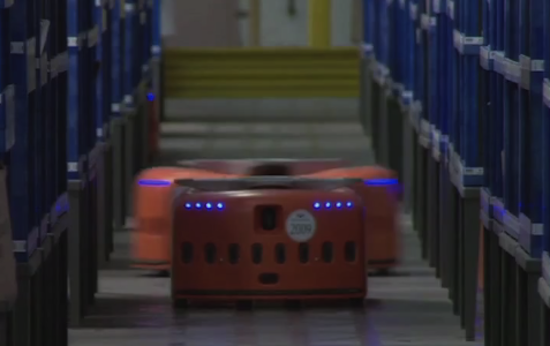 Yesterday afternoon, the robotic warehouse control company Kiva announced that it had been purchased by Amazon for a whopping $775 million. Kiva, for those unaware, sells a unique product that is surely near and dear to Amazon: Fully robotic warehouses. Though humans still have a place in a Kiva warehouse, the system’s ingenious top-to-bottom controls are surely of interest to Amazon, who has built its business on running a fast, cheap operation. But what exactly is Amazon getting with its latest acquisition?

Here’s how the Kiva system works:

It has three components: Small, wheeled retrieval robots; tall upright racks — which the company calls “pods;” and human workers. The whole system is designed to make warehouse stock mobile, meaning that humans simply interact with the stock as its brought to them.

Said workers, called a “pick workers,” stand in designated “pick areas.” Kiva robots roll in with racks of empty boxes on their pod, and line up in front of a special rack. As orders come in, the Kiva software assigns them a box, and indicates to the pick worker which box to place the items on. To get those items, Kiva robots bring pods of warehouse stock to the worker. Once they arrive, a laser pointer indicates which item the pick worker needs to take.

Once the worker retrieves the item, he or she scans it into the system, which then indicates which outgoing box to place it in. The worker does so, and confirms the placement on the box rack. As orders are completed, the robots whisk the filled boxes away to the shipping area. The flexibility of the Kiva system means that it can bring boxes to delivery bays as the workers are ready for them.

Out on the warehouse floor, everything is in motion. Kiva robots navigate to pods of products using a navigational grid on the floor, trying to drive under the standing racks as much as possible. This leaves “highways” between pods open for robots carrying pods, giving them fast and direct access to human pick workers. To pick up a pod, the small orange robots speed under the rack and rotate themselves extending a lifting pad corkscrew style. This gives the robot a wide, stable platform to carry the pods.

Ingeniously, the Kiva software system takes full advantage of a mobile warehouse stock by dynamically repositioning pods based on what remains on them. For instance, the Kiva software moves less popular or depleted pods away from the pick areas, bringing more active pods forward and allowing for faster fulfillment.

The entire upshot of the Kiva system is delivering customers — now Amazon — a highly efficient and low overhead warehouse and fulfillment system. Warehouses are, by their nature, enormous spaces, and enormous spaces generally mean high costs. Simply lighting the space and keeping it at a pleasant — or at least workable — temperature is not an insubstantial cost.

For example, Amazon spent $2.4 million installing air conditioners in four of its fulfillment centers after record temperatures caused over a dozen workers to collapse from the heat. In a Kiva warehouse, the pick areas could be placed separately from the stock area, meaning that only a tiny fraction of space would need to be kept habitable for human workers. Reporter Alexis Madrigal reports that Kiva warehouses can be kept dark, as the robots have no need for overhead lighting — another cost-cutting measure.

Existing workers in Amazon warehouses might see the adoption of Kiva as a good thing. As described above, it could mean more comfortable working conditions. Also, the system is designed to make being a pick worker as straightforward as possible.

However, a point that Kiva likes to play up in their promotional material is how little training is required to be a pick worker. Learning how to navigate a labyrinthine stock room, or even having the opportunity to learn forklift or other vehicle driving is effectively eliminated. This could mean that pick workers will end up being paid less, as the job requires fewer skills, and could also mean that they acquire fewer on-the-job skills.

Amazon’s purchase of Kiva is almost certainly all about overhead. Keeping costs low and developing an astonishing logistical system is part and parcel of how Amazon can offer 15% off the retail price for nearly all of its items. Any way to keep costs low increases Amazon’s profit margin, and might even mean savings for online shoppers.

Amazon’s purchase of Kiva might also mean that other companies won’t be able to benefit from robotic warehouses. Though other companies will surely emerge in the space left by Kiva, it is probably the most mature robotic logistics company out there with over ten years experience. Amazon now has that expertise in house. What this means for companies like the Gap that already use Kiva systems is, for now, a little unclear.

For most of us outside the world’s largest retailer, the assumption of Kiva will probably mean little — at least for now. For those already working within the bowels of Amazon’s enormous supply chain, this could be a game changer.