350,000 iBooks 2 Textbooks Downloaded in Three Days, But Does That Matter? 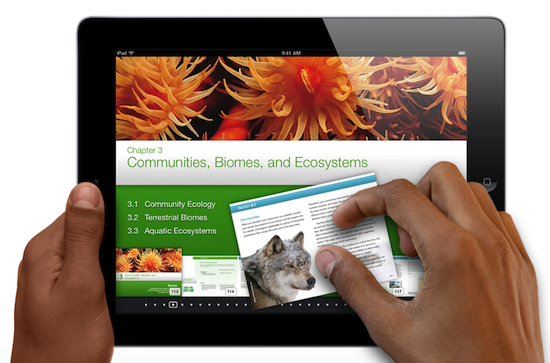 According to Global Equities Research, Apple’s outing into the textbook market with iBooks 2 seems to be off to a good start with some 350,000 textbook downloads in a mere three days. Add to that about 90,000 downloads of Apple’s free textbook creation tool Author, the amazingly low cost for producers and consumers of digital textbooks, and it would seem that education is finally ready to jump the digital divide. Or is it?

It’s hard to argue that 350,000 downloads in three days is a very good start, but those numbers are only telling part of the story. It’s important to keep in mind that, as of writing, there are still only eight textbooks available in iBooks 2. Furthermore, all of those textbooks are written for grades 7-12 and while I am perfectly willing to believe that some students either have their own iPads or can borrow their parent’s, I have a hard time believing that these downloaded books are in the hands of students.

An important point is that of these books, one of them is being given away for free. So, here’s my guess as to what these numbers mean: 350,000 curious teachers, tech writers, and parents downloaded the free book just to try it out. To see what all the fuss was about. If anything, the 90,000 downloads of Apple’s textbook authoring software is, perhaps, the most interesting figure, since it would seem to suggest that Apple’s catalog of textbooks could suddenly swell. That is, of course, if you can get past the troubling EULA.

In addition to their figures on the meteoric iBooks 2 downloads, GER also figures that the supply chain markup on textbooks is some 33% to 35%. Meaning, that in the process of going from the publisher to the bookbag, the cost of the book increases dramatically. Moreover, GER says that digital textbooks cost some 80% less to make than their print counterparts.

These numbers look like a win for consumers and a slam dunk for publishers, but it’s a little more complicated than that. Publishers will be selling these books directly to students, who will use them for only a year while schools typically keep and reuse textbooks for several years. That would mean an enormous victory for publishers. However, this assumes that students can find their textbooks in the iBooks store — which, given that there are only eight, seems unlikely.

Apple has done a remarkable job in setting the stage for their textbook assault. The math would seem to work in everyone’s favor, but until there’s a larger number of titles available, the current download figures are more like just nice numbers. However, I’m sure the publishers working with Apple will soon have their sales people equipped with iPads, showing teachers and schools what their students could be working with. Publishers in the highly lucrative, but also highly competitive, college textbook market will surely be watching for how the wind blows on these early high school deals. The stage is set for something big, but it’s not here yet.