Apple Announces iBooks 2 for the iPad | The Mary Sue 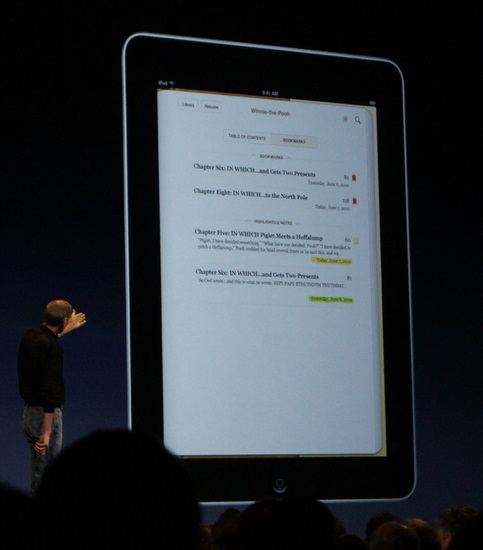 As part of an education event in New York City today, Apple announced iBooks 2 for the iPad which will attempt to use tablet technology to make textbooks better and more interesting. Naturally, iBooks isn’t going to be dealing with straight electronic representations of traditional several-pound, text-and-image textbooks. No, iBooks is all about the bells and whistles. Bells and whistles like 3D images, video, and multitouch gestures. No word on whether any of this actually makes reading for class fun.

A lot of Apple’s inspiration on this front seems to come from other third party apps that have been experimenting in the edutainment space; apps like Frog Dissection and Solar System. The new books are to be available in the iBookstore directly and come with more robust note-taking functionality, although what that actually means is still a little unclear.

Apple also announced a big score when it comes to content; they’ve snagged content partnerships with Houghton Mifflin, Pearson, and McGraw Hill, which, between the three of them, account for at least 90 percent of the textbook market. It’s worth mentioning, however, that these publishers have assembled a meager 8 iBooks so far.

There’s also some question about exactly how practical it is to get the still relatively expensive iPad into the hands of more students, but if rumors about the iPad 3’s immenent announcement are true, the obsolete iPad 2 should be getting a pricecut soon thereafter, making it a little more practical.

Most importantly, the increased usage of iBooks means that student’s wouldn’t have to carry around tons of heavy textbooks, robbing them of one the most popular student complaints. Speculation (by me) suggests that they’ll promptly start whining about something disgustingly trivial that will make former students around the globe wince and rant about their memories of the weight of textbooks. Thankfully, however, all memory of “books” will fade in the coming years, making said rants sound positively alien to children, decreasing their frequency overall, at least among those who have not, in the meantime, gone stark, raving mad from jealousy.