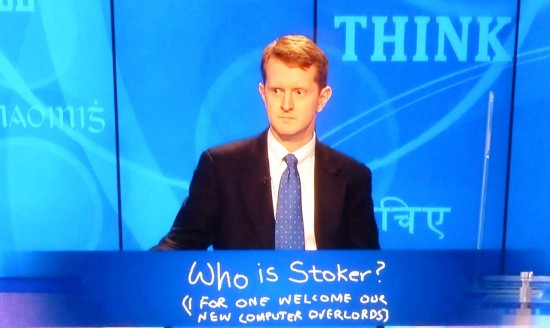 Last night, IBM’s Watson was crowned Jeopardy!‘s first supercomputer champion, scoring $77,147 to Ken Jennings‘ $24,000 and Brad Rutter‘s $21,600. On his Final Jeopardy answer, Jennings, the closest thing to a supercomputer champion Jeopardy! has ever had before, graciously congratulated the victor with a Kent Brockmanism, writing, “I for one welcome our new computer overlords.”

Also from Jennings: “To the 149 Ken Jennings losers back in 2004: if you are cheering for Watson right now, I forgive you.”

So what does this whole (very well-executed) publicity stunt all mean? The New York Times speculates:

For I.B.M., the showdown was not merely a well-publicized stunt and a $1 million prize, but proof that the company has taken a big step toward a world in which intelligent machines will understand and respond to humans, and perhaps inevitably, replace some of them.

Watson, specifically, is a “question answering machine” of a type that artificial intelligence researchers have struggled with for decades — a computer akin to the one on “Star Trek” that can understand questions posed in natural language and answer them.

Watson showed itself to be imperfect, but researchers at I.B.M. and other companies are already developing uses for Watson’s technologies that could have significant impact on the way doctors practice and consumers buy products.