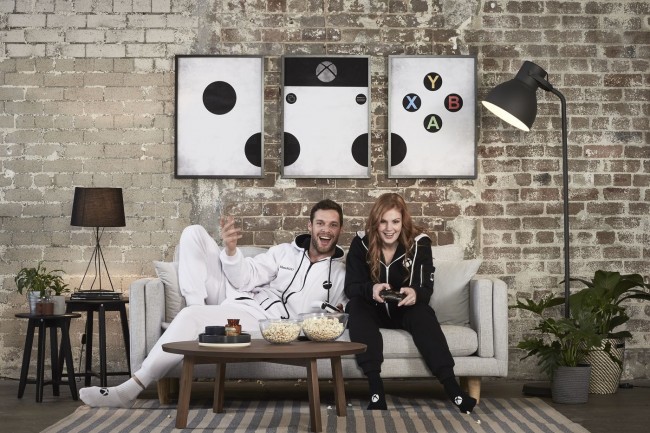 Listen: if you want one of these Xbox One S—ies (heh), I won’t judge. In fact, if you make the decision to wear one in public, I’ll likely (non-sarcastically) applaud your bravery while defending to the death your right to wear one, despite the fact that I would absolutely not do so myself. I mean it.

Anyway, Microsoft’s apparently coming out with some really interesting onesies that just so happen to be Xbox-themed. “But Jessica,” you say, “What the hell does that even mean?” Well, I’m glad you asked. And watch your mouth.

What this means is that the onesie has a bunch of features that are tailored to be especially helpful as you wear the thing while playing video games. There’s a few oversized pockets for your assorted peripherals, big enough to hold even your Xbox One controller as you do … whatever it is you do that isn’t gaming while wearing these things. Go to the corner store for a snack? Someone help me; I don’t understand.

Microsoft rattled off a full list of features in their press release, as shared with The Verge:

Of all the features, the most mystifying one has to be the forearm grips. Is that actually a thing people are concerned about? Do you actually go sliding out of your chair if your sweater or shirt doesn’t have “forearm grips”? Have I been playing video games wrong this whole time? I mean, the forearm grips just look like those leather elbow patches you see on professors’ jackets, except they got sewn on a little too far down the arm. The hood is oversized as well, allowing enough clearance for even the most football coach-sized headsets. Frankly, I think that’s fine, because I like me a good oversized hood, but everything else? Dang. Dang, I say.

I have one logistical question, though: How does one, uh, go to the bathroom in this thing? Is there a, uh … flap for your Brexit strategy? If not, do you have to strip down just to go? Because the same logistical problem plagues rompers and such, and lemme tell ya: It’s a total pain. If you’re wearing this thing in public and have to go to a public bathroom and have to strip down, let me just say: be very careful about it. You probably don’t want any part of the suit aside from maybe the feet to touch the ground.

Anyway, if you really do want to get your hands on one of these plush puppies, then you might be in for a bit of a wait or a decent import fee. These are only available in Australia and apparently don’t have a street date just yet. As Engadget reports, the pictured items “were created to commemorate a regional study regarding media consumption.” When asked, a Microsoft spokesperson said that “availability details about the limited edition attire will be ready ‘soon.'” Patience, young gamer. You’ll probably have these by Christmas, if I really had to guess.

You can see more images of the onesie (in both white and black) on The Verge.