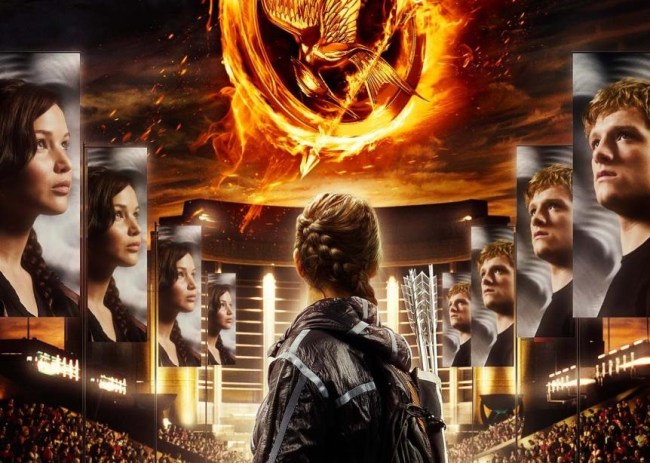 Irony has taken many blows in the marketing for Lionsgate’s adaptation of The Hunger Games, Suzanne Collins’ young adult trilogy about a society which transforms suffering and death into reality-show entertainment – but this one might be the death blow. Variety announced that Lionsgate has partnered with Dubai Parks and Resorts to open “The World of The Hunger Games” theme park.

The opening celebration for the park was held this Friday, October 20. “The World of The Hunger Games” will be the largest Hollywood-inspired theme park in the Middle East, with attractions like the Panem Aerial Tour hovercraft simulator, the Capitol Bullet Train rollercoaster, and the – I kid you not – Coal Miner’s Clash “festive, high-energy percussion show.” Guests can also shop at Peeta’s Bakery for food and Panem Supply Co. for merchandise.

Below is the promotional video for the park, shared by Dubai Parks and Resorts on YouTube. (And yes, it does look like Stanley Tucci got back into costume just to film this promo, but it may be the magic of CGI.)

Tim Palen, the chief brand officer at Lionsgate, said, “Dubai Parks and Resorts is a fantastic partner. Together we have created an interactive experience that allows fans from around the world a chance to immerse themselves in the world that Suzanne Collins created in an authentic, fun and exciting way.”

Honestly, we’re discussing a theme park which made a percussion show out of a rebellion that ends with the whole district getting firebombed, so there really isn’t much more for me to add. But it remains super-weird that The Hunger Games phenomenon has been adopted so straightforwardly, with no awareness or acknowledgement from the studios of how their marketing plays into exactly what the book’s critiquing.

It’s genuinely surreal – like, premise-of-an-SNL-skit surreal – to see them build a Hunger Games theme park in Dubai, a city which struggles deeply with income inequality, to promote a movie about how the rich make spectacles out of other people’s suffering. This is a book about dystopian child-murder, and we’re going to make it into a “fun and exciting” immersive theme park?

(And, yes, I suppose Star Wars is technically about anti-imperial warfare, and Harry Potter is about trying to stop a violent political movement built around “pure blood.” But those franchises aren’t also explicitly and scathingly critiquing the ways that fascism and late capitalism use media and spectacle to control people and cover over suffering – so their theme parks are definitely less absurd. Also, who in the world would want to live in Panem?)

The script for 2017 continues to keep things waaaay too on-the-nose.

(Via Variety and SYFY Wire; image via Lionsgate)