Deadpool is a Hufflepuff, According to Marvel Comics Canon

And this was a very deliberate choice, says colorist Nick Filardi. I don’t know about you, but one of the things I most enjoy doing with friends is Sorting fictional characters into the Hogwarts Houses from Harry Potter. (Yes, I realize this is a sign of incurable geekiness.) But isn’t it fun to take the characters of, say, Jane the Virgin or The Walking Dead and try to determine which House they’d be Sorted into? Apparently, the editors over at Marvel have already decided where the Merc with the Mouth will end up–he’s a Hufflepuff, through and through.

It’s true! Due to some Internet sleuthing, one Reddit user has uncovered the truth and shared it with the Harry Potter community on the site. In the below page from a Deadpool comic, Wade Wilson is on his merry way home with Harry Potter book in hand, patting himself on the back for having avoided spoilers–when some jerk in a car gives one of the biggest drive-by spoilers for the entire series: 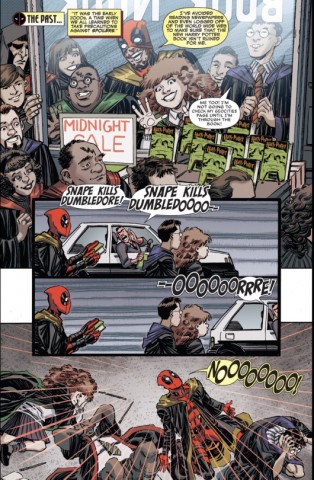 It’s then that you see that Deadpool is wearing none other than Hufflepuff robes, thus confirming his House allegiance. Originally, though, that wasn’t always the case–according to colorist Nick Filardi, that is, who shared this anecdote on the Reddit post:

Fun fact: I’m the colorist for that story and originally made him a Gryffindor. We went back and forth on a couple rounds of corrections and the editors insisted Hufflepuff. That isn’t a casual joke. That’s deliberate Deadpool cannon(sp).

Now that this factoid has been uncovered, what are your thoughts? Better yet, how would you Sort the other characters from Deadpool? I feel like Colossus would be in Gryffindor, but I’m still a little torn on Negasonic Teenage Warhead.