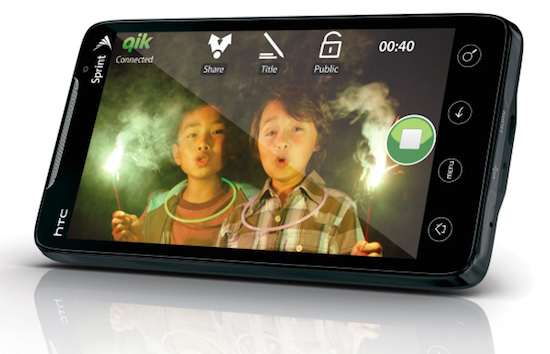 Sprint, the country’s third largest wireless provider, announced the HTC Evo today, showcasing the world’s first 4G phone at the communication industry’s annual CTIA event in Las Vegas. This new phone is by all accounts a beautiful beast, decked out with a 4.3 inch screen, two cameras, and Android 2.1; but more importantly, it is the first phone to run on a 4G network.

However, this souped-up phone raises one extremely important question: what exactly does 4G mean?

Simply put, 4G means fourth generation, implying that there were three generations of phones before today’s big announcement. And what that means is that it is time for a brief history lesson!

The first “1G” cell phones, released in the early 1980s, are the stereotypical “bricks” that you perhaps first saw being carried by Zack Morris on Saved By The Bell. These phones, the most popular being the Motorola DynaTAC, connected to radio towers using analogue transmissions, much like the way AM and FM radio work, as opposed to the digital method employed today. As such, these early phones had absolutely atrocious battery life, and even features like text messaging were unavailable.

1991 saw the first 2G network launch in Finland, which allowed for phones to transmit information digitally, laying the groundwork for the wireless systems we use today. Some networks still use 2G to this very day, and as such, the technology has evolved since its inception. Along the way, users have become able to send text and multimedia messages, as well as surf the web. Web surfing on a 2G phone is very slow, however, as the phone acts almost like a dial up modem; when you are online with a 2G phone, you can’t make or receive phone calls.

Jump forward to 2001 and Japan launches the world’s first 3G network, with Europe following in 2003 and America shortly thereafter. This allowed for the modern cell phones we see today, which can pull down website and email at acceptable speeds. The most commonly used 3G networks also allow users to access the internet while making a phone call – quite the boon for a road warrior with a dead laptop. While early 3G phones had somewhat uncomfortable web browsing experiences, the launch of the iPhone 3G and 3Gs has revolutionized the way people view mobile browsers, leading to the explosion of wireless data consumption that we have seen today.

As people have come to expect more and more out of their wireless phones, 3G just can’t keep up, which is why 4G was first launched in 2008, while some providers (we’re looking at you T-Mobile!) were still struggling to build out their 3G networks. Sprint, and its partially owned subsidiary Clearwire, have been way ahead of the other networks with this, already covering 34 million people, with 120 million expected by year’s end. Up until now, 4G has only been available for wireless data cards and the innovative Overdrive – a device which pulled down 4G data and then spat it back out over WiFi for other devices to connect to.

4G lets users do some amazing things, with Sprint’s current implementation averaging speeds of 3 to 6 megabits per second, and bursts hitting 10 Mbps. That’s faster than some people’s home broadband! Activities that used to be painful on 3G, such as streaming videos or downloading large attachments, are now a breeze.

4G is not, however, a cure all for all our wireless ills. No matter how fast your connection, wireless internet will never be good for hardcore online gaming. That’s because the limiting factor is latency, not speed. As the game data has to travel from the other users, to the server, to the base station antenna, and then to your wireless card, there is simply too much space between transmission points to ever get rid of all the lag.

Another problem is data usage. Most supposedly “unlimited” plans cap users at about 5 gigabytes. If you go over, you get charged way more money. As Internet connections become faster, people are going to burn through their quotas quicker than ever, getting a nasty surprise in the mail a month later. Lastly, if too many people use 4G too quickly, the networks will get saturated, similar to what some iPhone users have been experiencing on AT&T. There simply won’t be enough capacity for everyone at the same time.

That said, the upsides vastly outweigh the downsides, making this new phone a very big deal for Sprint. In the last few years they have been struggling against much larger Verizon and AT&T, losing hundreds of thousands of subscribers each quarter. The HTC Evo may be Sprint’s best bet for turning its fortunes around.

Inside the Evo is a 1 gigahertz Snapdragon processor, 512MB of ram, and 1 gig of built in memory. On top of those screaming specs are a 480×800 display, as well as two (count em!) cameras, the better of which packs 8 megapixels. Running it all is the newest version of Android (2.1), as well as HTC’s Sense UI for a little extra eye-candy. All told, this looks like an amazing phone to finally make use of Sprint’s fancy new network, and it may just be their best bet for reversing their falling fortunes.