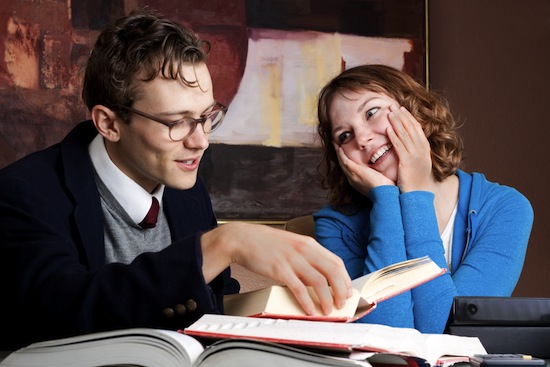 Semiconductor company AMD recently published a guide to getting a geek guy in five lessons. It is either a fiendish, deliberately outrageous troll post to get blog links (success!) or merely a patronizing dispatch from a bizarre mirror universe governed by high-schoolish social rules and wince-inducing gender norms. Offending geeks (male and female) and women alike! Let’s run through the steps:

0. The title and introduction

First, the post is actually called “Get a Geek in Five Easy Lessons”; no mention of gender or orientation, but it’s written entirely for women pursuing males. Ok. Why should these women want a geek, anyway? Quotes from the article, italics ours:

“If nothing else, they will always be able to fix the TV, your PC, and the sprinkler system in a pinch.”

Um, ok. This is ironic, right?

“Yes, they have way too many gadgets, but come on, how many shoes do you have? How about just the black ones?”

At this point, alarm bells are going off.

This one’s fine. They provide a glossary of tech terms by AMD. Kinda tech specific, and doesn’t deal with the many other facets of geekdom, but we can deal.

“I know, I know. But, just think…he will never want to get a mani/pedi with you.”

This is the first of several hearty “aargh”s to come.

“You don’t really have to understand what these questions mean, but throw them into the conversation and then act interested when he answers. (Actually, this works for pretty much any topic.)”

Aargh. As the hilarious MetaFilter thread on this post, titled “is 3D just a niche?”, illustrates, asking this question is a good way to be greeted with universal derision by geeks.

They recommend Blade Runner, The Matrix, Tron, District 9, The Sims, and Lego [not sure if that is the Lego video games or actual Legos]; no complaints. The “music” part comes out of left field though:

“Music is tougher. I find it impossible to listen to music I don’t like. I don’t care if he can get my alarm clock to make a Venti Soy Latte, I’m not spending the rest of my life with a man who’s into country music. But that’s me. If you can stomach tearjerker lyrics, more power to you.”

lolwat. Has there ever been a stereotype to the effect that “geeks love country music with tearjerker lyrics?” Chiptunes or Weird Al, maybe.

“Most geeks don’t wear pants. They wear jeans or shorts. Just get over it and wait for the ring to diversify his wardrobe. But if flip flops are non-negotiable, I understand.”

AARGH. In conclusion: Men are from Nerd-Mars, Women are from GirlyLatteShoes-Venus, and geek-males are to be snared with a marriage to make them wear pants and fix your PC and sprinkler system. No thanks. Sorry we made you read this article, people who are sane.