How to Become Batman: Bad Idea. | The Mary Sue

Is It Possible to Become a Real-Life Batman Using Modern Technology? 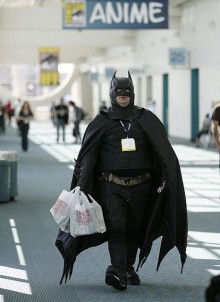 Batman is a most alluring superhero for geeks because he doesn’t have an adamantium skeleton or the ability to fly: He’s a regular old extremely strong, extremely intelligent billionaire equipped with amazing technology, just like you and me. So whereas most forms of superherodom are out of human reach, in theory, it’s possible for some people living today to become Batman using the right gadgets.

But where theory meets practice, is that a good idea? Screenwriter Mark Hughes says no. In a great Quora answer for which we hope he wins some sort of screenplay commission or related gig, Hughes recounts the steps one would have to take to even approach Batmanhood:

If you joined the military and became something like a Delta Force commando of the highest quality, while studying nights to get a double-major in criminal justice and psychology, with a minor in chemistry, you might also have time to take weekend courses in detective work and get a P.I. license. Then, after probably 10 years to reach all of those levels combined, you might be 28 (if you started right out of high school) and would then need to maintain your physical level while getting a job as a police officer in order to learn real crime solving and detective work on the streets and at crime scenes, to get the experience it would really take to be a master. Let’s say you are so good it only takes you perhaps three years to become a top detective and expert in these regards — now you are 31, and just finished the most basic level of preparation you need to be an expert in just some of the most obvious fields required to match Batman.

Now you have to quit the force now, and develop a good cover story for yourself so nobody suspects that Batman might be the guy who is an expert in all of those fields Batman is a master at. You have to have made sure you lived your life never revealing your true feelings about crime and vigilantism etc, and in fact covering it up unless you want to be arrested as a suspect the first time Batman has been around town. You need to spend some time doing dry runs around town to find your away around rooftops and fire escapes, practice running around at night in the shadows and not being seen, and presumably start practicing using your ropes and grappling hooks and other equipment you need for nightly patrols. Do some dry runs, make final preparations in case of emergencies, etc.

And you need to have been investing money and amassing a fortune the entire time, because the technology you’ll need to even get close to a real-world version of Batman will cost millions of dollars. So you’ve done that, and now you start spending the money to get an armored suit full of electronics to communicate with assistants and have night vision and so on. You need a base of operations, so you buy one of those old used missile silos the military sells (yeah, they really do that, and it’s pretty cool inside them) and turn it into a secret headquarters for the computers and monitoring equipment and car and bike and other equipment you need for your vigilante life.

The problem: Even after all that training, there’s not much role for a real-life Batman in our current society, beyond low-level drug busts. Some Hacker News readers responding to Hughes’ (much longer) piece speculate that a real Batman could have a role in, for instance, Mexico’s endless, brutal wars, but he might have a much harder time sticking to his rule of non-lethal tactics.