How Killmonger’s Misogyny Teaches Us About Western Patriarchy 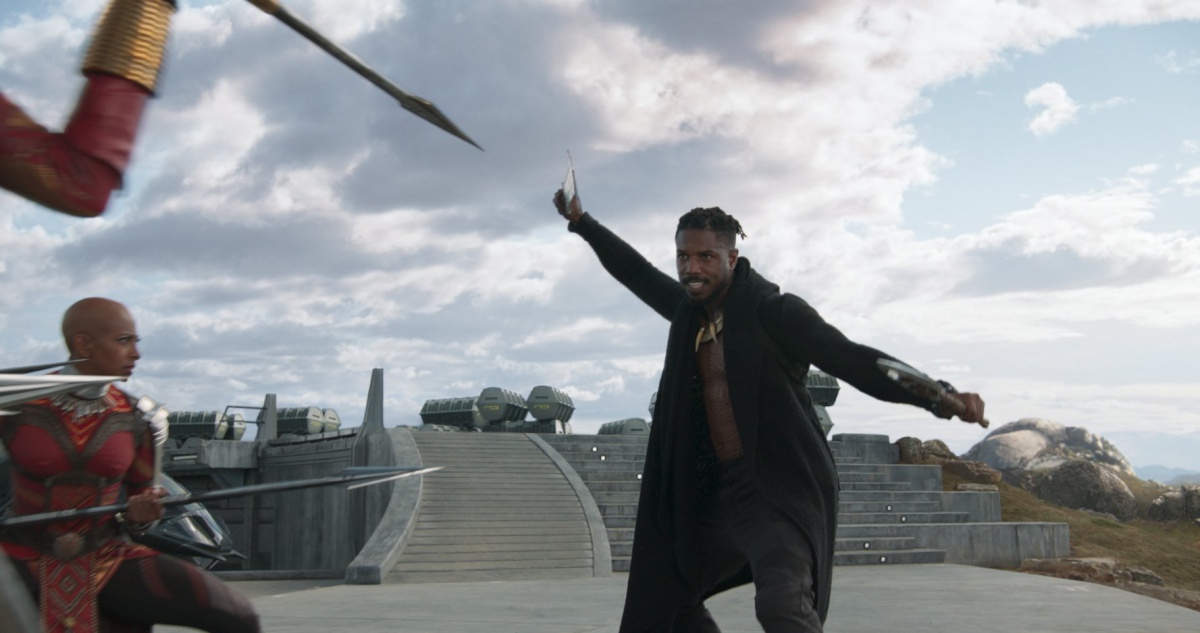 I loved Killmonger’s character in Black Panther and I felt like it was both liberating and cathartic to see black rage (and I say rage rather than frustration on purpose) on screen. As I wrote before, and as this amazing Atlantic article broke down, Killmonger is an expression of The Void:

The Void, the psychic and cultural wound caused by the Trans-Atlantic slave trade, the loss of life, culture, language, and history that could never be restored.

Plenty has been said and will be continued to be expressed, about how Killmonger’s character talks about the African-American experience. But we would be remiss if we ignored that his perspective is that of a black man in America.

In fact the only, we can assume, African-American woman in the film with Killmonger, Linda played by Nabiyah Be, gets shot by Killmonger when she is no longer valuable. That character, although she has no name and no real dialogue shows us a lot. In the journey of healing for the black man, where does the black woman fit in?

It is a question black female authors have talked about at length. From the works of Zora Neale Hurston to Ntozake Shange to Alice Walker and modern day black feminists, they have brought to light the ways in which black men absorb and emulate white patriarchy in order to rebuild and reassert themselves as men from the trauma of slavery.

Yet the female trauma: rape, being used as a broodmare, being forced to raise other people’s children while never having ownership of their own, and of course, a reduction of their own womanhood.

When the film version of The Color Purple came out, there were massive conversations between black men and black women about how black women felt like their needs and desires were being sacrificed for male pride. That they were expected to lift up black men and the black community, but in return, they were not given that same support back. One man, when interviewed about conversations he was having with his female friends said:

”The most frightening thing for me as a male was to look into their eyes,” Mr. McDuffie said. ”I wondered, ‘Is that really what they think of us?’ It’s as if there were an element of cruelty implicit in black men that all black women seem to identify.”

That cruelty is very much present in Killmonger’s interaction with women. The way he dismisses Okoye’s words in favor of being hyped up by W’Kabi. W’Kabi’s own fragility is allowed to come to the surface when he is faced with feeding his own desires for vengeance, versus the greater good of Wakanda. To heal his own pride for how he was wronged by a white man, he was willing to go against his people, his friend, and the woman he loved.

In plays like Fences and A Raisin in the Sun, we see African-American men who are broken down by their subservient jobs under white people in their careers and therefore, in order to heal themselves, come home and act out their hyper-masculine dance with their wives and children. That is how they have been taught to be men, by standing on the necks of those who have less than them. Except with black men, and men of color in general, when they have absorbed enough of that brainwashing, feel like they have to step even harder.

In “What We Believe” in the Combahee River Collective Statement of Black Feminists they state:

Above all else, our politics initially sprang from the shared belief that Black women are inherently valuable, that our liberation is a necessity not as an adjunct to somebody else’s.

Our politics evolve from a healthy love for ourselves, our sisters and our community which allows us to continue our struggle and work.

We reject pedestals, queenhood, and walking ten paces behind.

A queenhood that expects you to be an accessory and not a leader is not a queenship black women want, because it is not an ideal made by them. It is an ideal that men want them to have. That’s why Killmonger doesn’t bring Linda with him to this promised land of Wakanda. This is his journey to reclaim what has been stolen from him. His princehood, his power, his masculinity. Linda is an accessory and therefore when she becomes more of a hindrance than an asset she can be shot down easily.

That behavior is learned behavior and it is very much a Western standard. One of the things that has been fascinating to learn as I’ve worked on the Black History Month posts is just how much colonization and Western imperialism have thrust their patriarchy onto African tribes. This isn’t to say that without colonization Africa would be a place of gender equality, but it does show how Western civilizations attempt to “modernize” and “de-savage” the dark continent was by infusing its own ideas of masculinity and paternalism.

Which is why Wakanda, untouched by that mentality, can give us the Dora Milaje, it can give us the female character of Shuri, and show us female and male tribal leaders working side by side. Even in T’Challa’s second trip into the spirit world, we see evidence of female Black Panther leaders and for those who read the comics, they know that Shuri herself has taken up the mantle of Black Panther before. Even when M’Baku protests Shuri being in charge of the Wakanda’s weapons, the objection is not because of her gender, but because she is only 16. We also see a female Jabari Tribe member during the final battle.

What makes Killmonger such a wonderful character is how brilliantly tragic he is, but part of what makes him that monster is him embracing too much what he has been taught is the way. He has learned how to colonize and he has also learned a false narrative of masculinity. He wants to free his brother and sisters from oppression, then maybe he should have brought a sister with him on the road to revolution.