How Far Into the Manga Is the Sixth Season of My Hero Academia Going to Go?

Time to go to war. 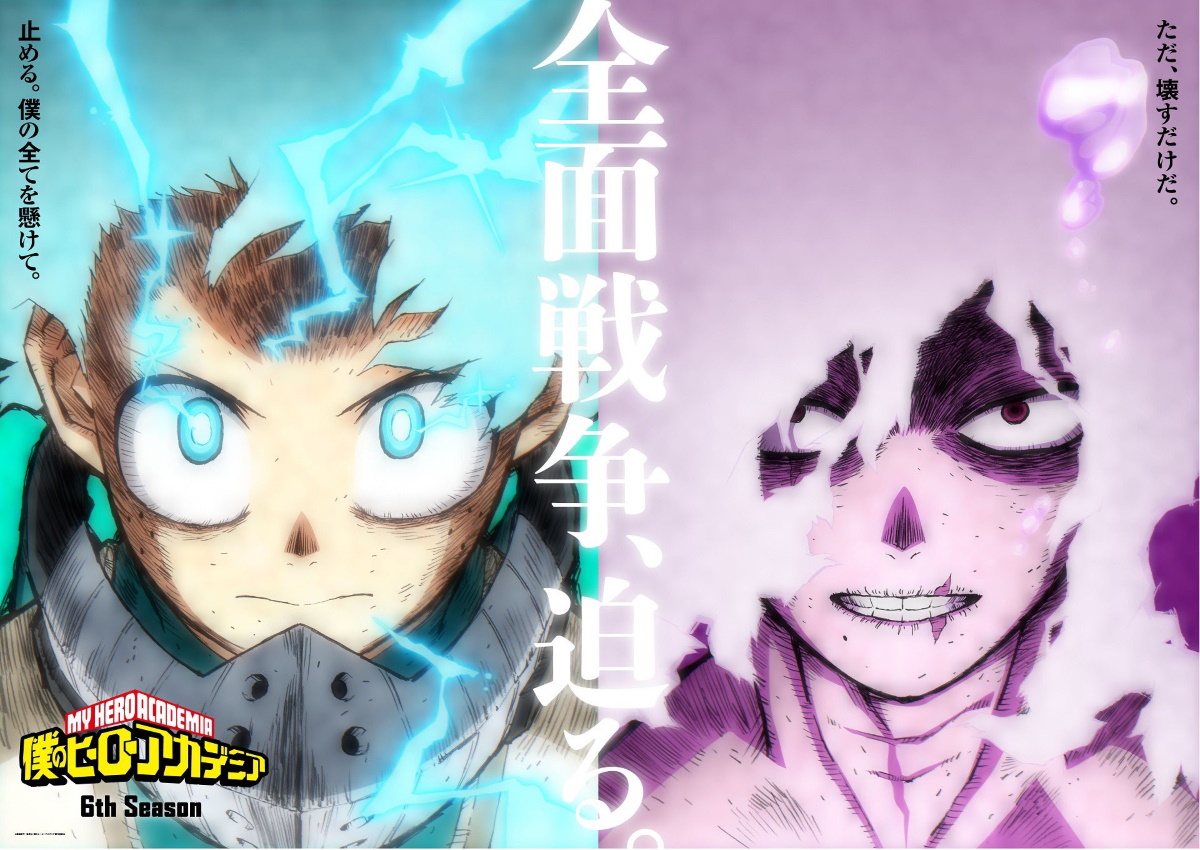 Spoilers for My Hero Academia manga so far

No one was surprised when the My Hero Academia anime got announced for a sixth season. A few weeks ago, a new visual was revealed that showcased the red shoe-wearing good boy, Deku, ready to go all out against the video game reference-making villain, Shigaraki—who also wears red shoes.

I just think the shoes are an interesting parallel, is all.

As someone who reads the manga on a weekly basis, I look forward to seeing how the anime brings this hard-hitting battle to life. A lot goes down in this war between heroes and villains, proving that, once again, no teenager can just go to school like a regular kid in this universe.

In thinking about what’s to come for the anime, I can’t help but wonder just how much from the manga is going to be shown in this upcoming season. Season 5, for example, had three arcs animated (The Joint-Training Arc, Endeavor Agency Arc, and the Meta Liberation Army Arc) and hints at the upcoming arc we’re about to witness.

While I’m sure they could do multiple arcs in the sixth season, the Paranormal Liberation War Arc is so big that I really do think it could be its own season, especially since the arc after it feels like the beginning of the end, as in, the end of the entire series.

I always thought we’d get to see these characters go through all three years at UA, but with the way things are going, I get the impression that this isn’t going to be a One Piece or Naruto and will end a lot sooner than I ever imagined.

According to the My Hero Academia Fandom Wiki page, the Paranormal Liberation War Arc is 54 chapters of the manga. Admittedly, when I’m reading, I don’t keep up with what chapter issues in a new arc, but I can tell you that this war is a HEFTY amount of content.

The Paranormal Liberation War Arc is one of the most significant arcs of the series, not just because it’s the first time Deku and Shigaraki really get to go at it against it each other, but because the outcome drastically changes the tone. Normally, there’s some kind of hopeful message at the end of these arcs as Izuku “Deku is the name of a hero” Midoriya continues to move forward in achieving his dreams of becoming a hero.

But this is the arc that leads to the general public no longer trusting heroes.

Things were already rocky to begin with after All Might’s retirement, but this arc leads to a rather dreary series of chapters where the world decides that it would rather go on without heroes than continue to rely on them all the time. It’s perfect for the villains, namely, All For One, who has, of course, been plotting while in prison.

There are a number of things that lead to this, one of the biggest being the reveal of Dabi being a Todoroki – something fandom had predicted years ago, but seeing it all play out along with the aftermath makes for a major turning point in the series that favors the villains. That reveal alone could take a couple of episodes because Dabi kinda has his own little Maury moment and releases a video for the whole world to see, then he just… airs all of the Todoroki family dirty laundry, hell, he brings a DNA test to prove that Endeavor is his dad.

This is easily a multiple-episode moment. This doesn’t need to be rushed to try and fit in more content, let this moment breathe, please, I beg.

But that’s just ONE “running off stage dramatically” moment in a slew of many. This arc has a lot of monumental fights, some character deaths that hurt real bad (omg Twice), a lot of close calls (Hawks, Mirko, the list goes on), Kirishima fighting Gigantomachia with his classmates, Bakugo’s “my body moved on its own” moment so he can protect Deku, Mirio coming back, Best Jeanist not being dead, and, to top it all off, the arc ends on a grim note because Deku leaves his friends and family behind, coming to the conclusion that he is putting everyone at risk since All For One wants his quirk.

There’s just SO much to get through that I think it needs an entire season.

I kinda hope it ends on that downer note, to be honest. It gets resolved later with the class coming together to drag Deku back to the nearest bathtub (I’m not kidding, they give the boy a bath), but I think the weight of Deku finally accepting that he doesn’t have to do this alone can be saved for season seven.

And I definitely think the introduction of new characters (Star and Stripe) and potential traitors can wait until season seven.

I think the war should stand on its own to give all of its major moments a chance to shine, especially if my gut feeling is right and that, after the war, we’re headed toward the end of the series.

What are your thoughts on the upcoming season of My Hero Academia? Do you think this arc is enough content to fill an entire season? How far do you want the season to go?