House of Cards Has Always Been Claire Underwood’s Story Anyway 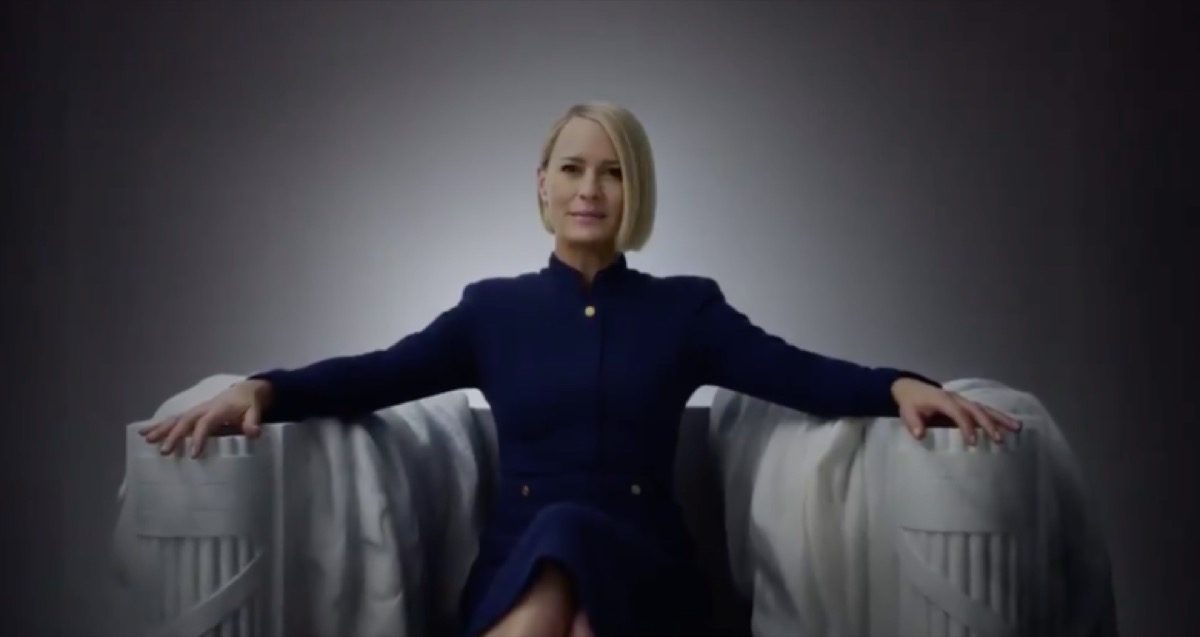 Netflix’s first original series, the political drama House of Cards, will launch its final season on Friday, following a flurry of controversy. The show’s sixth season was generally assumed to be its last well before it was announced as such in 2017. However, once star Kevin Spacey was abruptly terminated from the cast following a series of detailed and disturbing sexual assault allegations, it was unclear whether the end of the Frank Underwood saga would ever even see the light of day.

Following a brief suspension of production—and what was surely a burst of behind-the-scenes activity among Netflix execs—the company ultimately decided to push forward with a truncated final season and a whole new focus: Spacey’s costar, Robin Wright. In the one bit of fortuitous timing in this whole awful situation, in the world of the show, Wright’s character Claire Underwood had just taken over the presidency from her recently resigned husband. Claire ended Season 5 staring directly at the camera and declaring, “My turn,” a powerful assertion that everything that had come before was about to change.

In many ways, House of Cards has accidentally stumbled onto its perfect ending. Though Frank may be the series’ marquee figure, with his overbearing Southern accent and Machiavellian zeal, Claire is the show’s dark heart. Yes, we watched Frank manipulate and murder his way from the House of Representatives all the way to the White House, but he never would have made it there without Claire. Likewise, the show never would have survived without Wright, who consistently turned in nuanced, riveting performances that, while perhaps less showy than Spacey’s fourth wall-breaking monologues, were no less powerful.

Frank may be the proverbial face of the franchise, but in truth, House of Cards has always been Claire Underwood’s story, and though the reorientation of her character as the series’ declared lead in Season 6 may have been unplanned, it also feels as though it’s where the show’s always been going. Claire’s journey is the centerpiece around which House of Cards has always revolved, whether Netflix wanted to admit it or not, and Frank’s apparent death—the Season 6 trailers revealed Claire at his graveside—is a perfect setup to let her character step forward in her own right at last.

Ostensibly, House of Cards is Frank’s story—the tale of an ambitious and vindictive politician in search of power. The series’ plot is initially driven by his anger over a presidential cabinet snub. Think of how different the show might have been had President Walker simply named Underwood Secretary of Defense at the start! But ultimately, it evolves into a quest to found a political dynasty. Frank’s ambition is clear from the series’ opening moments, but even then, Claire is always there in the background, a Lady Macbeth helping steer her husband to greatness to satisfy her own ambition, as much as his.

Claire and Frank are, in a way, two sides of the same coin. She, too, is icy and calculating, ruthless and cunning. Yet, unlike Frank, we aren’t allowed to forget that there are costs to Claire’s choices, and that she’s given up plenty to get where she is. Though she’s a formidable, successful woman in her own right, she’s constantly asked to take the back seat to her husband, giving up her own job and personal ambitions while encouraging all of his.

Unfortunately, this isn’t an unusual position for women in drama—or in public life, for that matter—and it’s part of what makes Claire’s story so compelling. Who hasn’t done something at least vaguely similar? What woman hasn’t performed a thankless task for which a man inevitably gets all the credit, despite having done little of the work?

Yet, despite her similar willingness to commit increasingly terrible acts in the name of gaining personal power, we get to see Claire’s descent into darkness in a way that we never do with her husband’s. For most of the series, Frank’s character undergoes little growth or change. He’s a selfish monster, but that’s been true since House of Cards’ first episode.

No matter how many careers he destroys or lives he takes, these events appear to have little emotional impact on Frank. He doesn’t wrestle with his decisions or openly question his choices to any great degree, nor does he display much uncertainty or weakness—except, occasionally, where Claire herself is concerned. As a result, he doesn’t have much by way of an arc, just a string of increasingly despicable and outrageous actions.

Claire’s story, on the other hand, contains real moments of vulnerability, even at her darkest points. She’s a sexual assault survivor who must watch her rapist get promoted to a four star military general—but then uses her political position to out him in a CNN interview. She feels genuine remorse over the suicide of an activist in Russia, and her emotions lead to an ill-advised political statement that angers her (now president) husband.

She helps her terminally ill mother commit suicide, but also uses her death to help win the nomination to the vice presidency. Claire contains multitudes in a way that Frank does not, which is precisely why the prospect of a season focused solely on her character is so enticing.

At the end of Season 5, Claire commits her first murder, poisoning her lover Tom simply because he knows too much about the crimes she and Frank have committed. This is especially horrifying because the show leads us to believe that she does feel something approaching love for this man. Yet, she watches him die with almost clinical detachment, the culmination of several seasons of growing darkness within her.

In this moment, Claire is truly terrifying in a way Frank has never been, for all that he’s had a hand in the violent deaths of over a half-dozen people at this point. (For some perspective: When he murdered a lover, he shoved her in front of a train.) But we’ve seen how Claire got here, and somehow that makes her even more frightening. If she’s willing to take such a step, at last, then what wouldn’t she do, if given the opportunity?

Season 6 offers the promise of Claire Underwood unleashed, free of both Frank and the moral expectations of being a woman who does the right or expected thing. A Claire who doesn’t play second fiddle to anyone is an inherently fascinating creature and one which, quite frankly, we deserve to spend more than eight episodes with—but we’ll take what we can get.