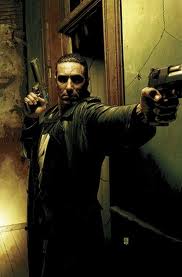 ABC Studios has sold an hour-long police procedural script to FOX based on The Punisher. If you’re wondering how that is possible, ABC Studios is owned by Disney, and Disney owns Marvel. Former Chicago police officer Ed Bernero, who had done previous work on Third Watch and Criminal Minds, will executively produce the series. For Punisher fans hoping this never comes to fruition, I’m sorry to say, FOX has already committed to shooting a pilot, so at the very least, there will be one episode floating around at some point.

The FOX series will focus on NYPD detective Frank Castle, whose alter ego is a vigilante seeking justice for people who slipped through the justice cracks. Punisher will obviously be wary of that description, as the sentence makes it sound like Frank will be on the force by day and murdering criminals by night, rather than not on the force at all and living in a sewer. English is a funny language, though, so we can only hope that the NYPD detective bit is referring to Frank’s past, not his present.

It’d also be important to note exactly where FOX plans on airing the show, as the series generally features Frank murdering fellas in gruesome ways, with an uncaring, emotionless attitude — something basic cable probably isn’t too hip to see on a weekly basis. On top of that, the best of the series usually focuses on extremely unsettling themes and imagery, from underage sex trafficking rings, to cannibals, to a very large amount of eye-stabbing.

Punisher fans tend to dream of Frank coming to the small screen on a channel like HBO or AMC, where content usually wins out rather than censorship or showrunners being too afraid to take the show in a certain direction from the start. Another channel that could tastefully house worthwhile Punisher content would be FX, which just so happens to be owned by Fox Entertainment Group, the company that owns FOX, who bought the Punisher script. It’s a long shot, but maybe the show will air on FX, a channel that doesn’t have a problem dealing with delicate themes and graphic imagery. Still, one wonders if a major audience would accept following someone as distant and solitary as Frank as a character if not done in the fan favorite film noir Punisher style, which sees Frank narrate just about everything he’s doing in order to bring the audience closer to the character; a character that barely has extended interactions with people he isn’t going to murder.