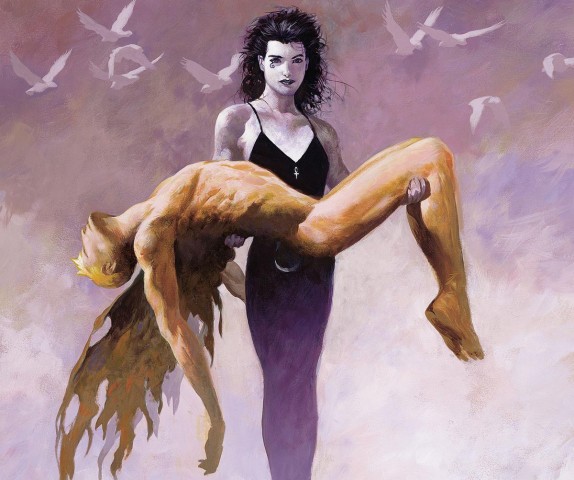 Neil Gaiman’s Sandman series is widely considered to be among the best when it comes to comics. It’s one of the titles that helped redefine the comic genre and showed all the bizarre and beautiful ways comics could tell intense, philosophical stories. Sandman also inspired the brilliant spin-off Lucifer, a story about the devil deciding he no longer wants to be the lord of Hell and what implications that has for the very nature of good and evil. Now Lucifer is back on the stands again. We spoke to the series’ new author, Holly Black, about her plans for the complicated prince of darkness.

TMS: Is Lucifer the first major comic you’ve worked on? How does it compare with other writing you’ve done?

HB: Writing Lucifer is the first time I’ve done any kind of weekly, single-issue comic. I’ve written graphic novels before, but never individual stories that have to add up to a satisfying larger story. One of the reasons I wanted to do it, other than my love for the character, is that I wanted to learn more about this kind of structure and while it’s been challenging, because writing a comic isn’t entirely like writing a short story or a novel, I feel like I am finally finding my footing.

TMS: What initially appealed to you about Lucifer and his world? Are you a long-time fan?

HB: I am a long-time fan, both of the Lucifer in Neil Gaiman’s Sandman and Mike Carey’s Lucifer series. In fact, when I was first approached to do this, I had no idea how I was going to fit it into my schedule. But, I mean, when the devil comes calling, I guess you make room.

TMS: Are you planning to largely follow the lead of the original series in terms of story-telling or do you have some ideas took take things in a new direction?

HB: I think for this Lucifer to be satisfying to new and old readers, I am going to have to do a little of both. I’d like to think that this Lucifer is grounded in Mike Carey’s original series, but where it’s going is new. That said, the story of Lucifer, to me, is always a family story and a dynastic, so there’s no getting away from that. It’s about fathers and sons, kings and princes, as well as also the ineffable.

TMS: The original Lucifer series focused on themes of fate, philosophy, and forgiveness. What sort of themes are you planning to explore?

HB: I am going to answer this as best I can, because there are some themes I am deliberately playing with and there are some themes that rise up organically as you write. Mike Carey has talked about his Lucifer as being, in part, about growing up and moving away from home and parental authority. This Lucifer is about coming back home and being drawn into old conflicts (and repeating old patterns) no matter how much you swore you never would. I think fate and forgiveness factor in, but there’s also a lot about the paradox of evil.

TMS: Have you written any new characters who you’re excited for readers to meet?

HB: I am excited about the human characters, Rosemary, Medjine, and Lorin in particular. And there are few other new characters coming that I can’t really talk about, but I am excited for them as well.

TMS: What’s your take on the new Lucifer TV show?

HB: I’ve only seen the pilot as I am out of the country, so I will have to wait to get back to watch the rest. I loved seeing Lux. I loved seeing Amenadiel. It’s so far from the comics that it threw me at first, so I am waiting to see where it’s going.

TMS: Can you give us any hints about what’s in store for Lucifer in the next few issues?

HB: We’ve been in Los Angeles and we’ve been to Hell, so our next stop is the Dreaming, where we see some old friends and have a few visions.

TMS: Is there anything else you’d like to mention?

HB: Just what an honor it has been to work on this book. I am thrilled to be doing it.

Holly Black’s Lucifer can be found at your local comic store.