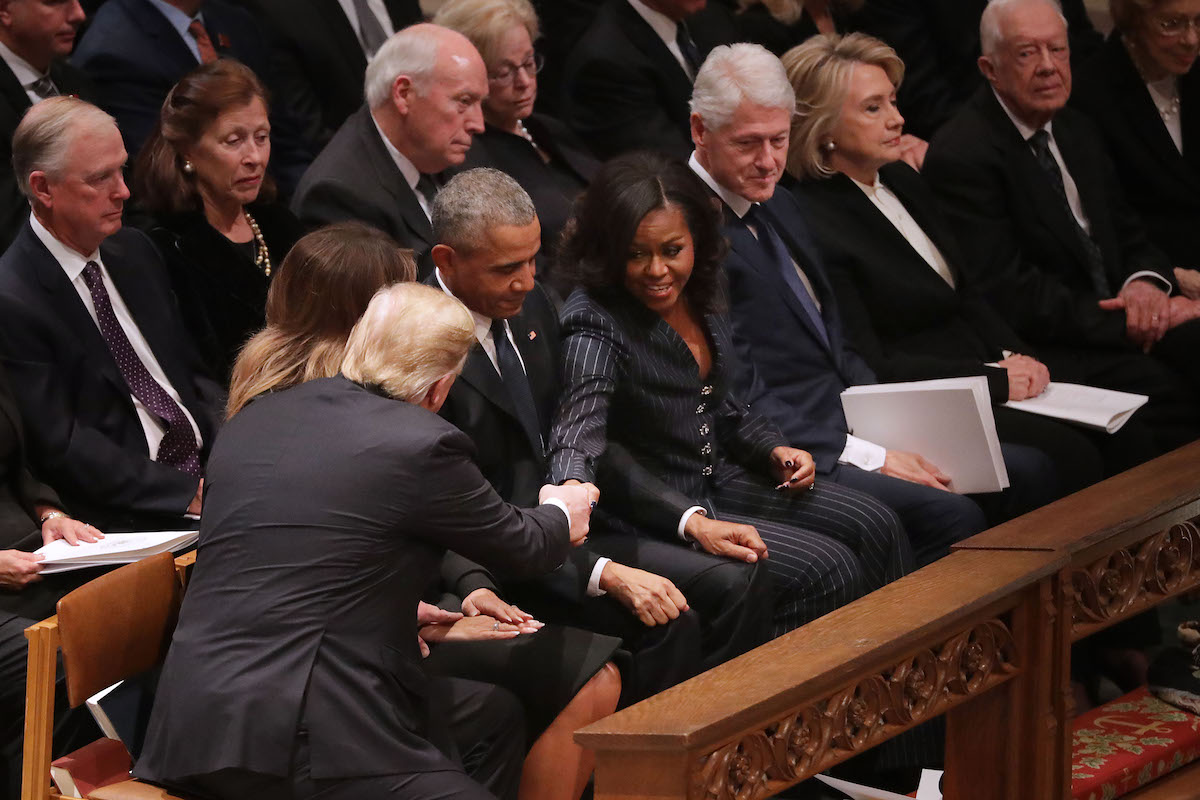 Yesterday was George H.W. Bush’s memorial service and every living president and vice president attended, sitting together in the front pew. Sitting next to her husband was popular vote winner should-be-president Hillary Clinton, and seeing as Donald Trump continues to speak and tweet about how he believes she should be in prison on a near-daily basis, I don’t think anyone is reaching in calling her body language towards him, let’s say, chilly.

They both refused to look at each other or shake hands, which, again, is understandable since he still uses her as a deflection prop more than two years after their race ended. But a whole lot of news outlets and pundits have decided this is worth criticizing.

Clinton was even criticized for things she didn’t do, as per usual. MSNBC’s Chris Matthews, who has a long history of making gross, misogynistic comments about Clinton, apparently speculated that she and President Jimmy Carter don’t like each other because I guess at one point they were leaning away from each other and not speaking. Which is a weird thing to state since during plenty of other moments, they looked like this:

The media never tires of lying about Hillary Clinton. Chris Matthews said “She obviously doesn’t like President Carter. She’s sitting right next to him and hasn’t said one word to him.” So I rewound, and found this! #Msnbc #Hardball pic.twitter.com/mRFHWT8Nh4

So Hillary Clinton was criticized for not smiling enough and not making eye contact with the man who has spent three years regularly calling for her arrest, and then when she is smiling and talking amiably, it’s just flat-out ignored.  Yup, that sounds like the Hillary Clinton coverage I remember.

As for Donald Trump, the coverage could not be more different. Politico praised him for his “surprise display of decorum,” apparently just for showing up in the first place and not yelling at everyone.

“On Monday evening, Trump channeled a kinder, gentler version of his wrecking-ball spirit,” they wrote. “He paid a surprise visit to the Capitol, where Bush’s casket is lying in state. A president who rarely passes up a chance to speak his mind offered nothing in the way of commentary but a silent salute. The White House’s official Instagram feed featured an image of the 41st president’s portrait, draped in black cloth.”

Trump, too, reportedly thought he deserved to be declared a hero for doing the bare minimum. According to The New York Times, he’s super jealous of all the attention Bush has been getting this week due to his, you know, death, and Trump can’t wait for everything to be about him again.

Trump has been snappish with aides most of the week, miffed in part by so many ceremonial events not related to him. He was impatient for the memorials to end but expressed pride in himself for remaining publicly civil. https://t.co/IfK2nd5XSo

So Hillary Clinton was condemned for ignoring Trump, while he received no criticism for shunning her.

Watching people drag Hillary for not acknowledging Trump is a reminder that women who face misogyny are often held to a higher standard in their ability to take the “high road” than actual misogynists. We have to stop counting on women to do things to prop up fragile men.

Similarly, Michelle Obama was expected to be civil to the man who spread vile, racist conspiracy theories about her husband.

It’s a sad reminder that people of color often have to go through the sickening experience of taking the ✌🏾high road✌🏾when it comes to racism. I generally believe this is just who the Obamas are, but any other reaction, they would have taken the brunt of the criticism. https://t.co/FrDJf2new7

Meanwhile, Trump gets to literally just show up, slouch in his seat, and do nothing else, not be cordial, not participate in any way.

This is your “Christian” evangelical president. pic.twitter.com/u0478FoSyR

And with that, he’s celebrated as being especially “presidential.”