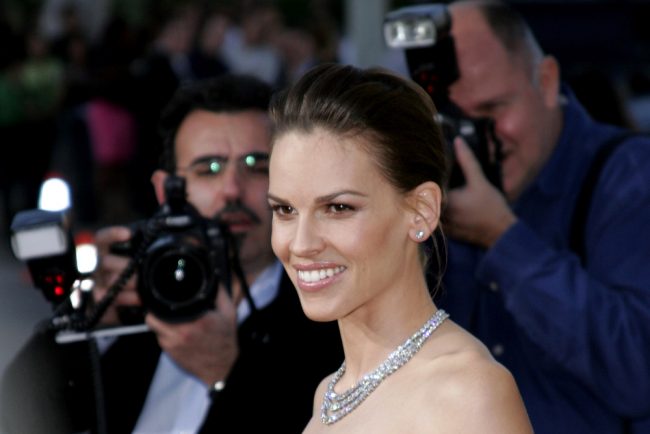 Hilary Swank has joined the cast of I Am Mother, a new science fiction film from Australia. It’s being produced by a smaller, indie studio, but Swank’s casting brings some big-name recognition to the project. She joins Clara Rugaard (Still Star-Crossed), Luke Hawker (the Krampus from Krampus) and Tahlia Sturzaker.

Below is the film’s summary, courtesy of The Hollywood Reporter:

“I Am Mother portrays a teenage girl (Rugaard) raised underground by a robot mother designed to repopulate the earth following an extinction event. Their unique bond is threatened when a blood-drenched stranger, played by Swank, is taken in by the teen, only to find herself at odds with her gear-and-piston parent. Overnight, the stranger casts doubt on Mother’s claims about the outside world and begins to unravel the fabric of their insular family. Unsure whom to trust, the girl begins to probe into Mother’s dubious nature and uncovers the truth of her greater mission.”

The movie will be directed by first-time director Grant Sputore from a script by Michael Lloyd Green.

Now, as long as this doesn’t morph into some weird libertarian fable about the danger of the nanny state – always a depressing possibility – this sounds like a pretty awesome premise for some women-centered science fiction. Badass women busting each other out of bunkers turned out super well for Mad Max: Fury Road, so here’s hoping.

Given all the cool concepts they’re pushing forward with, Hollywood seems pretty enamored with science fiction at the moment. From auteur French films about prisoners in space to the adaptation of The Martian author Andy Weir’s Artemis, they’re throwing it all at the wall. Given the advances in CGI and the appetite for superhero movies, I’m not surprised that studios are taking advantage of the genre, but I’m curious how they’ll all perform in a more crowded market – and, perhaps more importantly for their success, how new, original properties like I Am Mother will be marketed in an era where studios seem so invested in licensed, franchise-building movies.

(Via Variety and The Hollywood Reporter; image via Shutterstock)